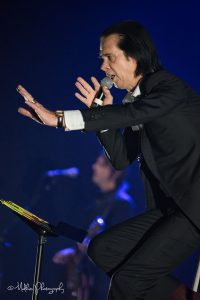 Nick Cave has replied to the BDS campaign which was attempting to stop him from playing in Israel tonight. The campaign which is attempting to put pressure on the Israeli government by stopping bands and musicians from playing there has had success in the past few years with big name backers like Roger Waters and gigs by Thurston Moore stopped but Radiohead defied the campaign recently and the argument has become increasing polarised with Nick Cave the latest musician to hit back.

“For me, we came to Israel 20 years ago or so and did a couple of tours of Israel,” Cave said. “I felt a huge connection with Israel. People talk about loving a country, but I just felt, on some sort of level, a connection that I couldn’t really describe.”

He continued to explain that The Bad Seeds had not played in the country in the intervening two decades due to the lack of success of their 1997 record ‘The Boatman’s Call’, which “flopped” in Israel. Cave told the audience of reporters that touring that part of the world is “expensive and time-consuming”, and that “on top of that, you have to go through a kind of public humiliation from Roger Waters and co.”

“No one wants to be publicly shamed, It’s the thing we fear most, in a way – to be publicly humiliated. And I think, to my shame, I did that for maybe 20 years. Israel would come up and I would say, ‘Let’s not do it.’”

The musician explained that his change in attitude came about when Brian Eno asked him to a sign a list called Artists For Palestine three years ago. “On a very intuitive level, [I] did not want to sign it,” he said. “There was something that stunk to me about that list. Then it occurred to me that I’m not signing the list, but I’m also not playing Israel. And that just seemed to me cowardly, really.

“So after a lot of thought and consideration, I rang up my people and said, ‘We’re doing a European tour and Israel.’ Because it suddenly became very important to me to make a stand against those people who are trying to shut down musicians, to bully musicians, to censor musicians, and to silence musicians. At the end of the day, there’s maybe two reasons why I’m here. One is that I love Israel and I love Israeli people, and two is to make a principled stand against anyone who tries to censor and silence musicians. So, really, you could say in a way that the BDS [Boycott, Divestment and Sanctions movement] made me play Israel.”