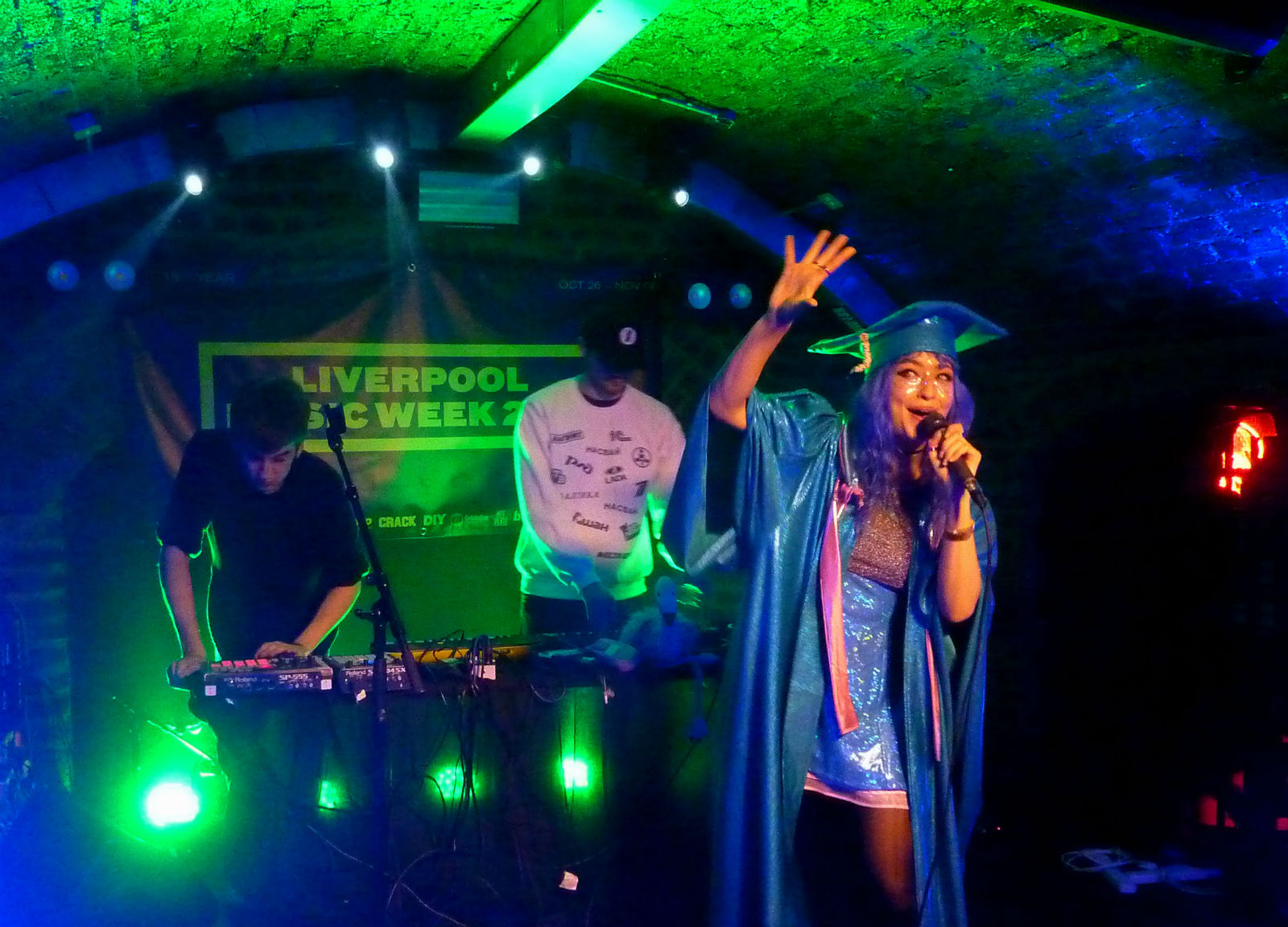 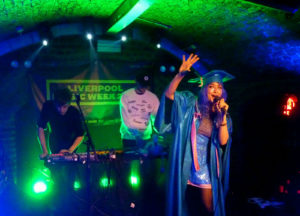 “Music Week 2017 gets off to a bouncing start as Kero Kero Mania hits Liverpool!!”

I first happened upon this delightful trio when they opened for Saint Etienne in Manchester earlier in the summer at the Royal Northern College of Music, and was so completely and utterly won over by their endearing charm and sense of mischievous abandon as they cartwheeled their way through a deliriously captivating set of gleefully bonkers tunes that I could not wait to catch them againn….  and so my wish was duly granted in a matter of months when they returned to Liverpool to kick off the opening night of the annual Music Week extravaganza.

As it turned out, as dusk fell, mist started to descend, a sense of drama was unfolding, and all manner of ghoulish freaks began littering the town as the annual Halloween weekend festivities were taking place all over the city centre. Having just witnessed, and survived, an apocalyptic samba parade – complete with suitably garish and macabre costumes – which wound its murderously cacophonous way through the nearby streets, I beat a hasty retreat to the inviting basement of EBGBs where – gasp – even more zombies were awaiting at the cloakroom entrance.

But fear not, these characters were merely staff in fancy dress: this was not that sort of gig, as one glance towards the stage at the chap performing with what appeared to be a pizza atop his head – well his stage name was PIZZAGIRL after all! – and the happy faces which made up much of the gathered throng would attest. One-man-show Pizzagirl’s cheerfully earnest and entertaining set certainly gets the heads bobbing and toes tapping. Not for him angst-ridden songs about hell and high water. Other people can sing, scream and shout about death, doom and destruction elsewhere for all I care but here tonight in this most cosy of cellar venues the emphasis and accent is strictly on spreading feel good vibes and J.O.Y. pure and simple.

Something which Kero Kero Bonito certainly encapsulate and excel at in almost every capacity from the very moment multi-talented lynchpins Gus and Jamie start pulling, pushing and prodding their various contraptions of electronic trickery and whipping up a suitable tsunami of beats, squelches, tinkles, crashes and god-only-knows-what-else to everybody’s delight …..and then on bounds the irrepressible Sarah to a rapturous reception. Cue their eponymous KKB signature tune which inspires a truly boisterous ‘call and response’ singalong with the crowd and much waving of arms in the air. This is only the first number and it already feels like an encore. ‘My Party’ ups the ante with a cheekily tantalising stop/start structure and a rhythm track that – I kid you not – is lifted wholesale from the late great George Michael’s ‘Faith’. Perhaps this was intentional….but it was inspired all the same!

Coming across like hyperactive Children’s TV presenters let loose in a recording studio  [in a parallel universe, they could well have been the house band for the breakfast channel TV-AM’s ‘Wide Awake Club’ series from the 1980s], pumping out an incredibly catchy but intricately-programmed barrage of noises informed variously by house, trance, hip-hop and early-90s rave, topped off with smart, often amusing, samples, the trio are an absolute joy to watch on stage: twin producer boffins Gus and Jamie ducking, diving and goofing about throwing shapes with their arms and the ever-enchanting Sarah – with her trademark electric blue hair – wooing the crowd with her cute cheerleading antics and costume changes, whilst brandishing various props and cuddly toys as well as occasionally lapsing into singing/rapping the words in Japanese – her second language.

Indeed, such is the sustained level of high-jinks and euphoria on show, I had a huge perma-grin on my face throughout the entire set. And no doubt, so did just about everybody else present. Imagine a junior – even Kindergarten – version of Saint Etienne running riot in a sweet factory wreaking merry havoc with day-glo paints, knocking over the furniture to a canny backdrop of old-skool computer game soundtracks – that is the impish spirit of Kero Kero Bonito through and through. 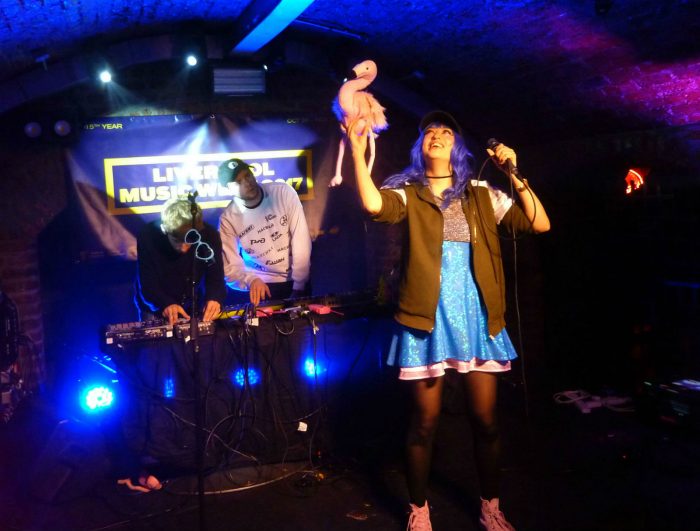 Who’d have thought that two cuddly toys – one a flamingo, and the other, a crocodile – could inspire such  mass hysteria within an audience? Said ‘special guests’ of course accompanied the respective numbers ‘Flamingo’ and ‘Pocket Crocodile’. Both of them were rapturously received like the greatest hits that they of course should already be. ‘Lipslap’ induces an even more feverish reaction – everybody now totally in thrall to Sarah’s excitable pointing and shouting. By the time the band take a ‘Break’, the temperature is fast rising and things gradually become even more adrenalised. Add to that Sarah’s nifty change into a sky blue graduation gown and matching mortar board, for the number titled – wait for it – ‘Graduation’ …..

It’s easy to see just how far the trio have come since their first gigs here in the city a couple of short years ago. Their recent Saint Etienne support obviously gained them a sizeable new – and increasingly devoted – following, but nothing prepared me for the welcome they received tonight here in Liverpool as every single person was bellowing the words of every single song as if they’d known them for years….. The band were genuinely touched : it’s Kero Kero Mania in the house!

Before the set comes to its all too rapid end, two more glorious moments breeze along in the form of ‘Forever Summer Holiday’ which has the sort of tireless bouncing melody and tempo that surely would warm the cockles of even the coldest of hearts, and the bright-eyed and bushy-tailed canter of quite possibly their single greatest number that tops them all: ‘Trampoline’….  Seldom has there been one song that – come the hook-laden chorus – is guaranteed to incite mass pogoing and furiously ecstatic leaping up and down. The kind of  aptly titled tune that makes anybody, regardless of their age, feel like a big kid once again. It really is the most sumptuous, euphoric head-rush you can imagine without the need for mind-altering substances. A delectable trip that gets you so high….you won’t ever want to come down!

Kero Kero Bonito are like a band out of time – beamed in from another era….. their irrepressible enthusiasm seemingly at complete odds with the prevailing chaos and confusion of the present day.  So utterly infectious is the energy which they radiate, it is nigh on impossible not to be swept along by the ride. Who needs to feel S.A.D.? Just sign yourself up for a dose of KKB – guaranteed to lift your spirits up and the perfect antidote to the winter blues.  If only they could sell concentrated KKB in bottles, I would be first in line in that queue. I’m hopelessly addicted and I want the world to know it!