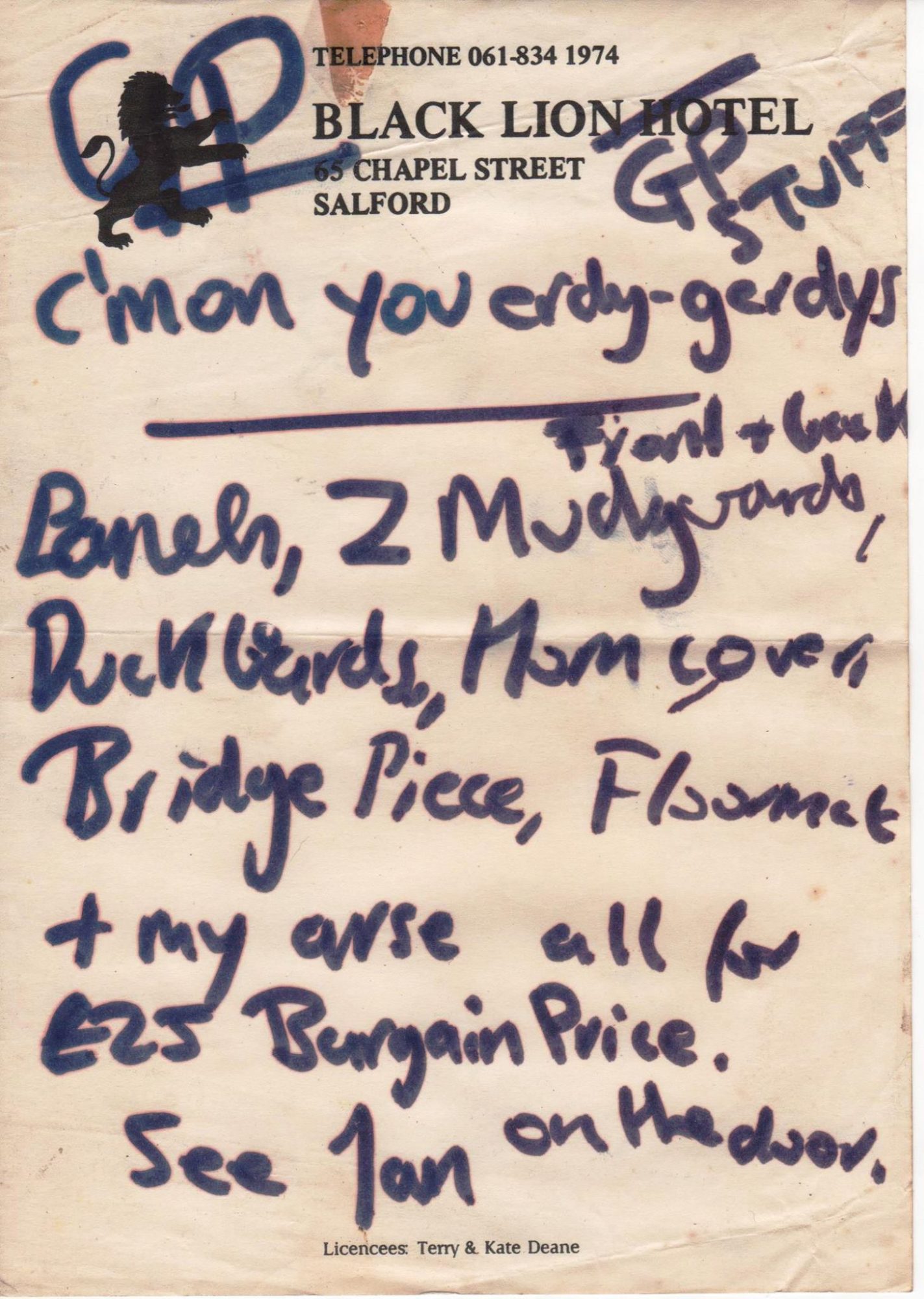 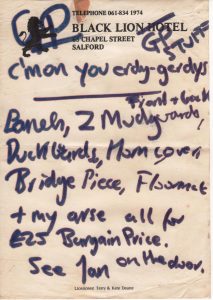 ‘I was having a root in the garage & turned up this short note thought to be lost yonks ago. I was DJ’ing a Northern Soul / Mod / Scooter scene night at the Black Lion pub in Salford back in ’82. The promoters were Mike Phoenix & Ian Brown. I was handed this note to read out, written by Ian Brown trying to flog some Lambretta GP scooter parts, a year before he formed the Stone Roses. God knows why I kept hold of this at the time, or how it survived the past 35 years!
I started dj’ing at 17, back in ’76 having amassed a record collection since I was 13, following a visit to West Gorton youth club with my pal Ralph Edghill to see his brother Dave playing tunes. This was the moment that forged my obsession with black music, I was hearing stuff not played on the radio, yet so much better, Donnie Elbert: Little Piece of Leather, Arthur Conley: Funky Street, Jean Knight: Mr Big Stuff, Toots & the Maytalls etc, etc.
In ’76 this passion drew me to Wigan Casino & a desire to return play the tunes I heard there to a wider crowd at local venues around Tameside.
Punk was happening & I couldn’t ignore the effect it also had on me via Clash & Buzzcocks, Ramones.
I started a residency at the Birch cellar bar in Ashton, where I was free to mix up all of my passions through Northern, Punk, Ska, Dub, Psych…..Etc.
In ‘82 was approached by Mike Phoenix to DJ for him & his co-promoter, a 19-year-old Ian Brown, at a Scooterist / Mod night at the Black Lion, Blackfriars, Salford.
I’d arrive with all my gear at 7pm & Ian would help me up the stairs with the load in & set up.
When we met, (I was 23) I recall him saying to me, “you’re the manager at Shoppers Paradise* in Timperley aren’t you, I go there shopping with my mam & I thought you were the coolest guy, cos you had a skinhead & wore Docs & had a manager’s badge on”
(*Shoppers Paradise, a discount supermarket like Aldi, coincidentally, where Frank Sidebottom’s Lard video was filmed)
Ian either wore a t-shirt with the current Weetabix skinheads ad campaign characters on, or more controversially the Adolph Hitler World Tour shirt, which can in my opinion be forgiven as nothing more than a juvenile attempt at being a bit naughty, but just as well there was no social media then.
One night, he was late in, I asked where he’d been, “just been to see Roman Holliday (group) at The Hacienda” how odd, even then
I recall him being very fond of the Northern stuff he was hearing for the 1st time & The Jam & 2Tone stuff, but one particular tune that I used to end the night with, he told me was a personal favourite, surprisingly, the haunting melancholy of Brenda Holloway’s: “I’ll Always Love You”.
The night ran at the Black Lion for 18 months from where it’s popularity saw it move to the Berlin Club.
I next saw Ian when I was resident DJ at The International 1, in ’86 , I asked how he was doing, he said he was in a band called The Stone Roses, & went on to say that name was inspired by the music I played at the Black Lion, “It’s about the edgy hard sound of Punk & rock feeling like Stone & the melodies of Northern Soul like a Rose”
Other tales, about my time at the International in the Roger Eagle biog , “Sit Down & listen to This” by Bill Sykes whose classic book on Manchester/Liverpool based music legend is well worth reading (details here),
I’m still playing tunes after 20 years non-stop, at The Witchwood in Ashton every Friday night, I tend to let the crowd predict the course of music these days, occasionally indulging myself with a nugget that golden era.‘