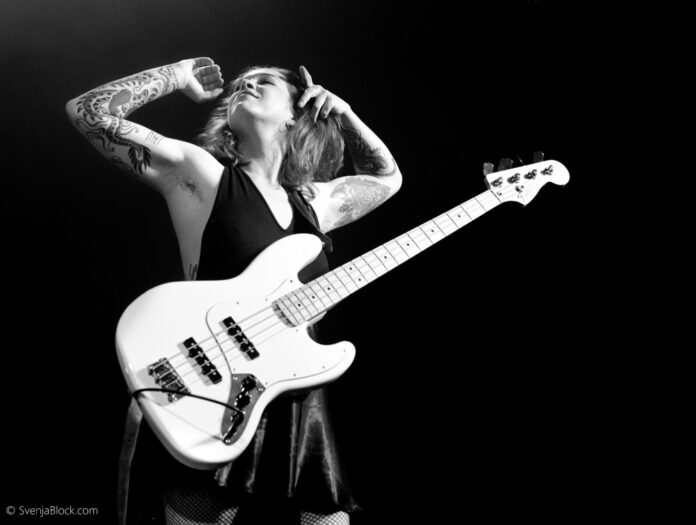 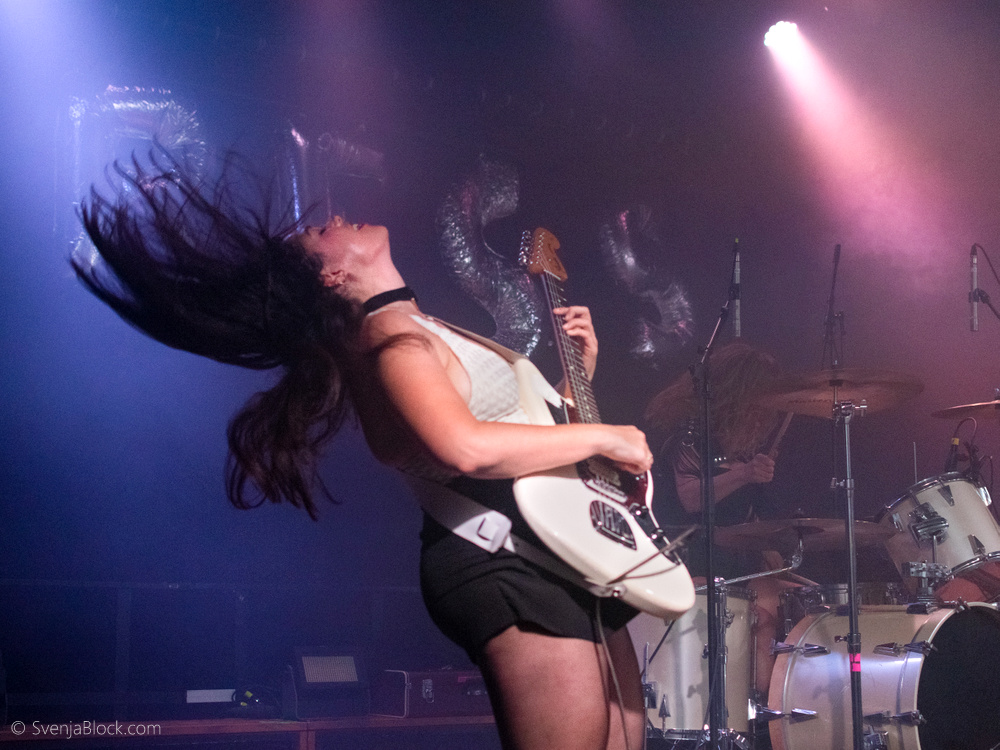 Alternative rockers 24/7 Diva Heaven released their debut album Stress back in March 2021 during another strict and rather depressing lockdown. Six months later the girl trio is finally able to put on one hell of a belated live release party together with friends at Astra Kulturhaus (Garten). Louder Than War’s Svenja Block reports back from Berlin.

When you’re not able to do something you are passionate about for a while (in my humble case 18 months of not photographing live music shows to be precise, I’m not counting the few wonderful but extremely small intimate gigs here), anticipation and excitement grow to a somewhat unhealthy and almost unbearable extent. Reasonably sized indoor shows are not yet a thing again but Astra Kulturhaus has a superb newly build large outdoor garden stage which also accommodates a bar, food stall, and plenty of space for chilling and lounging around in comfy large chairs. 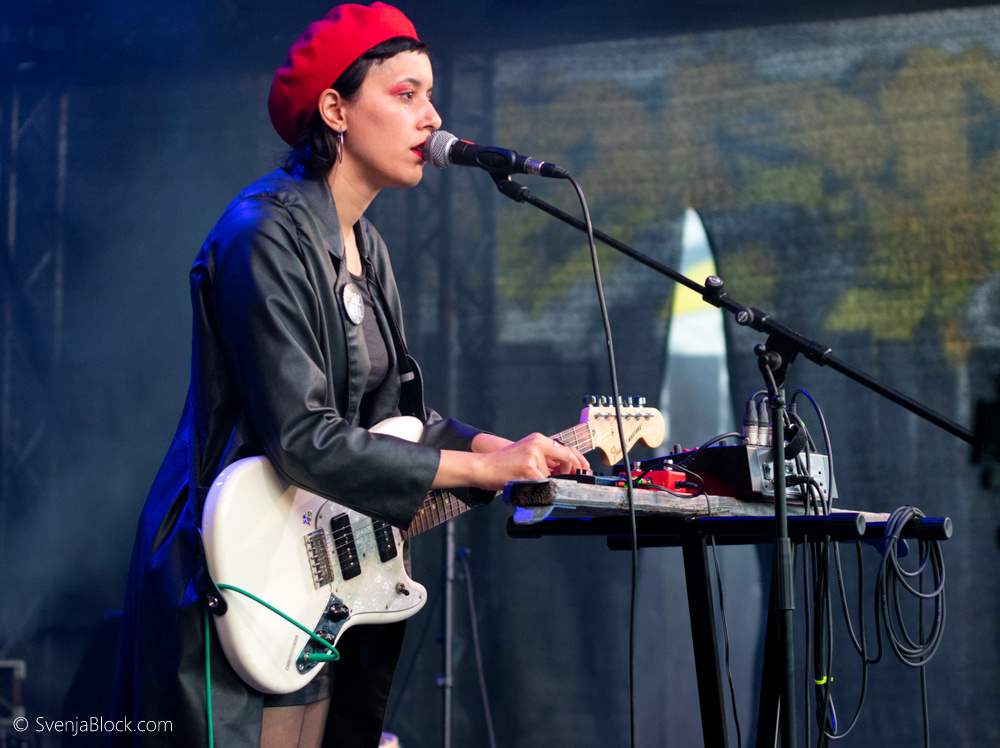 Admission and check-in were subject to the current 3G rule in Germany (geimpft – genesen – getestet or vaccinated – recovered – tested). And it looks like I narrowly missed out on a free glass of Sekt that was on offer for the first one hundred guests. Once in though, it didn’t take long for the party to start because Güner Künier, a local Neukölln based avant-garde musician entered the stage.

Singer/songwriter Künier’s working tools currently include an electric guitar and synthesizer keyboard; her minimalistic musical style has been described as an infusion of post-punk, garage, lo-fi and experimental drum beats. All songs from her EP which is set to be released on 10th September were performed – I strongly recommend checking out the new music video for the brand new single Money to get a better audio and visual feel for Güner Künier’s musical visions.

Gwen Dolyn and her amazing band Toyboys endured a long gruelling drive with nerve-racking traffic jams from Darmstadt and just about managed to arrive on location for a short soundcheck. Their live rock sound show was very well received, in between songs Gwen shared some of the personal struggles she was going through with the audience – a delicate and brave choice that deserves respect. 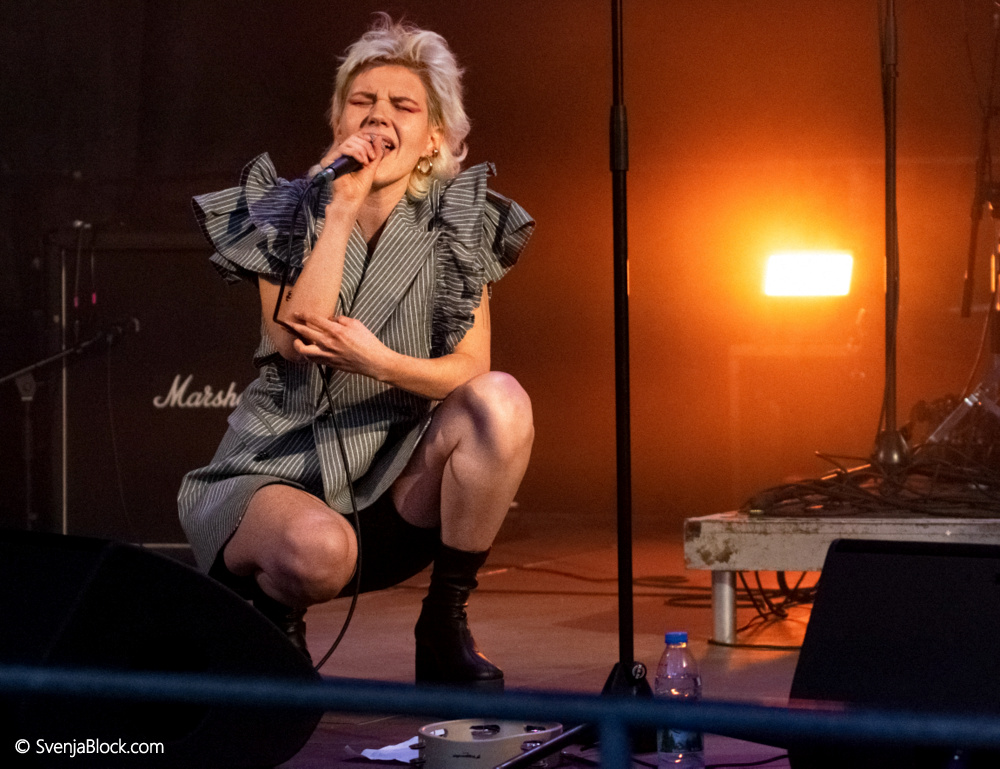 Gwen’s stage presence is charismatic, even enigmatic; her voice strong and it’s all that’s needed to leave an authentic lasting impression in an often fickle and fake world of showbiz pretentiousness and silliness, so please look out for Gwen Dolyn and her Toyboys’ first single Dr Murkes due to be out at the end of October.

As the sun set over Berlin, FEMALE TROUBLE headliners 24/7 Diva Heaven took to the stage to set off an explosive sonic mix of NOW grunge/punk/alternative rock. Whoever had been holding back and chillaxing away from the stage barriers moved forward ready to party hard. I soaked up an atmosphere that felt emotional yet uplifting, liberating, feminist, inclusive, and reminiscent of the two or three times I previously attended a gig with at least 50-70 % of womxn in the audience – Amyl & The Sniffers and L7 eat your heart out. Enter 24/7 Diva Heaven aka Katharina Ott-Alavi (main vocals/guitar), Karo Paschedag (bass guitar/backing vocals), and Mary Westphal (drums/backing vocals), who arrived at the Berlin music scene in 2018 with their self released EP Superslide. Now firmly established within the German gig and festival circuit, the trio is also one of the driving forces behind the Grrrl – Noisy collective in Berlin, a growing community of womxn musicians and creatives that form part of a feminist DIY movement that provides a safe space for live jam sessions on a regular basis. 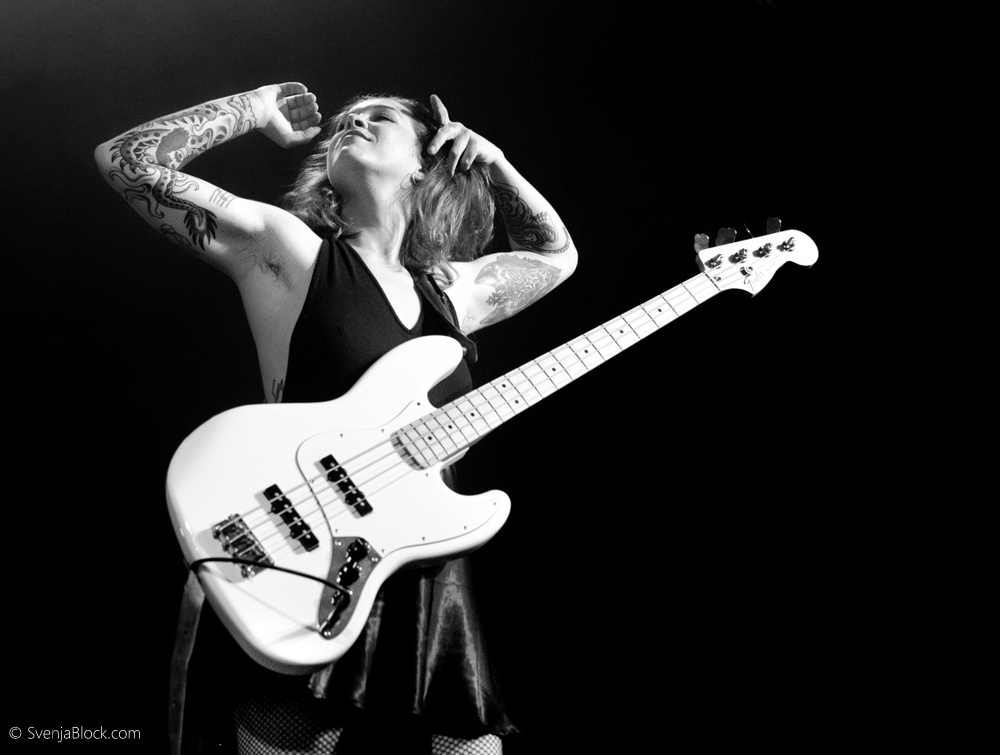 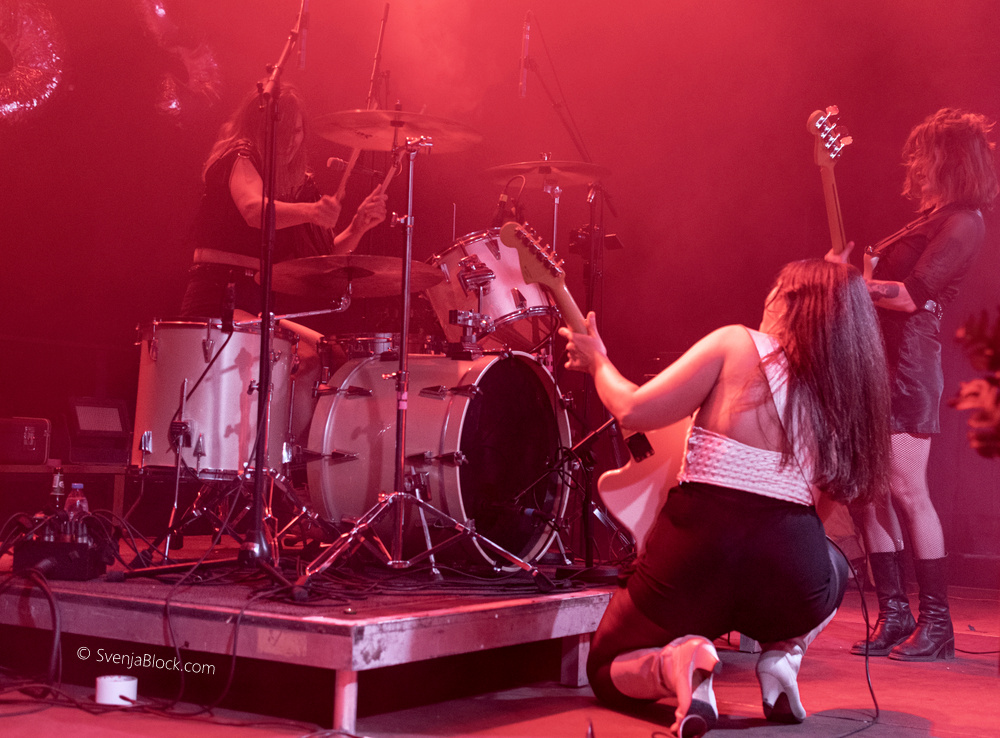 24/7 started their energetic and powerful set with Topped With Cheese from their debut album Stress, a fast punkish skate rock song. followed by the dark and more grungy and raw sounding Shamebath. It’s probably impossible not to try and draw musical and lyrical comparisons to the early 1990’s original US Riot Grrrl movement that was led by Babes In Toyland, Bikini Kill, Hole, Huggy Bear and L7 to name just a few. And that’s totally ok – this is the noughties and a new outspoken scene that has been inspired to an extent by the female leaders that influenced more than a generation of womxn in music. Sonic Youth and the Seattle music scene need to be mentioned here, too if only for some more noise-related comparisons from that era.

I digged Karo’s deep bass on Head On Collision, and the moody JT (which did remind me a bit of Swervedriver for a moment…). Potface perfectly demonstrated Kat’s strong vocal abilities and it was hugely satisfying to see these fiery girls play with such passion and confidence. Kat and Karo often turned round to face drummer Mary, the strong bond the trio shared was certainly evident. 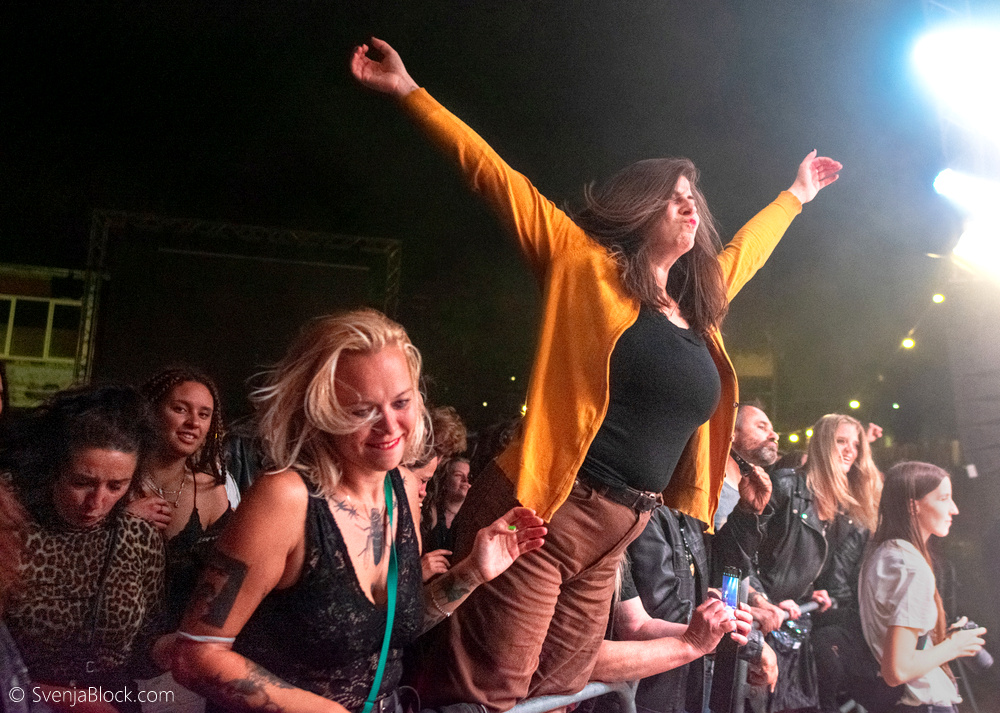 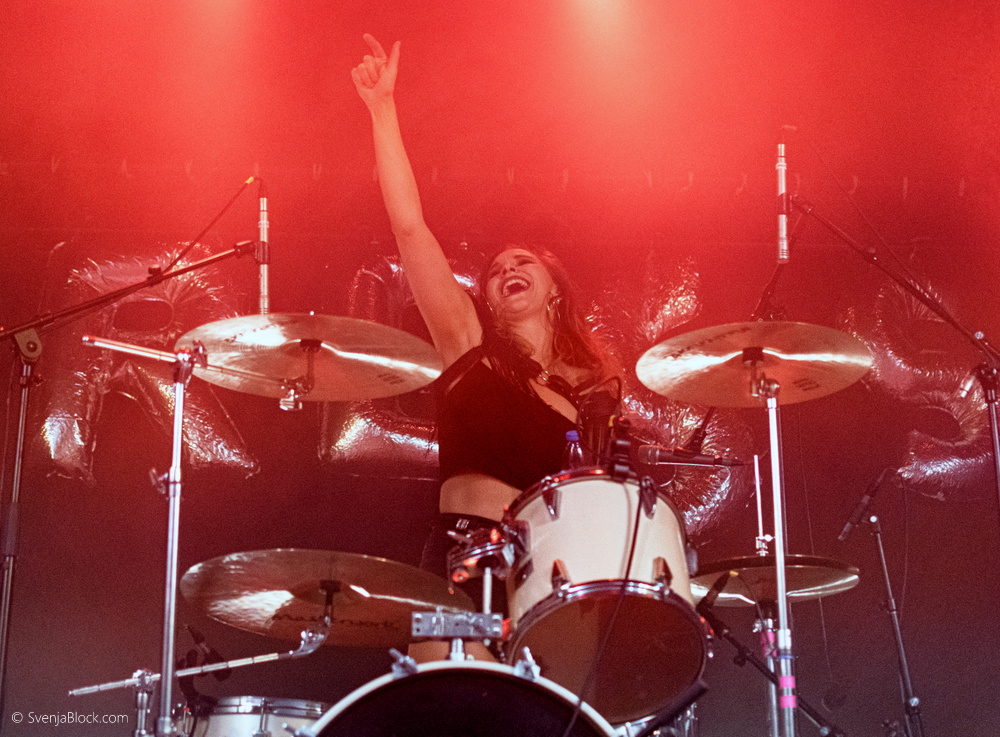 Death To was one of the fast paced personal favourites of mine: ”One, two, three – get out of my way four, five – we claim sexismcide six, seven – a movement nationwide eight, nine…” A no-nonsense simple message addressing sexism and toxic masculinity. Everyman however evoked the end of summer memories in me – a hauntingly beautiful paced down atmospheric gem of a song. Even though I didn’t recognise all of 24/7 Diva Heaven’s songs and I assume that some early material was played, the instantly recognisable Bitter Lollipop with its Weezer like catchy melody certainly drew huge cheers from the crowd followed by some serious headbanging.

The girls disappeared to the right hand side of the stage to catch their breath and put their arms around each other in solidarity before the encore – they got this! Back on stage and straight into No. 1 before playing Tourettes, a cover from Nirvana’s classic album In Utero, their final chosen song of this fantastic and successful evening. 24/7 Diva Heaven did not rock the stage, they owned it!

The Berlin (and sometimes not so underground) alternative music scene and its counterculture is well alive and kicking again and 24/7 Diva Heaven will hopefully soon be an international force to be reckoned with. 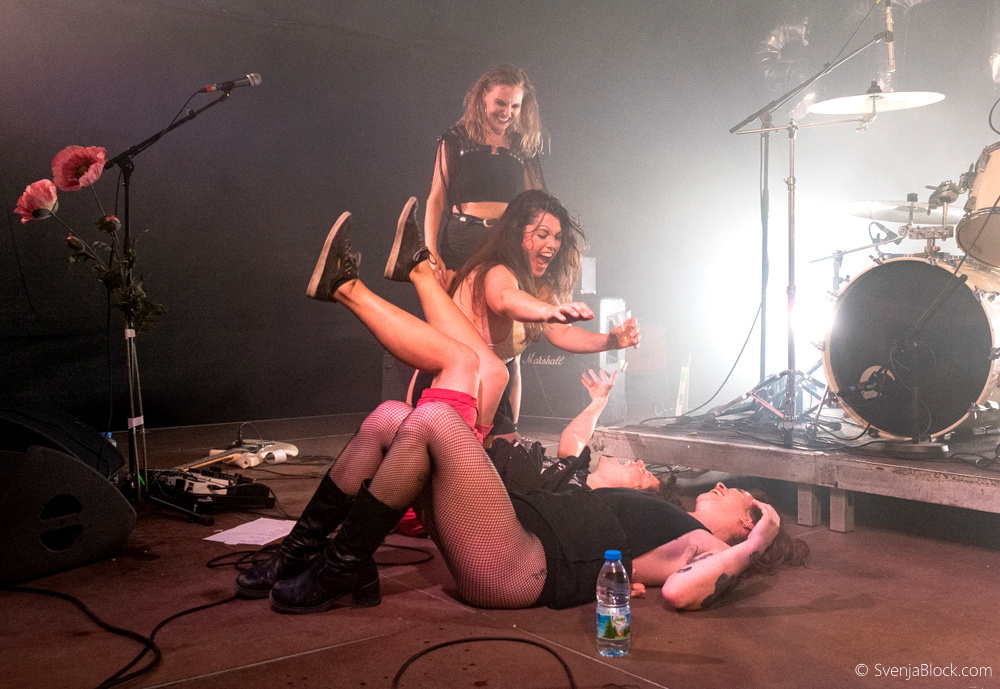 All words & photography © Svenja Block. You can find more of Svenja’s work at her Linktree , and at her Louder Than War author’s archive .