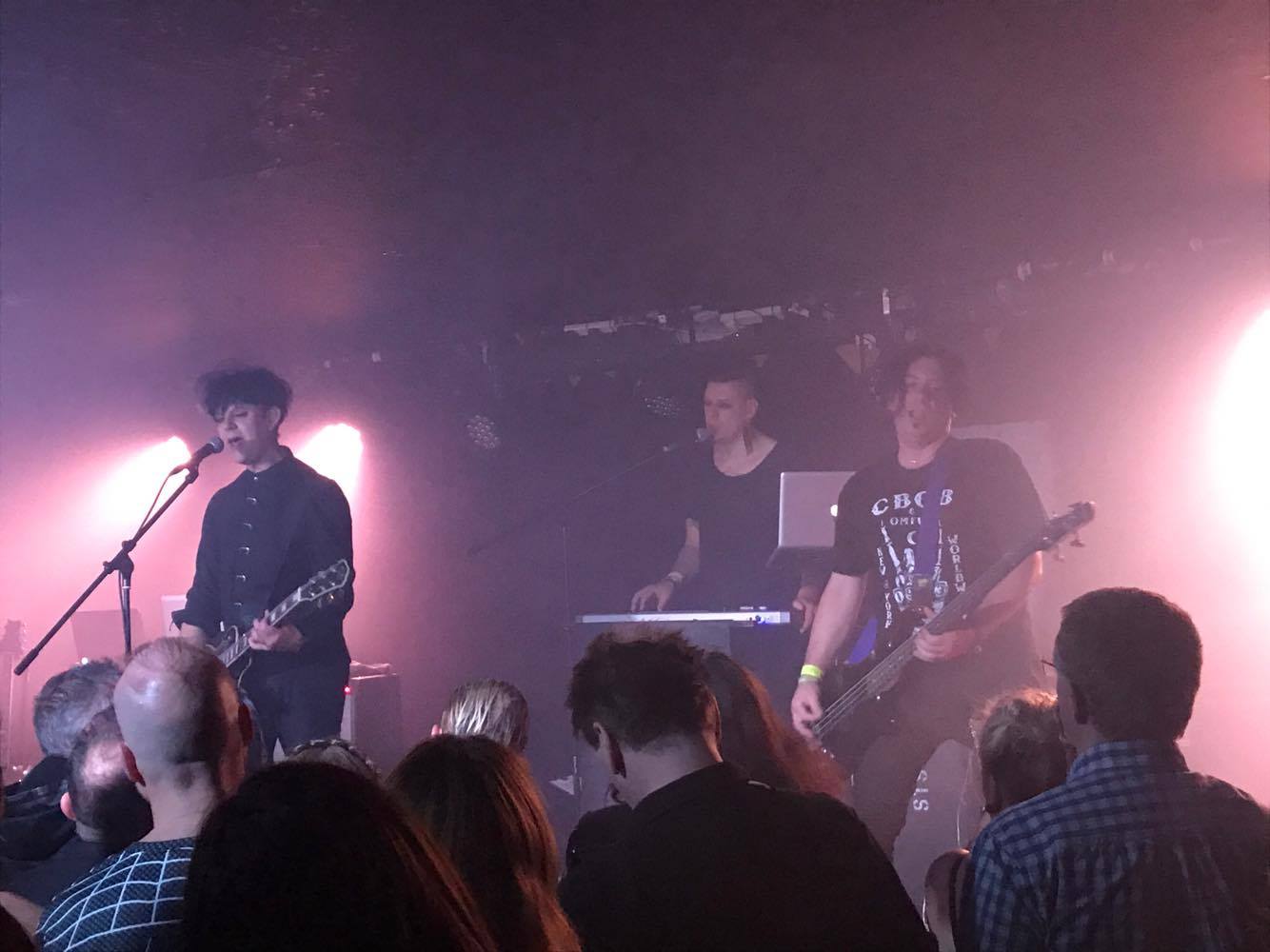 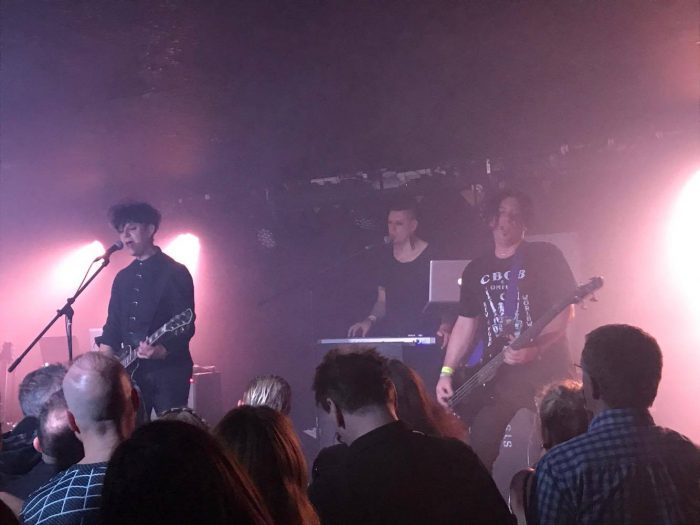 The sensation of removing yourself from the bustle of one of the busiest shopping streets in the North and stepping into a brilliant basement spilling with spiralling, shadow-immersed music, within the space of a few seconds, has a magical quality to it. It was all part of the build-up to the legendary Clan Of Xymox coming to The Ruby Lounge, Manchester, as part of their UK Tour. Louder Than War’s Emily Oldfield went along to check it out…

The atmosphere was rapidly building and the choice of three support acts I thought notable– Greenhaus, Factory Acts and Mechanical Cabaret – a substantial number which can either build in a headliner’s favour or against.

Thankfully, the former was the case, as all three acts stood out distinctly yet contributed to creating a communal web of spiralling, synth-trippy darkness which drove the audience in anticipation right into the heat of the moment, sustaining energy for the upcoming Clan Of Xymox.

Greenhaus were first on stage, an electronic 3 piece formed originally in the late 90s and standing strong with a clear ability to craft soundscapes with soaring heights, yet the simultaneous crunch of lived experience.

Amidst almost visceral tunes which built and ebbed before us, the lead singer added emphasis to the crescendos and creativity, surveying the crowd with a mellow, dark sparkle in his singing quality – a little like Nick Cave. An assemblage of electro with space rock and waves of emotion woven in which drew people away from the bar and towards the stage.

Next were Factory Acts, an electro duo dredging the audience with darkwave, blistering bass and electronica which bubbled, brimmed and burst in its articulation of modern themes – angst, anger and the importance of self-expression. This is a duo who open their music up to the listener, connecting not just the room to dimension-roaming sound but the minds of the crowd to new avenues of meaning.

Their song ‘Senseless’ speaks of social subservience, and had the audience swaying and pulsing with its weave-like Witch House, whilst their track ‘AWG’ was amplified, angry, highly evocative. The rhythms strike something deep, the electronica is ever-interesting and the vocals of SoS soar over with an almost ethereal quality, as if cracking open the last barriers to free-thought. Beautiful, bold music from a Salford-based group, signed to AnalogueTrash, who closed with ‘Animal Spirits’ as if bringing bodies and minds together on the content of one of our basic connections – sound.

Third was Mechanical Cabaret who provided an interesting contrast to the first two bands, as much more animated on stage – something which synchronised well with the eclectic, energetic nature of their oscillating post-punk outpourings. Seething synths and flurried rhythms were roused to fruition as Roi M. Cabaret swept across the stage, a smile cracking his lips as he unloosed lines of pain and passion into the audience. 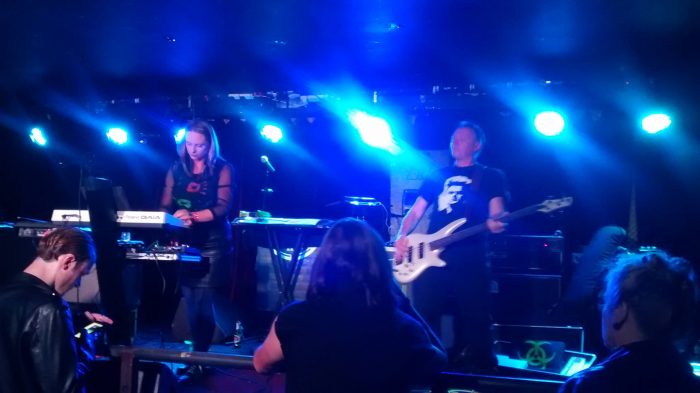 A strong stage presence combined with instrumental intensity from Stephen J. Bellamy helped give rise to a further surge of energy and an interactive quality refreshingly emphasized the point that the audience were part of the music being created. Dials were spinning, the notes careering from keys as Roi M. Cabaret reached out to the crowd and made enjoyment of music known. The themes were dark but the feeling upbeat. It was a weird contrast which on this night worked.

After all, it was a well-synchronised evening – with the transitions of the bands slick and effective, each sounding distinct and driving a real mood of excitement for Clan Of Xymox. The band originally formed in Holland in the 80s and although changed over the years, has been behind a massive amount of electronic creativity ever since – tracks which take on the multiple experiences and expressions of an era and smash them to new heights, allowing us to draw connections between past and present. Unique and yet accessible; fronted by Ronny Moorings, who is the founder and lifelong member of the band.

Their set was well-sustained and co-ordinated electronic edginess with the post-punk peals of expressive guitar, emphasized by Moorings’ deeply-dwelling and impassioned lyrics. He is a bold presence on stage but never overtly showy, maintaining an aura of mystery yet still expressing the self, struggle and emotion in the substance of what he sings. This is a skill.

It was a gig very much celebratory of their latest 2017 album ‘Days Of Black’ – cleverly reflecting on the difficulties and darkness within modernity, whilst also moulded by awareness of the past. 80s immersion is there in areas of electronic-led upbeat, yet interwoven with melodic mysticism, rousing guitar and vocals which muse on melancholy, modernity and more. Driven by lived experience without seeming dated, this kept the audience allured until the end.

I find that music which covers melancholy content can often lead to a subdued mood, but I must say that Clan Of Xymox were deeply enjoyable. Layers of electronic craft which is very much alive and kicking through tracks like ‘Your Kiss’, with themes both of distance and passion, before driving home to close with flashes of industrial in there and the fan-favourite of ‘Obsession’. The mood was blistering in its brilliant intensity and the band so open and approachable afterwards: a quality which was welcome to see.

An evening of rousing themes of love, loss and the living condition, pulling on experiences of past and constructing a present which was excellently co-ordinated and carefully soundscaped. Plenty of satisfying synths. And plenty to think about.

Photography –  Photo 1: with thanks to Susan Ní Shéaghdha, Photo 2: of Factory Acts, reviewer’s own.