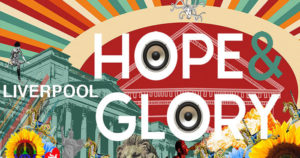 The disastrous Hope and Glory Festival has done the dirty deed with the company behind a “chaotic” music festival that was pulled on the second day going into liquidation while owing almost £890,000 to creditors.

The festival in Liverpool that is now being investigated by higher authorities was called off on 6 August amid reports of overcrowding, long delays for artists and acts axed at the last minute.

Many of band remain unpaid with only the bigger acts getting their money with smaller acts being past around different parties and remaining unpaid. The organisers of the festival and the Hope and Glory company have both become bywords in how not to organise a festival and their names are known throughout the music industry with everyone knowing not to work with any of them again.

Insolvency firm Butcher Woods said 32 creditors were owed £888,984, including Liverpool City Council.
Company director Iain Kerr has been contacted for comment.
The council said it was “seeking recovery of costs associated with the clean-up operation” for the festival at Liverpool’s St Georges Quarter.
Ticket selling websites Eventbrite and Skiddle said they had given full refunds to people with tickets for the cancelled day and a 50% refund for weekend ticket holders.
Eventbrite had already paid festival organisers for the funds collected from ticket sales and was now “aggressively pursuing Hope & Glory” to get the money back, a spokesman said.
Director of Skiddle, Ben Sebborn, said despite attempts “to co-operate with the festival owners it became clear that our customers would remain out of pocket unless we intervened”.
He said it was now “very unlikely that Skiddle will receive reimbursement from the festival organisers”.
The council is holding an independent review “into the operational detail” of the festival, which it said “will be complete shortly”.
“Any lessons learned will be implemented for future events run by outside organisations,” a council spokesman said.
Police had to help open up another entrance on the first day of the festival, which was attended by 12,500 people, amid apparently long waits and poor access to toilets and food and drink facilities.
In a previous statement organisers said the festival was cancelled over safety concerns and said they “accepted ultimate responsibility” and “profusely apologised” to the public.
Some acts, including Charlotte Church, were axed. Headliners James did perform but lead singer Tim Booth apologised to fans for the “chaos”.