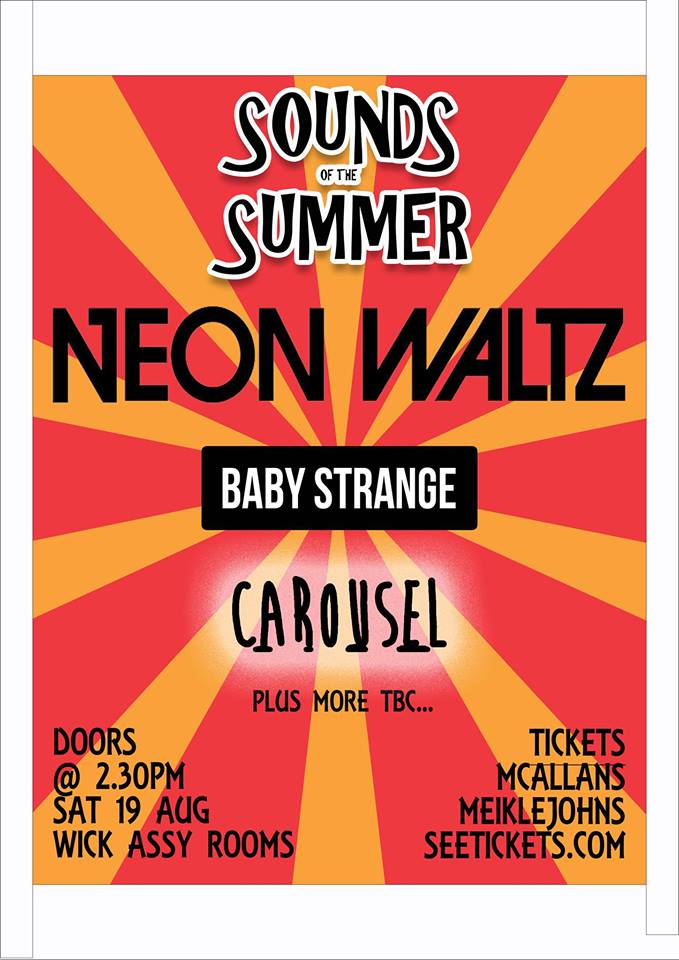 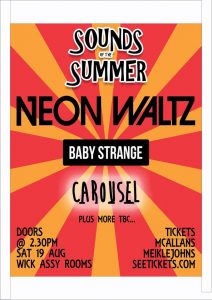 Sounds of the Summer

Louder Than War’s Roxy Gillespie made the long trip north to the beautiful Scottish town of Wick to review a new small festival, Sounds of the Summer. Here is what she found:

Wick is the most northern town in Scotland. It is a quiet place, with views that stretch to the far horizon across the North Sea. Still the sort of place where shops are mostly closed on a Sunday, it seems an unlikely venue for a one day festival boasting some of the most exciting acts Scotland has to offer. Sounds of the Summer achieved that with style.

The Assembly Rooms is a dream of a venue. There is enough space to hold a sizable crowd, a big stage and a fair sized bar area. Add to that sound engineering and acoustics many city festivals would envy. Quality infrastructure in place, all that was needed was the bands.

And what bands they were. Even openers Deep Heat, a fairly new rock band with only two of their own tracks and two covers to bring to the stage, gave a good performance.

The next band High Wire were an intriguing mix of AC/DC style rock and some fantastic vocals which coupled with some excellent guitars gave songs like Devil Dog and Heavy Breathing a real edge. Impressive full-blown rock.

I’m not sure if it’s something in the Scottish water, but they certainly produce some amazing singers. Forgetting The Future are a case in point. The Thurso band bring some really individual indie rock to the stage and, again, the vocals blow you away. There is a Nirvana edge to some of their songs, but with plenty of rhythm changes to keep things interesting. Vocalist Robbie Mcnichol’s tremulous vocals tip their hat to Brian Molko but have their own distinct quality. Refused had some nice introspective chords to start leading to some beautiful rhythmic changes and fine vocals. Latch was an exciting stand-out track. Definitely ones to watch.

Carousel from Dundee were the first of the more established acts to hit the stage. Melodic indie was the order of the day, and some fine acoustic tracks thrown in for good measure. Even their manager got to guest on lead vocals. It was his birthday, and he was brought on to sing on a track he had written called Changes, which went really well. The singles Friend and You Told Me also stood out in a good set.

Tijuana Bibles have a heavy vibe and produce some excellent rock tracks. This Glasgow band have an excellent dark energy. Pariah was outstanding and full of atmosphere. Sun Chaser was simpler in feel and not as heavy, with an ear-worm chorus. The brilliant and moody Crucifixion was another highlight. The set was far better than the audience reaction would have suggested, but that was in no way due to the quality of the songs, which were all top quality.

Baby Strange played to an almost full house. Their sometimes brutal punk is always a winner. With so many top tracks to choose from, it is hard to pin-point the best of the bunch, but VVV and Friend really hit between the eyes and superb recent tracks like Play Me show this band have never hit a wrong beat throughout their history. California Sun shows a quieter side to the band, giving their repertoire depth and quality. A stunning version of Pure Evil by Johnny Madden and the McCann boys really brought the sometimes-too-polite crowd to life. Another fantastic set from one of the best bands in the country.

Many of the crowd had come to see the headliners Neon Waltz who were celebrating the release of their debut album Strange Hymns, a stunning body of work by anyone’s standards. The room was full and expectant as the band took the stage. As Jordan Shearer said, addressing the crowd at the start of the set “We’re from… here”. Local boys extraordinaire, Neon Waltz hail from John O’Groats making Wick their closest town.

The crowd were long-term fans and this was a triumphant homecoming. From a beautiful rendition of Sundial the set went from strength to strength pulling the crowd from one beautiful melody to the next with lashings of striking indie beats to complete the process. The psychedelic shoe gaze quality to some of the tracks is achingly lovely; Sombre Fayre with the lyrics “I can’t go back” being a case in point. More up-beat tracks like Bring Me to Light and Dreamers had the crowd going wild. The music was gorgeous and the crowd lapped it up. Pulled back on stage for an encore by the sheer weight of crowd expectation, the band finished the night with a triumphal rendition of You and Me which had the crowd going wild.

From first to last Sounds of the Summer had everything going for it, except perhaps geographical location. Not that there is anything wrong with beautiful Wick, far from it, but it is harder to access than many sites. Apart from that, the festival was an amazing collection of some of the best bands on offer anywhere. Many of them deserve far more recognition than they currently get.

There was not one band, even those just starting out, that I would discourage you from going to see. All very well for the Scottish – the rest of us might need to wait a while for some of the smaller bands to make it across the border and thrill the rest of the world. However, Tijuana Bibles and Baby Strange are playing at Reading Festival. Both Baby Strange and Neon Waltz tour the UK this autumn, while Tijuana Bibles stray further afield, playing four Spanish dates in September. Make sure you catch Scotland’s finest in a city near you.

Find more about some of the bands on Facebook: Neon Waltz, Baby Strange, Tijuana Bibles, Carousel, Forgetting The Future and High Wire.