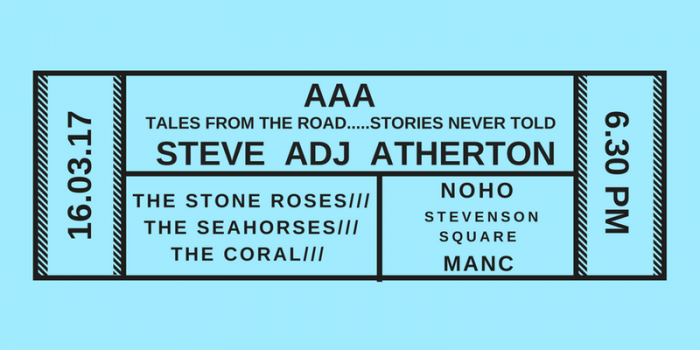 Steve ‘ADJ’ Atherton, also known as ‘The Adj’ and for keeping the show on the road for some of the UK’s biggest guitar bands, learning his trade looking after the Stone Roses on the road from the mid-80’s onwards. Kicking his career off staging the their now legendary illegal gig/parties – ‘The Flower Shows’, he was closer to his band than the average tour manager and helped make the Roses road-show a memorable event, everytime. 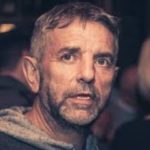 Going on to look after the tours of bands like The Seahorses and The Coral Steve Adge has gone on to become one of the UK’s most renowned tour managers of British guitar bands of the last 30 years, and what a career. So it should be no surprise to learn he’s wrote his bio/career up for a new book ‘Access All Areas – Tales From The Road..Stories Never Told’. Making for what sounds like a rather fascinating and entertaining read, a real eye opener to. Offering a unique behind the scenes look at what its really like on the road with a big group on a big tour – which is soon to be released.

Here I get to put a few questions to Steve as he gets ready for his live conversation on the book this coming Thursday at Noho, the Northern Quarter, Manchester. (details below)

Hello Steve and thanks for talking to LTW…first off congrats on the release of your new book ‘AAA with Steve Adj Atherton – Tales from the road, stories never told’. If you will could you start off giving us a brief run down of your whole career. One of your first moves was putting the Stone Roses all night gigs on (The Flower Show) in 86, but how did you actually became a tour manger?

Steve Atherton – Yeah, thats right Carl.  Steven William Atherton, Born 12.05.57 Gorton , Manchester. I left school at 15, became an apprentice Plumber for Manchester City Council. It was on the job training where apart from City and Guilds, my best qualifications were thinking on my feet, A+ in Duckin’ and Divin’, and a Gold Medal at hitting the ground runnin’.  Then night clubbin’ from the tender age of 16, which in my mind completed my education, gaining a 1st Class Honoury Degree in Mancunian Guile.

My early involvement in music comprised of bit parts in one or two bands, but I soon learnt that my skills would be better focused on the other side of the stage.  My music taste started with Northern Soul, then onto Punk, Bowie, Lou Reed, but most of all The Clash.

After ending my plumbing career of 12 years, I landed the position of studio manager at Spirit Studios on Tariff Street.  Where I had rehearsed with the band I was in.  This was the place where The Stone Roses choose to rehearse.

From the first moment I heard sounds seeping from their rehearsal room, I was smitten.  The sound was so raw, so young, but oh so fucking good.  In my head I knew thats where my future lay.  I had one other qualification that was priceless, my driving licence.

After the first Warehouse party I then began to drive the band to other gigs and grew into the job of tour manager.

So why now. Was the idea for a book something you’ve always had, how about the Stone Roses reunion – did it inspire you in any way to actually put it together?

No not really, I always had the book in my head.  I worked on the reunion tour from rehearsals to the end of the first set of dates.  I’m a luddite and only discovered that I could write my thoughts down during a long spell in hospital, armed with an iPhone, the notes app, and a large amount of morphine.  The book will be released on the 12th May 2017, its my 60th birthday, which amounts to over half of my life on the road.


What were those early days like finding your feet as tour manager with the Roses?

As with most bands starting out, the gigs are few and far between. I helped set up the school of ‘School of Sound Recording’ at Spirit Studios, drove singing telegrams, sold bootleg shirts across our safe european home, all of which helped pay the bills and start a family. In the early days of the band, the whole thing was a gang mentality, you did not work for THE STONE ROSES, you worked with them. That is a massive part of their makeup, a rare thing in my mind but one that bears fruit. 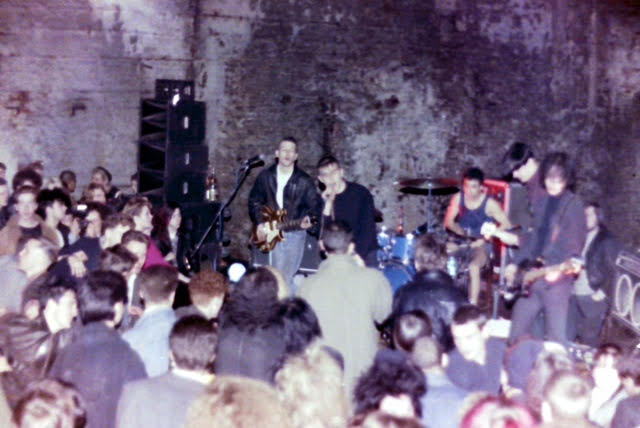 After years with the Roses you went on to work with John Squire with The Seahorses. Wasn’t it you who actually first heard Chris Helm busking in the lanes in York and put John on to him for an audition?

I can not claim to have discovered Chris Helm.  John Squires guitar tech, then and to this day, is Martin Herbert. He hails from York, as did Chris and Stuart Fletcher who played bass in The Seahorses. I first saw Chris Helm at a gig in Manchester arranged by Simon Moran, who I co-managed the band with.

How did you end up as tour manager of The Coral, I imagine they’d be easy to work with as tour manager, they seem a laid back bunch and good laugh to be around. Have you ever imagined yourself  looking after tours for bands like Aerosmith, where everyone part of the tour has to go for group therapy, every day. Or a band like Guns & Roses whose singer was always throwing tantrums upsetting the road crew?

I am not your normal type of hired gun when it comes to working with bands.  I have to love who I work with, The Coral were a no brainer. Simon Moran called me, asked me to see the band live and to manage all the day stuff that all bands require. I’m proud to say I found them the studio space to create their magic.  The Coral are the type of people you would work 20 hours a day for. I could never work for a band that creates trouble for the crew, its a team thing.  For the crew make the live gigs happen, they create the buzz whilst your on the road that gives you the life stylee we love. I could not keep my mouth shut if the act were clowns. I would not last a week. Life’s to short for that.

On one hand I’d imagine the book as probably a real sex,drugs & rock’n’roll story, with plenty of humour. But also one which maybe for the first time for many music fans opens up the world of touring and the logistics which goes into a big tour. Because as a tour manager I assume you also have to keep a clear head and know exactly whats happening around you, all the time, especially when everyone is relying on you. Can it be stressful being a tour manager Steve?

It’s a natural thing for me looking after people, and not stress full. I had to test out all substances for the purpose of quality, of quality control.

Now that’s commitment…but how did you actually go about remembering 30 years touring with 3 big groups though, getting it all down in order time-wise. Did you maybe keep a diary or a journal while on the road?

Carl, I can remember everything that happened like it was yesterday, because it was so much fun. I can still see Harry Houdinis sword being pointed at me, all those years ago in LA.  The full story is in the book, but I might give some of it away on Thursday at Noho.  I might even bring the sword.

How about something from the AAA. As a taster of the book could you maybe share one of its stand out moments with us ?

OTHERS WILL TALK ABOUT THE TUNES THEY HEARD AROUND THE TIME OF THE FIRST STONE ROSES ALBUM AND WHAT THE SONGS MEANT TO THEM AND HOW THEY RELATE TO THEIR LIVES.

THE HASH THE WEED THE NEED FOR SPEED

SOME WILL TALK OF THE LANDMARK SHOWS

BUT ITS THE LITTLE THINGS THAT REMAIN PREDOMINANT WITH ME

A MUSHROOM BREW FOR A WIDE EYED CREW

THE SONG FOR THE QUEEN AT GLASGOW GREEN

OF WHERE IVE BEEN AND ALL IVE SEEN

OF WEARING FLARES AND HURLING CHAIRS

AND BOUNCING CROWDS AT PRESTON CLOUDS

PLEASE COME WITH ME THE TRIP IS FREE

LET ME RELAY TO YOU THE RISE OF THE STONE ROSES

YOU CANT TELL ME ANYTHING

FOR I WAS A GARAGE FLOWER

Look out for  – ‘Access All Areas with Steve AdJ Atherton..Tales from the Road-Stories never told’

…also catch Steve for a live conversation covering his new book at Noho, Stevenson Sq in Manchester’s Northern Quarter this Thursday, 16 March/2017 at 6.30pm – as he recounts his life as the long time serving Stone Roses TM, as well as to The Seahorses and The Coral.