Home Blogs 21st Century Renaissance Man – interview and catch up with Youth from... 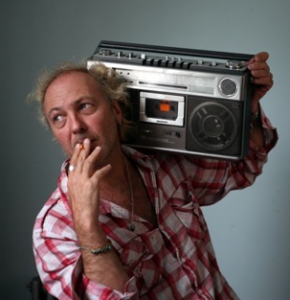 ‘Killing Joke have always been more about lifestyle than career!’

LTW has a catch-up with Martin ‘Youth’ Glover

The main title of this piece might at first seem like a clumsy play on the title of King Crimson’s 1969 progressive rock song of almost the same name, but it really isn’t. Not only is Martin ‘Youth’ Glover an admirer of King Crimson’s guitarist Robert Fripp’s inventive guitar sorcery, both have resolutely refused to be constrained to one creative avenue, boldly exploring genres and indeed aesthetics that most consider verboten.

And just as Fripp has diversified into such disparate areas such as electronic soundscapes, nu-jazz, Youth has also effortlessly negotiated genres such as dub, techno and even good old ‘pop’. Similarly, both also have diverse and fecund production CV’s. Fripp has produced and written with David Bowie, Brian Eno and David Sylvian, and Youth has produced and composed with Paul McCartney (as The Firemen) and produced: the Verve, Kate Bush, David Gilmour (Pink Floyd) and more recently Jah Wobble and Black Grape.

Youth’s stock in-trade and first love is of course bass playing and over the last four decades he has on-and-off been supplying the cavernous low-end rumble for the highly influential and innovative Killing Joke. He kindly agreed to answer a few questions regarding his recent, present and indeed future creative endeavours for Louder Than War

The Killing Joke ‘Laugh At Your Peril’ 40th anniversary tour started on the 1st September 2018 and ended on November 17th. How did you feel at ‘show one’ in Seattle?

I was fine but the Tour Manager but not-so-much! They had left me in the coffee shop! ‘Not pleased’ would be an understatement…

These were some of the most intense and powerful shows that Killing Joke have ever played. This is remarkable when one considers considering how many shows has played over the last four decades. How does it feel being at the centre of the firestorm?
Yes, the chemistry was good, and intense. It could have gone the other way but the response from the fans was so immense it put everyone in a good mood; including Jaz who traditionally doesn’t like touring the States!

Many Gatherers say that Killing Joke shows are unique, in the sense that they are ritualistic and celebratory in nature. Do you feel that this something that is unique to KJ?

I’m sure many other bands have a similarly ritualistic approach to performance but it’s unique with Killing Joke in the way we do it, and with our four very different personalities anything can happen!

Some of the countries and locations that the tour touched were certainly off the beaten track such as Peru, Argentina, Mexico and Chile. You are well travelled anyway but were any of them new to you, and were the Gatherers in South America or Slovakia different in how they view KJ’s music?

South America was incredible – it was something that Jaz and I really pushed for once we’d agreed to the tour. Once we’d got there we both immediately started to love it so much it became less like ‘touring’ and more like a new lifestyle! But then Killing Joke have always been more about ‘lifestyle’ than ‘career’! Jaz loved it so much he’s been living in Peru semi-permanently for the last six months .

How did you feel at the final show at London’s Roundhouse in November physically and spiritually? Are KJ like most bands when an extensive tour has finished and there’s nothing to do at ‘show time’?

Initially I was exhausted but also exhilarated and ecstatic. Long tours are great..until you STOP! Funnily enough days-off whilst touring can be killer too and then of course when you get home there’s that horrible feeling of ‘WTF!’ I also get that adrenaline charge at 8pm when you would normally be getting ‘vibed-up’ for the show!

You are also a painter and illustrator and I saw on your Facebook feed that you used some of your pre-show time on the world tour to paint. Do your surroundings impact what you create?

Yes, environment does indeed effect, affect and inform the work: people, places, faces..it’s all in there Mark-making is all about conversations with the place, the time and the canvas. Generally, the more you listen, the better the work.

Speaking of studios, would I be right in saying that your recording and production work is split between your studio in London and El Mirador, located in the rolling hills of Andalusia? Once you decide to record/produce someone, what are the relative merits of using each one with that artist in mind?

I’m very lucky to have space mountain in Spain as a studio resource. So many studios I’ve been involved with have come-and-gone over the years. When I started building El Mirador twenty years ago people were saying ‘Don’t do it!’  All the studios were closing I thought ‘I still need a studio !’ I also spend a lot of time travelling and recording abroad so in the last two years for example, I’ve been to Jamaica a lot and was honoured to be part of setting up Trojan Jamaica studios. Just recently I travelled to Kampala and did some recording in a small studio there.

Speaking of El Mirador on ‘magic mountain’, you regularly post images of the glorious sun rises there, which I believe are taken on your iphone? Have you ever considered showing them in a more formalised way – at an exhibition or a gallery for example?

I love photography and I love the convenience of the iPhone as a camera. I could also do with a decent Leica though. There’s a book of my photographs from the last tour upcoming. I would definitely love to do an exhibition and maybe make some prints available.

Speaking of the omnipresent iPhone you once intimated that it’s invention has had the same effect on popular culture as the guitar. An intriguing and some would say a provocative statement. Could you elaborate?

I’ve also said the iPhone was more important than the internet itself as the way we use the internet now has happened because of the iPhone. It’s still early days but many producers and artist today create only using the iPhone exclusively’ That being said,  like all ‘ tech’ you have to be in charge and exploit it for what you want it to do – otherwise it will exploit you and turn you into a vegetable !

Bringing things up-to-speed I noticed on your Facebook feed that you have been recording an album with the legendary documentarian and A&R person (for Bob Marley via Island Records) Vivien Goldman. Have you also been writing with her as well as producing?

I’ve been recording many reggae legends in JA for Trojan Jamaica which is Zak and Sssh ‘s label, from Big Youth, Mykal Rose to Ernest Ranglin. These were easily some of the best sessions I’ve ever been involved with or lucky enough to produce. Viv was out there interviewing everyone for a film to go with it. We are mixing Vivian’s  album up now which I co-wrote with and produced. This is actually her debut album which I think has been long-delayed. Vivian is one of most realised artists I e ever worked with. I’ve known her since I was seventeen when she used to take me to shebeens and after hours dub and blues clubs. She’s been educating me ever since and she’s certainly one of the smartest cats I’ve ever met. She once took me and John Lydon over to the Mayfair hotel to meet Bob Marley and the Wailers!

We seem to have come full circle as KJ have recently revealed that you are to play some U.S. shows starting in May this year and then in the UK in August and then Ireland and possibly more shows in Europe. Despite the

Yes, the band are primed and ready for the USA again and we may possibly be doing some recording in August. There’s no-one out there like us!

Speaking of Europe any thoughts on the overarching subject of the day: the Brexit debacle?

Brexit won’t happen but if it does it will be a disaster because it’s essentially a fascist coup – resist! As much as I am against Big State government I dream of the end of nations. I am an internationalist if you like but that doesn’t mean I’m not patriotic – but our future is in Europe.

Many Gatherers were overjoyed to see the announcement of these like KJ dates and would never forgive me if I didn’t ask you if there are any plans for another KJ album?

We are planning to record in August – but whether it actually happens or not is another thing!

Rahman the Writer for LTW