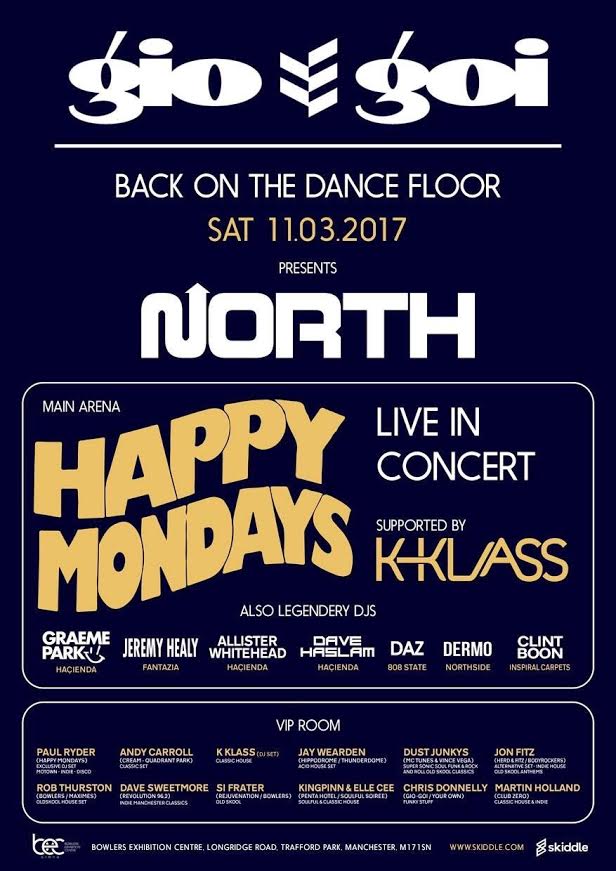 As Happy Mondays look ahead to headlining next weeks NORTH event at Manchester’s Bowlers Exhibition Centre, kicking off their first gig this year Shaun Ryder announces Black Grapes new album summer release as he prepairs for the Mondays live return to their home city.

Hi Shaun, hows things going for you so far this year?

Shaun Ryder – Going great yeah, though right now I sound a bit funny when I talk because I’ve just had all my teeth done again, I’ve got a whole new set of screw in ‘chopper’s’ that I’ve just had fitted. So I’ve got a face like an elephant and I’m also lisping when I speak because I’m just getting used to them. Its like having an operation, they get all the surgical gowns on, cut your gums, cut the top of your mouth, go up your nose and after it your face just swells up. Right now I’ve got huge cheeks and my speech hasn’t adapted to it all yet. But by the time the North show comes around I’ll be all good to go.

Yes, I think it is yeah and its always great to get back on stage with the band, its also been a Black Grape year for me as well too. But North is our first show for 2017 and towards the end of the year the Mondays will be back on tour.

Have you ever played there before?

No never played Bowlers before or even been there to be honest, its new one for us.

With a quality line up of DJ’s playing on the night too its kinda looking like one of those acid house nights the city was famed for. Which of the DJ’s do you remember fondly from the Madchester era?

Well actually, the only Manchester DJ I ever really knew was Mike Pickering (M People). Because Mike was part of Factory and he’d introduce our records but I never got to know the other DJ’s at all. Its funny really because DJ’s like Graeme Park and Jon Dasilva, I never even knew what what they looked like never mind knew them. It was only in 2010 that I actually met Graeme. And Jon Dasilva, I never even spoke to him during all that time during the Manchester music scene was going on. It wasn’t til I started DJ’n myself that I would bump into Jon and have a chat. 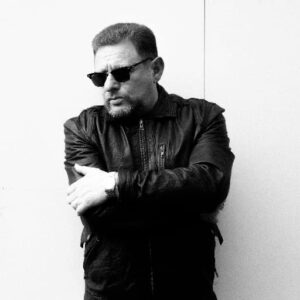 I think I’ve been to all the tours the Mondays have done since the reunion and think the band sound as good as they ever have, whats your thoughts?

Yeah, me too…It was great back in the day because we were all young lads and it really was sex,drugs & rock’n’roll, we really did live that life style. But to me at that time the stage and playing live was kinda last. It was about putting the tunes together and writing new tunes in rehearsals, with the live stuff just being part of the job really.

But now, as we’re all grown men and don’t have all the extra hassles we did back then at some of our shows . Which as young lads in a band there were all kinds of kick-offs going on, but now were older its all about the music, especially live. You know, I think we sound better than ever, we’re all compos mentis and as far as the shows go musically its as good as its ever sounded.

The Mondays have great back catalogue so to be fair the band can knock out a number of different set lists full of stand out songs. The gigs for the Bummed tour a few yrs back now was amazing…playing tunes such as Clap Ya Hands and Mad Cyril…what have you planned for Bowlers

Those tunes you mention like Clap Ya Hands and Mad Cyril, we’re playing again and will be performing them at Bowlers. A lot of the time when it comes to set lists I just leave it to the band and Dan our M.D. Say if there is something on there which I don’t particularly want to do or a tune which I feel would be better to play I’ll mention it, but for Bowlers we’ll be playing a number of tunes from Bummed and other albums.

Its an event which sees the band work with people who were about when the band first started playing, like Tracey Donnelly who worked with Tony Wilson when the mondays signed to Factory.

Yeah, I’ve known Tracey since I was 20yrs old, I remember her back in the days during various Hacienda nights and of course from Factory Records. She was one of the Mondays earliest supporters and was there from day one so yeah, it’s great to be able to catch up with people like Tracey who we’ve worked with in the past.

How about past Manchester gigs, what were the Happy Mondays concerts in the city which did stand out for you. Like the ‘Cities in the Park’ (above), the ‘OSM warehouse party’ in 91 or that classic Mondays gig at the Free Trade Hall in 89?

I remember all of those shows you’ve just mentioned. I remember the Free Trade Hall show because the venues front doors got pulled down by a very happy/hippy Salford girl who just rushed the box office and went right through the place, and then later on it got invaded. The ‘Other Side Of Midnight’ show I remember because it was done at Granada Studios and it was for a TV show…that and we were all off our tits. We were all very happy because we were all on E. And the two nights we did at the G-mex I remember because Simon Moran who did many of the Mondays shows (SJM music promoter) told us we’d never sell it out. So it wasn’t Simon who put those shows on. And on top of those concerts playing the MEN arena is always a memorable place to play.

So lookin back at the whole Happy Mondays reunion and the tours the band have made since getting back together with sell out shows and great live reviews…this second wave of madchester with the Roses and the Mondays has really confirmed its place and popularity within British guitar music history, don’t you think?

Well its like when I get asked about these Hacienda nights and other Manchester music nights they put on. The thing is, is that no ones forcing any ones arm’s around their back to go to them are they. And it attracts a wide range of ages too, kids from 18 yrs old to the older generations who saw us the first time around. So its clear to see they are very popular still.

I’ve got a 23year old which lives in the house and he’s out all the time, so its only really through him when he’s playing his music I get to find out whats happening now on the music scene. When he went off to Uni he was listening to rap and when he came back it was the rave scene. And that for me was over 20 odd years ago but its the young ones that have created this new rave scene/culture, well to them its new anyway. But apart from that I don’t know much at all about any of the new music scenes today or see many new bands to be honest. Because having a 7yrs old and a 8yr old girls its stuff like Miley Cyrus and Ariana Grande that gets played in the house, so that’s new music to me at the moment. And when I do put some music on its stuff like The Beach Boys and other 60’s sounds/artists.

The funny thing about the Stone Roses is at the time there were only certain people who got to see them. I had friends around me that were not involved in that scene at all, who were into their 40’s listening to stuff like Wham. They didn’t even know who The Stone Roses were at the time even though they could of well of easy gone to see them live back in the 80’s. So they got to know about the Stone Roses by listening to that album and playing it for 15yrs. Then they all went to Heaton park to see the show. And its great, its great music and its great how its come full circle again. There’s no complaints from me anyway.

As well as the Mondays though its understood the new Black Grape album is all done and soon ready to be released, great news indeed. How do you compare it to your past album releases?

Its the best, really is. In fact I reckon its better than the first album. Produced by Youth and with me and Kermit in good places these days it come together really well. Though back in the day we managed to put out some great music still both me and Kermit had huge drug habits and were living in total chaos. But now we can put a great album out with out all that and we’ve still got the same kinda writing skills we had back then. So it worked out really well for us, better than ever to be honest. 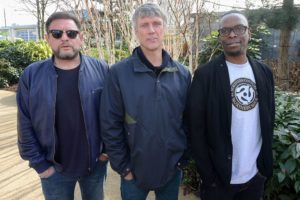 How about the tunes themselves, what type of things have you been writing about and covering on the new songs?

Well our style has always been written as short comical cartoon stories, I always have done. Sometimes I might get an idea when say Bez walks into the room and is talking about something he’s just heard about on the news or I’ll walk into the pub and talk with a friend and maybe use a bit of that situation, and then bring it all together for a song. Its like I’ve been spending time writing up these biopics about what each tune off the album is about, but its more about using a collection of short stories, quotes and themes than one particular meaning, you know. I like to think the listener is able to put their own twist on the songs with something which means something to them.

What would you say the stand out tracks from the album are, and when’s it due to be released?

Everyone of them is stand out really, twelve tracks in all. we’ve got Universal at the moment trying to pick which singles to put out first. As far as its release date, its been put back as the first single was meant to be out in May and the album in June. Now its looking like the single will be released in June and the album following that in July hopefully.

Lastly Shaun, If I asked you to describe the new album in one sentence then, what would it be?