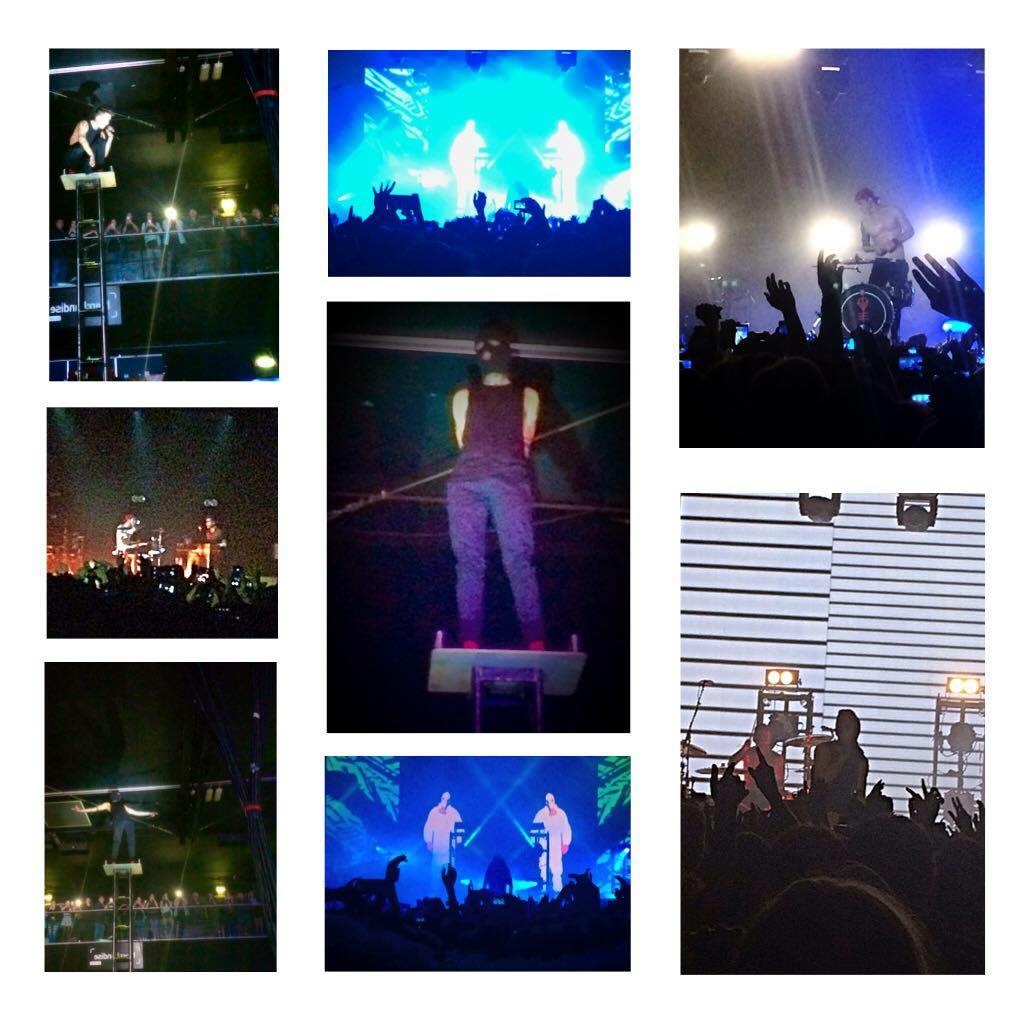 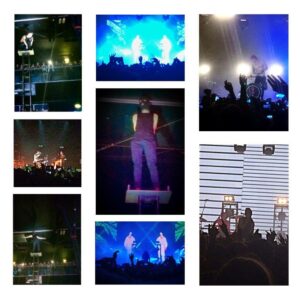 “They say I’m emotional…” Well, I’ve seen some amazing gigs in my time but this seemed to touch me like never before. From the off the audience were such a big part of this experience, it blew me away.

The diversity of 21 Pilots sound is pretty varied. As there’s just the two of them on stage there’s a backing track with bass and synths and beats and tweaks. They blend industrial sounds with rock, hip hop flows with reggae vibes and then we can hear Tyler’s old school real piano compositions and arrangements shine through. He played electric bass on a few tunes and as a frontman he’s got tons of presence.

He goes off stage and returns wearing a Hawaiian shirt and big white shades, playing his ukulele he looked like the grandson of George Formby…from Vegas! This contrasts with his balaclava-wearing Blurry Face entity that expresses the dark and malevolent aspect of the human condition. He alternates between supper geeky and super cool, hugely confident and vulnerable and messed up.

For a two-piece band they really filled the stage and Tyler even popped up on a plinth at the back of the hall towards the end of the show. The back screen videos and light show add to the grandeur of the performance and they filled the space with all of their energy.

There was a little medley section where a drum kit and piano were placed centre stage and they played songs from the first two albums. All the while the audience sang along with this more intimate performance. Then they’re back on the Big Show. I’ve never seen a drummer with his kit, crowd surfing but Josh did tonight. People carefully holding him and his drums up as he played for us. He also performed his signature backflip from a podium to the cheers of the crowd.

The connection that 21 Pilots have with the people is something to behold and left me in awe. Tyler gives people space to shine and be involved right in the eternal moment. When everyone was singing “we are broken people…” It was just that. Artist and audience sharing of each other, empathising and connecting. People looked like they feel special being here, joining in and expressing themselves.

I’ve never been part of an audience that gets so involved with their band. Tyler asks us to crouch down during Lane Boy. Then it goes off into the D&B section. He splits the crowd in half and gets a ‘call-and-answer’ going. This is an indie/alt band but it’s playing out like a Queen show. A real change from the boring ‘think-we’re-cool’ guitar bands who just stand there.

My teenage daughter got me into 21 Pilots around a year ago and she told me of the special connection between band and followers. And although I’d seen videos, I wasn’t quite prepared for the feelings I had watching and listening to this tonight. Every gig may be the kind of event we seek as music lovers, an exchange and sharing of energy, a Sunday night spiritual experience that affects the individual and group profoundly.

I closed my eyes and sang along to Goner, stood there with my daughter who’s about the same age I was when I first started going to gigs and I felt something quite very-very special. And as he left the stage Tyler said “We’re 21 Pilots… You’re 21 pilots!!!” And I believed him, thanks to a great performance from all the 21 Pilots people…

They say I’m emotional? Well yeah, I am…