Home Blogs The Secret Life Of The Novel – new book release by Dean... 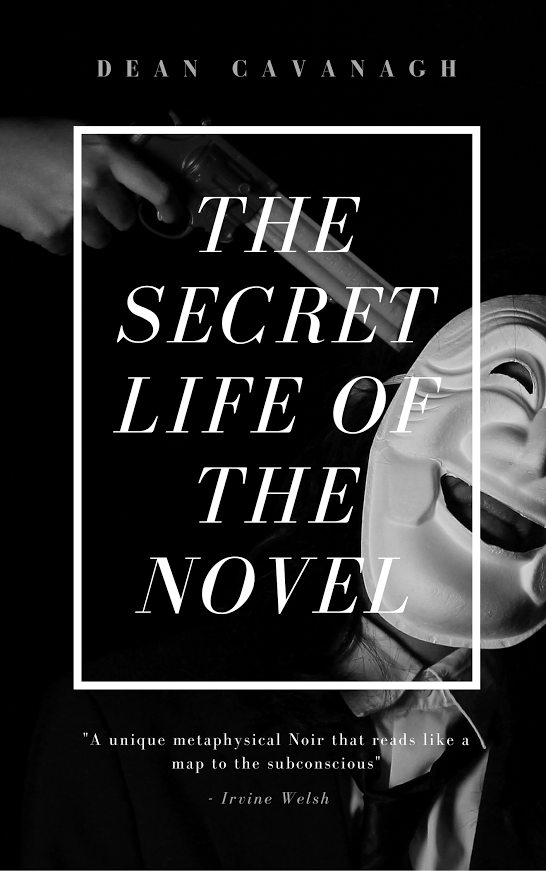 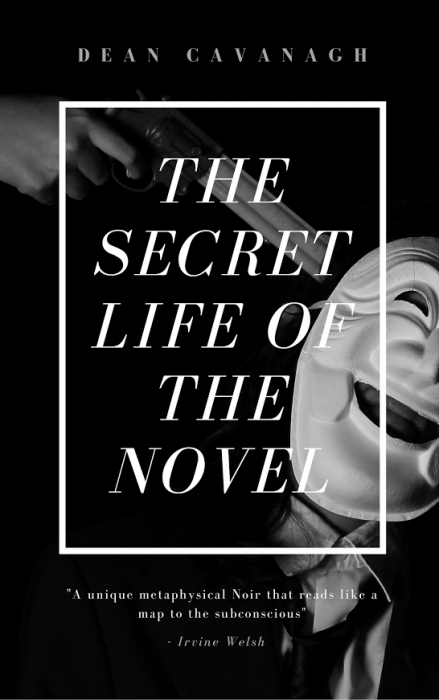 Dean Cavanagh is well known in the counterculture of the UK. He has written, made music and art and been involved in many scenes over the last thirty years and now his debut novel has been published. The Secret Life Of The Novel is not your typical debut novel. It’s long, intense, crammed with experimentation and very challenging. Above all though, it’s very funny in a black humor mix and match style.

You’ve been writing screenplays for the last twenty years. Why a novel and why now?

Well, I got into screenwriting through writing a novel that I couldn’t persuade anyone to publish. A section of it got published in Sarah Champion’s ‘Disco Biscuits’ anthology in the mid 90’s, but I’d moved on by then. I’ve written a few over the years but was never really satisfied with them and didn’t just want to get them out there for the sake of it. I’ve had a really great time writing this one and I’m happy with it so I thought I’d set it free.

It’s a piece that people will either love or hate, which can pretty much be applied to everything I create. In hindsight I’m glad none my early writing got published because I’d be embarrassed by it now. I had a manuscript called ‘Rubber Ring Halo’s‘ that was floating about for quite some time. It sort of took on a life of its own and got passed around in certain circles. It was about a man who gatecrashes funerals and ends up going on a fantastic adventure with the actor James Spader’s doppelgänger. I still get people asking about it but I’m happy that it’s lost in the past.

The Secret Life Of The Novel is a pretty complex and intense book. Is that a fair comment?

It’s not what you could call an ‘easy read’, but there’s plenty of easy reads on the shelf if that’s what you’re after. I like concepts and challenges in literature, sometimes I’m even more attracted to concepts than actual narratives, so I’ve no doubt reflected a lot of my tastes in the novel. It’s definitely an acquired taste and I’m never gonna try hard sell anything I do, but I think readers will be excited and inspired to a certain degree if they pay attention and stick with it. Actually, that might come across as me being intentionally  ‘difficult‘ in the writing, which isn’t the case, it’s just that to do justice to the integral idea at the heart of it, it couldn’t have been written in any other way. I suppose I’ve been faithful to the motivation to write it in the first place.

How would you describe The Secret Life Of The Novel?

It’s a detective story, only it’s the reader who’s playing detective. There’s an interactive angle to it on a certain level. I love detective stories, especially noir and pulp, and I’ve always liked the idea of a reader having to disseminate all the information and by the end of the story coming to their own conclusions about the actual crime and the culprit. The themes are, I suppose, memory, creation and the eternal fight between good and evil, light and dark, like most stories really. People have remarked that there’s a lot of humor and comedy in the book and there are funny episodes, but there’s also a very serious take on how children – our creations – are maltreated and preyed upon. 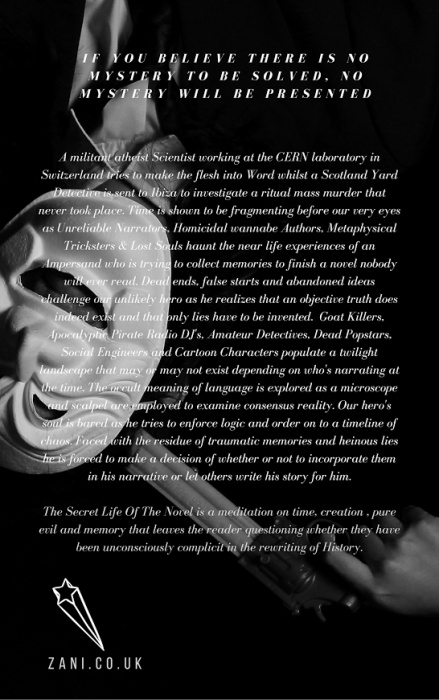 The title sounds quite enigmatic and ambitious.

Yeah, I had this absurd idea of what it would be like if a novel became sentient, or rather it started to write and edit itself. I think we sometimes forget what a fascinating thing a novel is. I had this idea of how if trans-humanism ever becomes a reality, God help us, we’d have novels being written by computers, which they’re already probably doing somewhere. I think the fascination for me has always been getting a glimpse into the soul of the author, that’s why formulaic novels don’t interest me. They’re far too premeditated and manipulated to hit certain points within the narrative, which I think can give plot too much importance. That’s not to say that there aren’t novels that are well structured and also evidently personal, but they are few and far between.
Is your novel more a stream of consciousness?

Well that’s where I think it gets interesting. There’s streams of consciousness in the narrative but they lead to a progression and it wasn’t planned, which is really exciting for me. This detective story idea takes on a life of its own at one point and then folds back on itself. It’s up to the reader how they want to use this information and not everyone will ‘get it’, but it shouldn’t be a problem.

On the cover blurb it says “If you believe there’s no mystery to be solved, none will be presented.”

I really believe that the world’s being divided, not just on wealth, income, sociopolitical lines but on spiritual lines. With the advent of the internet millions of people have woken up to the idea that there’s a spiritual agenda being carried out behind the scenes, and there’s millions of others who don’t buy into that idea. They believe that nobody’s in charge and that everything happens by chance and accident. So on one side you’ve got what would be classed as ‘conspiracy theorists’ and on the other you have ‘accidental theorists’, this binary partitioning view of history. My thought is that with all this information we’re able to access the mystery only gets deeper. It’s almost like we’re being forced into making a choice between believing the body politic having been intelligently designed or simply evolved, which is fascinating if you stop and think about it. If you take the secular view of life it fits that everything is chaos and politics reflects this. If you believe there’s an agenda behind politics that means that there’s some design in place. So either way you’re forced into the intelligent design versus evolution debate without realizing. It kind of underpins the way we interpret everything in our lives. 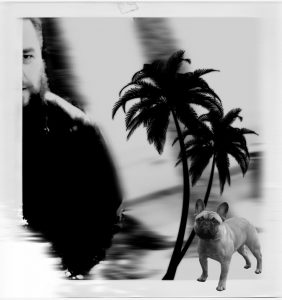 That’s what I noticed, the novel throws up more questions than it answers.

I can only speak from personal experience and life’s always been more about questions than answers for me. Like everyone I’ve striven for certainties but they’re often boring and actually rather unsatisfying when you manage to grab one, because they tend to ghettoize your mind and alienate you from different perspectives. That’s true on both the believer and atheist divide and the left and right in politics divide. I’m not a utopian but neither am I a nihilist, but I am interested in how people navigate a world that is clearly morally fucked up. It feels to me that the more compasses we’re given – moral, spiritual and informational – the more lost we become.

But you don’t offer any remedies or answers, is that right?

You can’t. Literature shouldn’t be prescriptive. There are plenty of areas in the story where my views are incorporated into what the characters are saying or doing, but these are then balanced by other characters’ actions that I completely disagree with. The novels I enjoy reading are never polemical and always more concerned with the human condition and how people either accept it or try to overcome it. Life’s a process that results in death, so surely the fundamental fascination and mystery is in how we deal with that brutal fact.

You seem to have created a recognizable style in the book. Was this conscious?

Absolutely, I love stylistic literature, it goes back to what I said about the author showing glimpses of their souls. We live in the age of social media and it would be a missed opportunity not to recognize that in a story like this. I enjoying playing with styles and mixing up genres. Writers have always done it so it’s not new, but I enjoyed pushing the envelope a bit further and forcing the reader to question who’s actually narrating the story and if they can rely on them and whether what they are being told is just a regurgitation of a lie of a lie.

Will you be writing more novels or concentrating on your screenwriting?

Yeah, I’ve started my next one. It’s kind of a continuum. I’m still writing for film and TV and that’s not gonna change.

The Secret Life Of The Novel by Dean Cavanagh is available from Amazon – https://www.amazon.co.uk/dp/1527201538