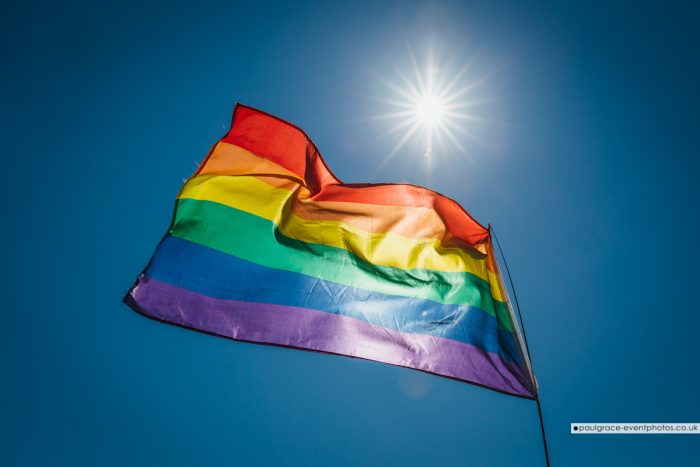 Paul Grace takes his camera and captures the colour and character of this year’s Brighton Pride.

Every summer the LGBTQI community celebrates its past, present and future with various Pride events all over the UK.

They’re all very relevant of course, but many would regard Brighton as the most flamboyant jewel in the crown of all Pride events. Keeping with tradition, this year’s Brighton Pride celebrations culminated in a long weekend of parties and events held all over the city.

On the Saturday morning, the vibrant parade made its way along the sea front, through the town centre and finished up at Preston Park where the official Pride Party took place with numerous stages, tents and areas representing every flavour of the rainbow flag.

Later in the evening, the Marlborough Pub and Theatre hosted a night of cutting edge entertainment, with US drag terrorist Christeene Vale offering the Pride revellers a shocking taste of her forthcoming Trigger show, with her right thigh sporting a fabulous tattoo of Murder She Wrote’s Jessica Fletcher.

Kemp Town and Marine Parade held the Pride Village Party all weekend long with drag performers and DJ’s, while, new for this year, the Old Steine Pleasure Gardens hosted a festival zone with music, street food and cabaret.

The sun shone all weekend long and a top time was had by all. Check out the gallery below for full photo review.

You can find more information about Brighton Pride online here: www.brighton-pride.org, on Facebook and Twitter as @PrideBrighton