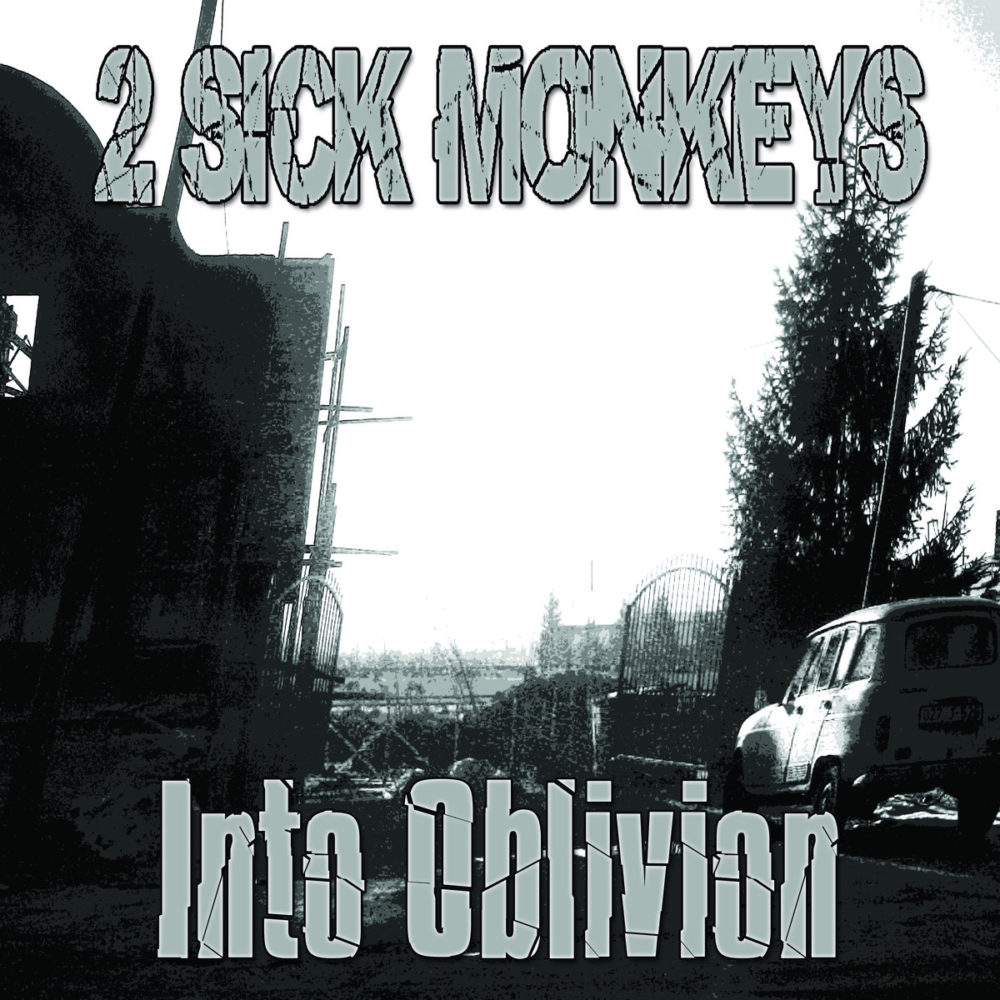 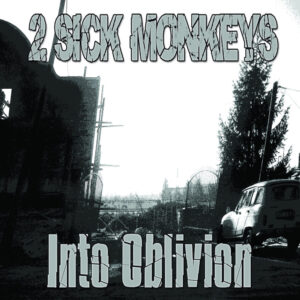 The journey is terminated… granted that line comes from an entirely different group, however in DIY punk circles Swindon’s 2 Sick Monkeys are as equally respected; forming in December 2000 primarily to support Darrin Mooney (Primal Scream) at a drum event in their hometown of Swindon, the two piece of Pete Tower (Bass, Vocals) and , Fred Nus (Drums, Vocals ) have gone on to perform in excess of 1000 gigs, building a cult following as they took their racket to venues, squats, dives and shebeens across the UK, Asia, and pretty much all of Europe.

Now after 18 years Pete and Fred have decided to say sayonara to the UK underground scene with this gargantuan final album, available in true DIY fashion as a joint release on a selection of UK labels, as both a CD and a rather splendid Double green vinyl edition.

‘Into Oblivion’ is a head spin of genre’s, elements of hardcore, simple thrash, pure unadulterated Punk Rock, a splash of Oi, pop-Punk (but not the sort of shit 5SoS peddle), and surprisingly real groove; ‘Into Oblivion’ is surprisingly refined… tracks range from sub 60 second blasts to a prog threatening 6 minutes workout and are the work of not just Pete and Fred but a raft friends who contribute lyrics, vocals and even artwork to the album.

Opener ‘Theme From The Monkeys’ is the perfect starting point, it’s fast, and aggressive, driven by an almost motorik drum beat on which rides a glorious grooving bass line; by the time you realise ‘Public Relations’ is playing its careering to a halt, not before some graveled vocal yelps and backing harmonies, whilst ‘The Endgame’ coming in at a heady 4 minutes gives the track room to develop, the pace is reduced, and that shows the finesse behind much of 2 Sick Monkeys output itself matched by the lyrical skill “The maximum progression, there’s one last move / The ultimate agenda, a planned consequence / We can all imagine paradise / Look into the fire, what image remains?”

‘Waves’ is a real curveball, for anyone expecting the rage of say ‘Inside / Outside’ this one may well have you checking the ABV on that bottle of Buckfast; twin female vocals courtesy of Beanie and Porl feature throughout this slow burner that after a couple of listens emerges as a real gem, ascending vocals apex in a glorious chorus that had me reminiscing about the sorely missed Cuckooland, the track twists and turns around a sinuous bass and once again shows the breadth and sheer range of 2SM.

‘The Boatman’ delivers a kick to the racists, and bigots desperate to maintain their borders whilst on the other side of the fence communities suffer and perish… ‘Before I Die’ takes a more considered approach – it would have to, this one comes in at an opus 6minutes plus, slowing down the tempo and creating a perfect platform for the grizzled vocals which again feature the backing of Beanie adding snippets of welcome colour.

A life’s work tucked into a neat 65 minutes; a fitting swansong to a band who genuinely walked the walk – and they are few and far apart.

2 Sick Monkeys play their last ever gig on December 16th at Level 3, Swindon… don’t end up being one of those people who says ‘Oh, I wish I’d bought one’. Advance TICKETS are on sale now.