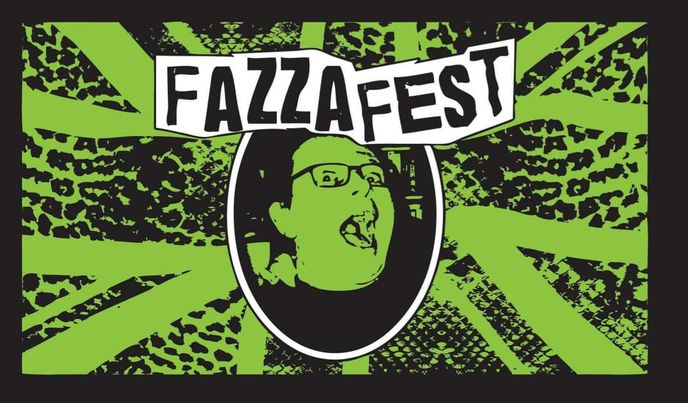 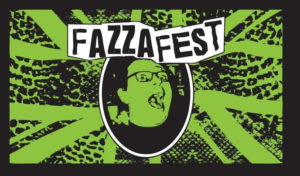 FAZZAFEST: Two-day Bournemouth Punk Fest to celebrate the life of Faren Short – 29th and 30th Oct 2021 at the Madding Crowd in Bournemouth.

Fazzafest is gonna be THE Punk Event of the Autumn for all you Rebellion Punks down South!

If you regularly attended punk gigs in the South of England, London and the Rebellion Festivals over the past forty years you will have seen Faren Short, always ‘down the front’, usually dancing and smiling with a pint in his hand. He went to hundreds of gigs and cut a distinctive figure with his ‘Punk Harry Hill’ look: Glasses, bald head and more often than not a dog-collar, leather trousers and a top adorned with patches and badges.  Once seen, never forgotten.

I was guilty of the occasional drunken ‘Alright Harry Hill’ in his direction, but he’d just smile and say ‘Alright’ back, adding ‘didn’t I see you at the 100 Club when so-and-so played’. and we’d getting chatting. He was a great bloke – punk rock obsessed and a constant gig-goer and supporter of his local (Bournemouth) scene.

When the news broke that his cancer was terminal his friends set up a Facebook group to cheer him up with music and stories and he vowed to attempt to listen to his whole record/cd collection from A to Z before he went anywhere. His declining health coincided with lockdown and he must’ve missed gigs terribly – they were, if you pardon the expression, his lifeblood.

The Bournemouth musicians he admired wrote songs about him.  The legendary Surfin’ Dave went round his house to play an acoustic gig in his garden!  And there was this….which has racked up over 2000 views.

After he died, his brother John posted a piece Faren had written to be put online after his demise. It included this:

To people in bands I watched on a regular basis. I want to say thank you for the music as well as the friendship. There has been a lot of talk since I became ill praising me for supporting live music. I want to say that I did it for purely selfish reasons. I loved nothing better than live music. If I watched your band on a regular basis it means that (at least to my ears) you made great music. I never watched bands on an ongoing basis just because I had friends in them. It was always because I knew if I went to see that band I was guaranteed a great night out. If you took part in ‘Anarchy In The UK,’ by Fazza’s Friends then I will say again that the words don’t exist to express how deeply touched I was by that.

His good friends David Chinery (Chinners) and Ross A. Ferrone (of Rock Regeneration website) have announced Fazza Fest in memory of their gig-going buddy, to be held at the Madding Crowd (pub venue) Bournemouth on Friday 29th & Saturday 30th October 2021. They say:

Faren (Fazza) Short was obsessed with music and particularly the live experience, attending thousands of gigs throughout his life supporting national and local bands. He died earlier this year after a brave and dignified battle with cancer, his legacy is one big party to celebrate his life featuring local live music from bands picked by Faren himself. His request was that all the funds from the event go to the Sophie Lancaster Foundation; a charity that was very close to his heart, supporting personal diversity. We (Chinners and Ross) were given a letter after Faren’s death and asked to put this fitting celebration together, including a raffle featuring band merchandise and gig tickets along with a sale of some of Faren’s own homemade Punk waistcoats/t-shirts.

Pre-punk Faren also ran the Suzi Quatro fan-club and Suzi herself has donated signed CD’s to be auctioned off on the night. She posted regularly on the Farens Friends Facebook group (which has now been re-named Fazzafest). Her support must’ve meant the world to him. A true heroine.

The musical line up is as follows:

Before that though on Monday 25 October at Chaplins & The Cellar Bar there is the obligatory “FAZZA FEST WARM UP!” with….

SELF ABUSE + THE ELECTRiC SHAKES + CONTiNENTAL LiAiSON + LANGUAGE, TiMOTHY!    8pm-midnight. £5 on the door. 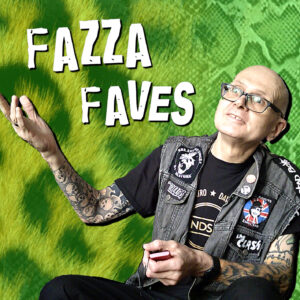 And as if that wasn’t enough, a limited edition CD compilation of Bournemouth area bands is being produced to mark the event – to be called Fazza Faves it includes tracks by Lillettes, Intestines ,The Seventynine, Sporadics, Language Timothy, Self Abuse, Sinful Maggie, Trickster, Mistakes, The Chime, Skaema, Plastic Jeezus, Moonbeams, Standford Road, Spitroast, Ruby and the Roughcuts, Upchucks and Blackwater County.

And there will be a commemorative t-shirt – both only available at the gigs and all profits to the Sophie Lancaster Foundation.

God Bless you Fazza. Gigs won’t be the same without you…( which everyone has said), hence plans for a life-size cardboard cut-out of the man to be in pride of place onstage at the Festival.

Interview with Faren from Feb 2021 here

The Sporadics, The Mistakes and Self Abuse are all featured in this great series of no-budget video documentaries Local Punks….