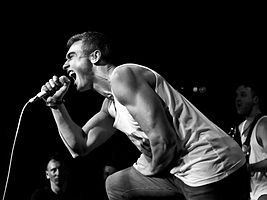 There’s a sort of no-man’s land that some bands seem to cross before hitting ‘the big time’; they’re not a household name, and you won’t necessarily encounter them in mainstream media, but their fanbase is most definitely there, bubbling away just out of sight.

Don Broco are in that place. They have their more hardcore followers who’ve followed them around Reading and Leeds and their support slots since the beginning, but particularly since the release of their newest album, Automatic, there’s been an ever-growing number of newer but equally as passionate fans, and at last December’s performance at Brixton Academy, Don Broco showed that they have the support to pack a bigger venue – and show them a good time – without breaking a sweat.

Part of it, I think, is the way their back catalogue serves as an excellent demonstration of the many different ways you can interpret the term ‘pop punk’. The Big Fat Smile EP and 2012 album Priorities are down the heavier end of the spectrum, while Automatic, although tracks like ‘Fire’ and ‘Money Power Fame’ still have a similar sort of growling sound to them, is more noticeably pop than punk.

What Don Broco does so well, however, is to make music in these different styles, but still have an identifiable ‘Don Broco’ sound. It’s hard to put your finger on quite what that is, but it has the ability to make sweaty post-hardcore fans dance about to a song called ‘Superlove’.

Don Broco’s current tour is an interesting approach. Two consecutive nights are performed in each city, with the first devoted to their Priorities album, and the second to Automatic. As many did choose to do, I’d have gone to both of their Manchester nights – at Whitworth Street venue Gorilla – had I had the opportunity, but tickets were snapped up for both nights so fast that they – and the extra tickets later released due to popular demand – were all snapped up almost immediately. Almost the entire tour was sold out within a week or so of the tickets being released.

The night was kicked off by Massmatiks. They seem to still be a relatively unknown band, but definitely deserve a lot more recognition. Their style was somewhat heavier than I was expecting, and fits better with that of Priorities than Automatic. Lead singer George Peploe was full of energy throughout, moving back and forth between singing and an almost Parklife-y spoken word to the stomping music, reminiscent at points of Rage Against The Machine.

The stand-out songs of their set would have to be their single ‘Gunning For You’, with its rocky, stompy riffs, and the somewhat melancholy ‘4 am’. Written, according to Peploe, about “crazy exes”, there was a bit of a sense of catharsis during its performance, before finishing up with the much more bouncy ‘Independence’.

Don Broco kicked off with the dancey ‘Superlove’, before following on into eponymous Automatic, with its thudding chorus making five-foot-tall girls scrape the ceiling. They blasted through the rest of the songs, even with the sweltering heat that had the whole room doused in sweat about five minutes in, with their standard ebullience and smiles all around. There was ‘Fire’, pretty much ubiquitously known as a banger, and personal favourite ‘You Wanna Know’ had the whole room heaving. After the sombre ‘Nerve’, under a glittering disco ball, Don Broco threw in their brand-new single ‘Everybody’ for the encore. With a bassline similar to ‘Another One Bites The Dust’, it has a very Broco-y catchiness, and even despite how new the track is, the exhausted crowd still shot right back up to full energy, screaming along over the riffs. They finally bowed out with fan favourite, ‘Thug Workout’, from the band’s early days. Very obviously silly – “sexy girls come up to me, and they always come if you know what I mean” – it’s a brilliant song precisely because of its piss-taking nature, and a Don Broco gig wouldn’t really be right without it.

My only previous experience of Automatic live being the much larger Brixton Academy, I was a little concerned at first that the sound of the album wouldn’t come over well in the smaller, sweatier atmosphere of Gorilla. However, it turned out that it worked just fine, and if anything, revealed a completely new side to the music. According to those who’d been to the previous night, that same energy and quality of performance was upheld then as well.

Don Broco’s live performances don’t disappoint. They’re confident onstage, and they know how to have fun and interact with an audience without getting too sloppy, and I’m deeply jealous of the people who’re following them along this tour.