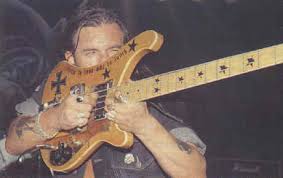 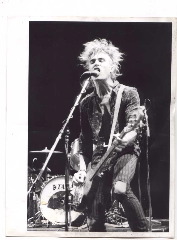 It’s 1984 and the Membranes have just played their one and only gig at the Marquee.

The night has been a fraught occasion.

On one level it’s been euphoric – the place was packed and the reaction was great. On another level the band’s noise juggernaut had been too much for the venue which had just informed us that we were now officially banned from the Marquee.

This time the sheer volume and the band’s death to trad rock were not blame.

Halfway through the set someone had thrown a sandwich into the air and it flew around the venue – the Marquee had got upset making the Membranes the first band to ever get banned from the ‘legendary’ venue for throwing a sandwich around.

On the way out we spied a lone figure sat at the bar looking like the last of the rock n roll gunslingers even then. It was Lemmy. 100 per cent Lemmy.

Lemmy was a big part of our ‘thing’. Hawkwind very much part and parcel of our cultural backdrop of speed driven weird punk rock drenched in magic mushrooms that we collected from the field at the bottom of our road. Hawkwind were Part of the soundtrack to those maggot and fungi trips on ratty floors listening Space Ritual over and over interspersed with Can or, oddly, Never Mind The Bollocks.

Hawkwind were big in Blackpool and remained big even after punk rock. There were still clutches of freaks in lab coats or great coats who were part of our punk rock world and the barriers seemed non existent.

Lemmy, of course, was central to this. Not only was he the driving bass player whose vital bass lines many had learned to play along to he was also now fronting Motorhead who were deeply loved on the scene. Bang smack in the middle of punk rock they had emerged dressed as long haired rockers and IT DIDN’T MATTER because Motorhead sounded like the greatest punk band of them all.

They may have been older. They may have broken all the media imposed dress codes but, like the Stranglers, who we also loved, they looked and sounded like genuine bad asses. These were the band that made sense if you were also a tripping ‘bad ass’.

I remember clearly listening to the the first Motorhead album over and over at original Membranes member Martin Critchley’s house. Lights out and volume up to 11 and the record going round and round in-between our punk and then post punk collections it sounded great. When I first bought a bass that Lemmy gnarl was part of the sonic DNA that we were aiming for. When I carved the violin bass up in the street with a penknife I lucky managed to end up with the toughest, meanest and heaviest bass sound by accident though it has to be said that 80 per cent of bass sound comes out of your fingers.

The other thing that everyone was so proud of was the Lemmy had actually lived in Blackpool when he played in the Rocking Vicars. Ten years later we were treading the same stages as one of the wildest bands of the sixties. The Rocking Vicars were actually till going at this time and playing the local cabaret circuit. We vaguely knew who they were but their world was now a long way from our world but Lemmy was central to both and he had lived in Blackpool. He had even gigged with the Vicars in local pubs in Cleveleys very near to where to we lived – pubs like the Queens and the Victoria where they had played residencies.

Several of my older hippie friends like the great Fes Parker or Bruce from Bruce and the Spiders had even known him from back in the day and had a few anecdotes about him.He as part of our cultural heritage – the one we wanted and not the clowns and circus one that we had to put up with.

And there he was sat at the bar of the Marquee looking like a psychotic warthog. We went up to speak to him not knowing what kind of reaction we would get. He was gruff of course but during the whole of the fantastically dumb conversation never let that ironic smile leave his lips.

We started by talking about Blackpool and he told us how he had to get out because he had to be in the centre of what was going on and didn’t want to end up in cabaret like the Ricking Vicars had done. He told us how he had come down to London in 1967 and a few days later was roading for Jimi Hendrix which is about as cool as it gets.

Then we challenged him on who had the loudest bass.

This seemed to change the conversation.

He had just seen the Membranes set so he knew just how loud the bass was but just would not have it that it could possibly be louder than his bass in Motorhead. We locked high decibel, grinning horns over the loud bass issue. No-one was going to let this one go. The conversation wound around for quite some time about the niceties of the loud bass and how and who was the loudest in a classic rock stand off. Lemmy’s moustache twitched, our exploding hair twitched back. Hands were waved attempting to describe the sheer joy of the avalanche of volume.

And why should they? We left still in love with the Lemmy bass and the legend himself.