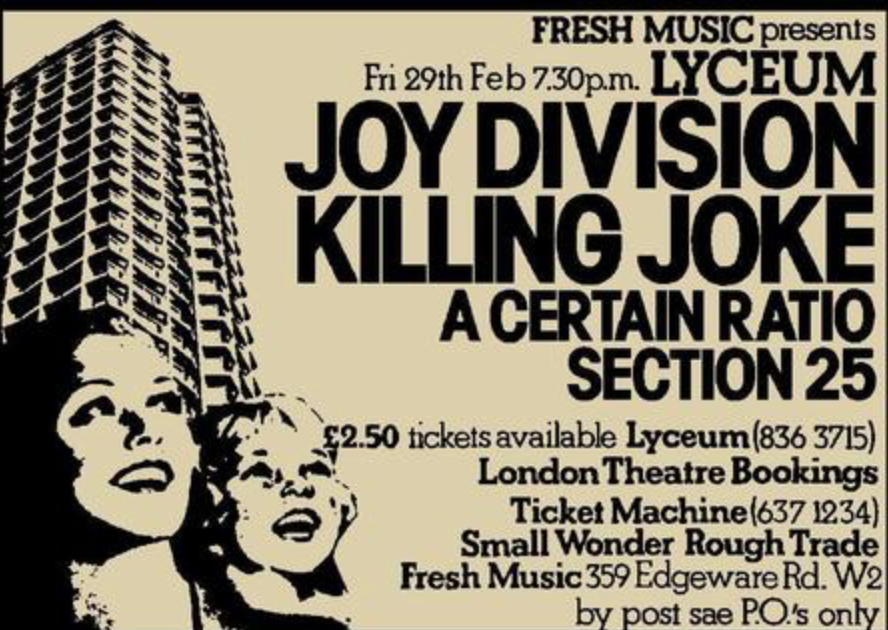 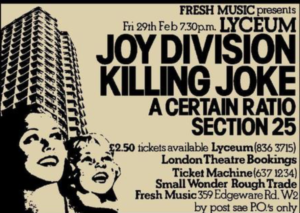 The first was at ULU, that was the one where Joy Division dropped “Love Will Tear Us Apart” into their set for the first time. It was one of those moments in popular music history where everything changed and would never be quite the same ever again.

We didn’t get off to a great a start with Joy Division because we didn’t know about their Nazi skinhead punk problems.

They’d had a massive fight at a gig with some skinheads a short while before ULU. Its in the 24 Hour Party People movie.

We had a proper geezer called Wally with us, from down Shepherd’s Bush way. Some people (Wally probably) claimed he was the same Wally who had been in The Sex Pistols for a short while. I don’t know. He was certainly aptly named. He was also a purveyor of rather fine “alternative substances” (if you get my drift), particularly of the fast variety.

We were sharing a rehearsal room called Ear (in Frestonia, Free London) with Motorhead at this time. We were, in fact, being mentored by Lemmy and his gang. We used to share the rehearsal rooms with them and we frequently sat in on their rehearsals. “We” were mainly Alex Paterson and me. We were Killing Joke’s road crew and we watched and learned what Motorhead did. In particular, we learned their “warm-up routine”. This involved one of their roadies wracking out three long line of whizz on the snare drum. Then the band would arrive. They treated it like clocking in. They’d say, “morning”, “morning”, “how’s it going?” to each other. Then they’d hoover up a line of whizz off the snare. Smoke a fag whilst it kicked in. Then they’d plug, “1,2,3,4” and off they’d go. They’d tear through their set, usually in less than half an hour.

It was so loud in there I often wondered if my face was going to melt. I still wonder how I have managed to survive that intense volume without going completely deaf. This was peak period Motorhead, “Bomber”, “Overkill”, “No Sleep ‘Til Hammersmith” and the rest. When they were done, one of them would shout “pub” and they were gone. That was it. Ultimate rock n roll. What we lived for. That’s how they did it. So we aspired to doing it that way too. The most intense rehearsals the band could create. Very very very loud. That was what sounded best. And copious amounts of weed and whizz, which Wally usually supplied. Allegedly.

Anyway, I digress. Wally got caught in ULU letting a load of skinheads into the gig through a toilet window. We got the blame for it and Joy Division really disliked us for a while. They assumed we were the southern branch of the Nazi skinhead punk society, or something. For a moment there was a strong possibility of us getting booted off the shows all together, though Rob Gretton, the legend, smoothed those waters over fairly quickly. We got on fairly well in the end.

I still remember ULU as being a brilliant gig. I was a massive fan of “Unknown Pleasures”, I thought it was one of the best albums I had ever heard in my life, made by one of the best bands that have ever existed. I still think that. So hearing it live, plus Love Will Tear Us Apart for the first time, was a privilege.

After that, we went to High Wycombe. Joy Division eventually released their set from that gig, plus some of the sound check, on the deluxe edition 2CD set of Still that London Records released in 2008.

I have to tell you, when I put that High Wycombe CD on and the soundcheck recordings played, almost twenty years after the show, I had the most vivid flashback. I was there in the hall again, I could almost smell the stale beer from the previous evening’s entertainment.

I had my one and only conversation with Ian Curtis that day. I had two encounters with him. The first was a close one. (See what I did there?) It was in a corridor in the venue. High Wycombe Town Hall. I had to walk past him and he was having a paranoid attack, or perhaps he still had thoughts that we were Nazis angling to attack him. He pinned himself against the wall and looked hunted as I walked past. I just said, “all right mate?” or something like that and went on my way.

A bit later, we were in the dressing room, when Ian appeared. He was carrying a six-pack of lager. Lager was what the promoter had put on the rider. He looked at me and asked, very politely, “can I swap this for some stout?” I shook my head, “nah mate, you are down south now, they don’t do stout”. I probably added something like “the soppy southern jessies” as I was prone to do back then. Ian looked sad, grunted and disappeared again. That was it, my one and only conversation with the legend and at that point, the biggest hero, in my universe.

And then to The Lyceum Ballroom. The Lyceum was the primary show to do in London at that time. It had been a big band venue around wartime and Bob Marley recorded his first incredible Live! LP there. The one with the live version of “No Woman No Cry” on it that busted the singles chart when Island cut it on a 7. It was a brilliant venue to play, nice big stage, big payday, full house, streams of sweat running down the walls. Killing Joke followed by Joy Division, my Lord, what a show. We broke the box office record that night, the most tickets ever sold for a Lyceum show, or so the promoter claimed. The fool. That just meant that he had to pay us more didn’t it?

EG Records came to that gig. They had been sniffing around Killing Joke for a few months and that night was the final piece in the jigsaw that convinced them to sign the band. We (the management) didn’t really want to sign to them to be honest, but we were so broke and Killing Joke got so popular so quickly, we had to do it. To be fair, EG treated us like kings. It was the aftermath that was the problem. If you want to know the gory details of what it was really like to be signed to a label as rich and powerful as EG were at that time, try and track down a copy of the legendary “Fripp letters”. I think some of them are archived on King Crimson’s website. They are an amazing document of EG’s lack of true diligence and their criminal underbelly, as well as being a wonderful insight into Mr Fripp’s remarkable mind.