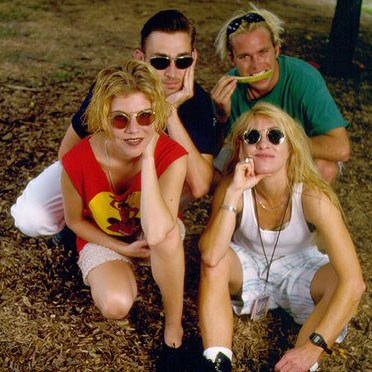 Call me strange, but whenever I head up the hill from College Green towards Park Street, two thoughts cross my mind. Italian gelato in my belly, and a certain musical genius who happens to be gracing these very Bristol shores this Wednesday, no less.

Swoon – selling all manner of delectable varieties of gelato. Swoon – also the name of a song taken from 1997 album, Lovesongs for Underdogs, written by Ms Donelly aka one quarter of Rhode Island band, Belly.

Don’t get me wrong, when food is concerned, I’d struggle to prioritise many of life’s essentials above the concerns of my appetite – but one exception I will always find the time for, is music. It is soul food, after all. Ever since I was an impressionable teenager, I have filled my ears, my heart and my belly with the music of, erm, Belly.

So you can imagine my delight when I heard the news that this band, whom I have somewhat held in high esteem since those hopeful school days, were due to reform this summer. More than twenty years since they released their debut LP Star in 1993, and their follow up, King, in 1995. Upon discovering Throwing Muses on a mix tape given to me by my favourite maths teacher (no word of a lie – it was part of my education, with Counting Backwards opening the cassette), just a little too late to experience this music (real-time) I was pained to learn that my new favourite band had evaporated, and the moment had passed.

However, it seemed my prayers had been answered, and lo and behold, in 2001, it was announced that Tanya was due to release her follow up to Lovesongs for Underdogs, with her first full length album since the birth of her first daughter Gracie – to be titled Beautysleep, released in 2002. This was preceded with a beautiful collection of songs, titled the Sleepwalk EP. Included in these songs, was Last Rain (perhaps paying tribute to one of Tanya’s own idols, Emmylou Harris, within the lyrics) and After Your Party (originally intended to be recorded by Chris Toppin’s (formerly of Fuzzy) old band, Show People, in a clearly countrified version).

“Belly were one of the prime influences on my first band, Helen, where we had a real DIY ethic. I was addicted to their album Star as a teenager and learnt loads about guitar playing just listening to them. They made me realise the most important thing in music was to express yourselfand get your ideas across, without worrying about playing like a virtuoso.”
– Corinne Bailey Rae

More than a decade has passed since then, and although there were no signs of Tanya’s former band Belly reforming, it was not unnoticed that her prolific songwriting days (cue: River, Pools in Eyes, Green, Dragonhead and Angel) in Throwing Muses and then her own band Belly, were definitely not over with. Tanya went on to release another two solo albums – one of which, Whiskey Tango Ghosts, was performed in its entirety at a special, one-off event held in a tiny town in Vermont, home to former Fort Apache king, Gary Smith – inside a beautiful, pin-drop acoustics church, alongside husband Dean Fisher and Elizabeth Steen on keys. The resulting songs were beautiful, stripped back and honest as they come. Next up was the live recorded This Hungry Life, again performed in that same town in Vermont, but this time to a live audience, and featuring Joan Wasser on violin among other coveted musician pals. This record, released in 2006, also paid homage to a certain Lucinda Williams, in the track World On Fire where Tanya refers to Lucinda’s Sweet Old World. And the final track, a tribute to the Beatles’ George Harrison, in a cover of Long, Long, Long.

Talking of the Beatles, Liverpool’s Parr Street Studios was partially responsible for the resultant album, we found in 1993’s Star. Also recorded over in Nashville at Sound Emporium Studios, the record went on to sell over 800,000 copies, earning the band several Grammy nominations and a contract with a gigantic clothing brand, for their single Feed the Tree. It was the Beatles whom Tanya and her step sister Kristin would base much of their self taught guitar lessons on, as pre-teens growing up in the small community of Middletown and Newport, Rhode Island. Soon, they would form their band Throwing Muses, and when their demo tapes made their way to Ivo Watts Russell – co-founder of indie label based in the UK, 4ad, they would be invited to accompany the Pixies on their first UK tour – as photographer Phil Nicholls recalls:

“I worked with the Pixies on and off, and I was lucky enough to be on their first UK tour.  Just being there was fabulous. Bowie was a great fan. I took some pictures of both bands (Pixies and Throwing Muses) all together, we mixed them up into one big super group.”

For me, discovering this music as a teenager myself, a decade or more after the band began playing, seemed both incredibly inspiring yet also a little disappointing. Would I ever get the chance to see them play live? Were they over? Did these people even exist anymore?

It seemed that they did, and as I played Two Step, and listened to every word with my ears pressed against the speakers, I realised that I too, was two steps behind the rest, and maybe I had found a kindred spirit within this music. Or at least, I thought so. It got me through my teenage years, until, aged 19, I ventured to London on a five hour long National Express coach ride, leaving my dear Mum sitting in a pub on Tottenham Court Road reading a copy of The Mail from cover to cover, and back again, probably more than fifteen times, just to pass the time as I watched Tanya Donelly play at ULU – with Mary Lorson (aka Saint Low) in support.

I couldn’t believe my luck. The songs that guided me through my awkward years, appeared in dreams on splintered stages, plaid shirts, and two sisters, hadn’t disappeared. And so for a while, this music became my raison d’etre.

So with nothing more to say, I am honoured to introduce the band who literally kept me company for more than half of my lifetime. This Wednesday, get yourself down to the 02 Academy on Frogmore Street, where you’ll get to rekindle the days of Star and King, as Tanya, Gail, Tom and Chris bring these songs out of the shadows, and into the light (darkness, ugliness and beautiful nightmares, all in). As they did once say, sometimes there’s no poison like a dream.

Tickets to Belly at 02 Academy in Bristol are priced at £20 (+ booking fee) and available from Bristol Ticket Shop. Star is also available on vinyl and can be purchased here. You can find Belly on Twitter and at their official website: www.bellyofficial.com

Belly will then play a series of live shows across the pond, in the USA starting on August 9 in Boston.