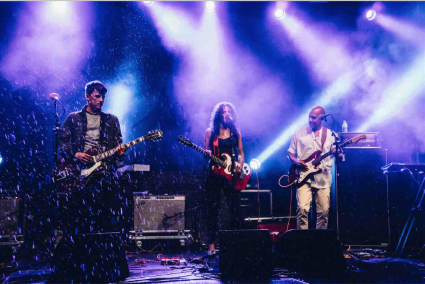 Kickstarting the sound that eventually gave birth to such genres as shoegaze, triphop and postrock, and putting the 4AD label in a position where they were finally able to turn high profits (through the M/A/R/R/S project),  he reformed A.R.Kane performance is one not to miss – the first in London in over 20 years.
As for new music, the latest ‘Cherry Popsicle’ single from Austin, Texas-based Ask For Joy may give you a good joltl to start the week. Equally as thrilling in the alternative rock / shoegaze / postpunk camp are Stella Diana and Manon Meurt, with both Novanta and S T F U (the latest project from Dean Garcia of Curve / SPC ECO) blending in a fair bit of electronica as well. Novanta will also be welcomed by lovers of indie pop and S T F U by lovers of dark wave.

After performances in Spain, Portugal and Estonia at Primavera Sound, NOS Primavera Sound and Kumu OO Festival over the past few weeks, reformed pioneering dream pop outfit A.R.Kane will next be playing at or The Good Ship in London on July 13. They have been annouced for the line-up for several other festivals this summer, including the Siren Festival in Vasto, Italy, the Half Die Festival in Rome, and Britain’s On Blackheath Festival.

The first to coin the term ‘dream pop’ back in the 1980s, referring to the music they make, A.R.Kane went on to influence everyone from My Bloody Valentine and Slowdive to Andrew Weatherall – whose long-running night A Love From Outer Space derives its name from their seminal 1989 track, and also were an important progenitor of such genres as shoegaze, trip hop, acid house and post-rock.

Last summer, A.R.Kane made several festival appearances with the new line-up featuring original ‘Kaners Rudy and Maggie Tambala, as well as a new member – Andy Taylor. Their festival repertoire for 2016 includes classic A.R.Kane songs, alongside new material. They have just played Manchester‘s Soup Kitchen – the first time an A.R.Kane line-up has played a non-festival headlining show in 22 years (the last ones were at CBGBs in NYC and at Hammersmith, supporting David Byrne).

“We are still firmly entrenched in dream pop; from psychedelic folk to trip hop, from shoegaze to electronica, dub and experimental noise … we are focused on live performance more than ever before”. Their performance now combines 3 voices, 3 guitars, effects-drenched noise intervals, beats, loops and live synths, creating a fresh space for their structured Dreampop songs.“We have a bunch of new songs and are going to start recording this spring – we’d like to release something soon”.

The band will also be recording new material this year. In the meantime, the band is collaborating with Canadian-Ukrainian dreampop duo Ummagma on several new tracks for release in 2016. Most recently, A.R.Kane worked witih The Veldt to produce ‘And It’s You’ on their new EP ‘The Shocking Fuzz of Your Electric Fur’.

East London duo Rudy Tambala and Alex Ayuli originally formed A.R.Kane in 1986, disrupting the UK music scene by combining groove-based music with indie rock. Refusing to being categorized, they coined the descriptor “Dreampop”, with the term being widely adopted by music critics thereafter. Widely recognized as one of the most influential bands of their era, they laid ground for many musical genres that came to dominate the alternative music scene. AllMusic describes A.R.Kane as “the most criminally under-recognized band of their era”. The Guardian calls their work “some of the 80’s most extraordinary music”.

After releasing their debut EP on the One Little Indian label, they moved to 4ADin 1987 and issued the Lollita 12″, produced by Robin Guthrie of Cocteau Twins. Alex and Rudy later released through Rough Trade and David Byrne’s own label Luaka Bop. During their brief stint on 4AD, A.R.Kane collaborated with label-mates Colourbox to produce the sample-heavy dance track ‘Pump Up The Volume’ under the name M|A|R|R|S. They blew the top off the UK charts, reaching number one – the biggest single to ever have appeared in 4AD’s history to this day.

Recording highlights include A Love from Outer Space, the two albums 69and“i”, and M|A|R|R|S Pump Up The Volume/ANITINA. In 2013, One Little Indian also released a double CD ‘Singles Collection’ to great critical acclaim.