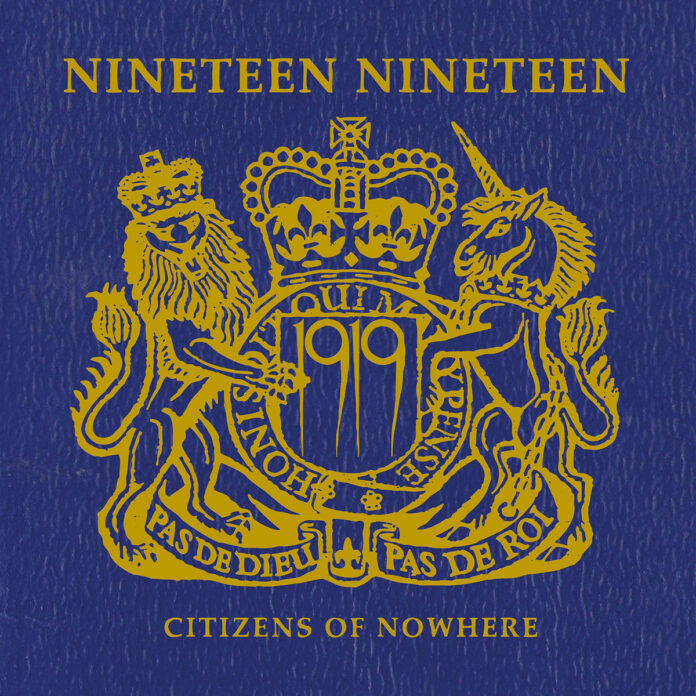 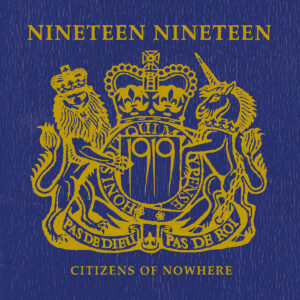 “All my troubles and obstacles, have strengthened me” Walt Disney

I doubt anyone would expect a quote from the creator of dayglo lit cartoon fun to be the opening line to a review of the latest release from pioneering goth’s 1919. With a back catalogue of titles that includes Repulsion, Death Note, Private War, and Caged, I perhaps should be flicking through the thesaurus at the section marked dark & moody – however Citizens Of Nowhere is far from the dour, doom laden, icy tones of many a goth release.

1919 seem to be a band beset by not just obstacles but by tragedy, recently they lost guitarist Mark Tighe to cancer just as they reemerged after a 30-year hiatus to release Bloodline in 2017. Having signed to Cleopatra for 2019’s Futurecide album which included the final appearance of Tighe, a major US tour was lined up – this was curtailed by the Federal shutdown as visas were not issued, similarly Cry Wolf era Bass player Steve Madden also suffered the same fate as Tighe, whilst prior to the Coronavirus lockdown 1919 said goodbye to another close friend, and long-time crew member (and Leeds Utd mascot) Kev Holroyd, who lost his battle with cancer.

Most bands would call it a day, but 1919 are not like other bands, welcoming new bass player Ding Archer (ex- PJ Harvey, The Fall, Pixies, and producer with credits including Witch Fever, The Membranes, Cabbage etc.) they set about crafting Citizens Of Nowhere – the resulting nine track album is a joy, a collection of songs that arc back to the bands roots whilst clearly signaling their future.

Opening track Borders instantly positions itself within the goth genre, the rhythm section pairing of founding drummer Mick Reed and bass player Ding provides a solid propulsive platform for the shards of sinuous lead guitar and Rio Goldhammer’s distinctive vocal delivery, similarly the pounding drums of TV Love are a force to behold as Goldhammer rails about being stuck inside with just the TV for stimulation. The pulsing Feels Like Forever is more contemporary, it plays with the goth form at times touching upon pop at its finest, it is much more melodic, coupled to an achingly gorgeous vocal refrain as Goldhammer laments driving around and bickering with your bandmates.

The commanding vocal of Demigod is perfectly complimented by a threatening guitar riff which cranks up the aggression, the entire track again built around that rhythm section that pummels its way into your head as they decry the creeping rise of populism. Only The Good drifts back to more traditional goth territory, dark throbbing bass, distant snares sounding, drawled backing vocals but it’s the vocal melody that carries this one through – a biting critique of those who decry young protesters, mocking their desire for a better future; this is 1919 both revitalized and pissed off with the current political climate.

Singing To The Universe was rightly picked as the lead single, a haunting keyboard glistens, the guitar slicing through the gloom as the drums pin you to the floor, this track sounds huge, it twists and slithers to the anthemic chorus; should we ever return to live gigs this one will see the arms aloft, mosh pits writhing! The precision twisted funk of Jackie is equally compelling, driven by a drum pattern that had me recalling the likes of 23 Skidoo, and ACR – a juddering guitar ahead of a bass that emits dark shadows, the urgency and intelligence of the track – 1919 have never sounded more contemptuous.

A delicate keyboard heralds Sweet Blue Murder which then breaks through, drums and bass cascade around you, whilst Sam Evans provides urgent gnarly guitar.
A Gilded Cage wraps things up, its almost triumphant sound and lush chorus belies the subject matter, a song inspired by a documentary about Saddam Hussein’s body double. You can have anything you like, except your freedom.

With Citizens Of Nowhere, by drawing on their ability and vision, 1919 have stepped forward; they haven’t sounded this this tense, this hungry yet perfectly polished in years; the fact that they’ve delivered such a statement nearly four decades into their career makes this album all the more impressive.