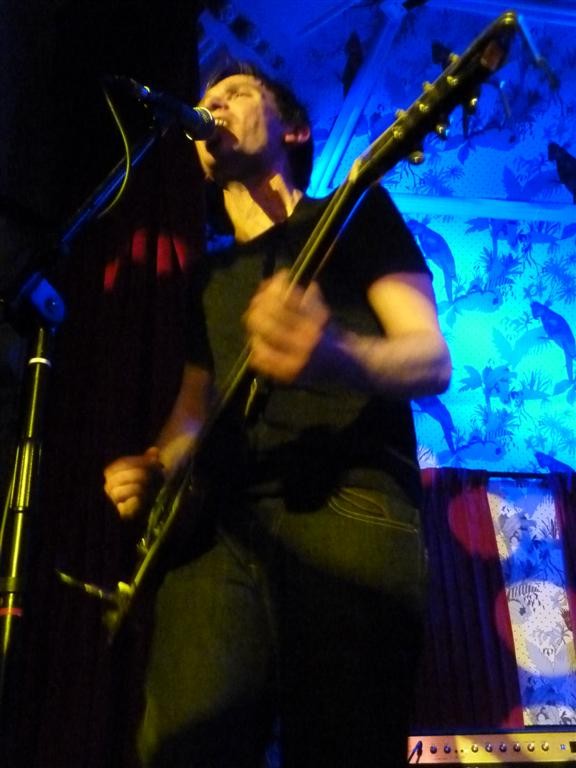 There’s not many bands you can go and see, and wake up the next day, and still be humming their songs, especially when you don’t own any of their records, but field Music do exactly that! They’ve been going for a while now, but they’re not exactly household names, unless your name is 6 Music’s Marc Riley, who is a huge champion of the band.

Tonight’s support are Liverpool based Stealing Sheep who have a lovely Velvet Underground-esque sweet pop sound. They are 3 girls who all sing. They have a stand up drummer taking centre stage, pounding rhythmically on a floor tom, snare and symbols, flanked by guitarist and keyboard player. They’ve improved infinitely since I last caught them last summer in Ruby Lounge, and I’ll definitely be catching them again. All 3 girls take turn on lead vocals, with new single, “I Am the Rain”Â making an appearance late in the set. The crowd really warm to them, despite them sounding nothing like the headliners, giving them a huge cheer at the end of the set. Great stuff!

After a half hour wait Field Music appear. They were formed by David and Peter Brewis in Sunderland about 8 years ago. The pair of them switch instruments between drums, keyboards, guitar and vocals, umpteen times during the set. They are flanked by an additional guitarist and a new bass player, who both also play keyboards; they jokingly mention they buried the last bass player under their new recording studio.

They’re really tight tonight, and they would have to be to reproduce their spiky pop live, it’s not the sort of music you could play drunk. There’s a bit of early Sparks about Field Music and most of the set is based around the Brewis brother’s lead piano lines. The set is two thirds back catalogue and a third of new material from their album “Plumb”Â. The old familiar songs get good cheers from the sold out crowd, and some of the audience even start dancing, which is not that easy to weird time signatures, even the Stealing Sheep girls have a go, stood as they are in the front row.

Several bands cite Field Music as an Influence, Dutch Uncles (who are here tonight), and New Hips are 2 Manchester bands that spring to mind. Field Music themselves owe more than a little to The Cardiacs, who are sadly no more. If you’re in to off kilter pop music give Field Music a chance, on this performance they’ll be back later in the year in a larger venue, fantastic stuff indeed!

Field Music’s new album “Plumb”Â is out now on Memphis Industries on Plumb coloured vinyl!
Stealing Sheep’s new single “I Am the Rain”Â is also out now; they have further support slots coming up, with Field Mice and Sea of Bees.