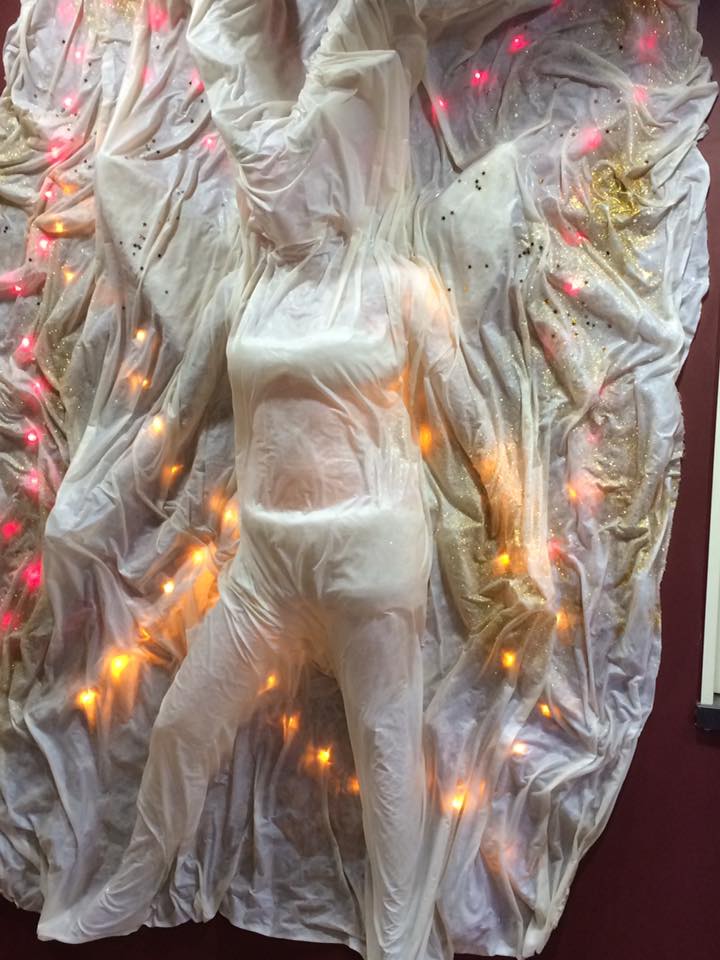 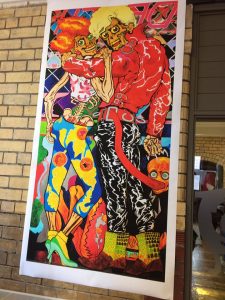 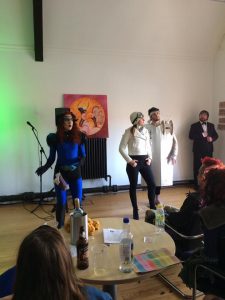 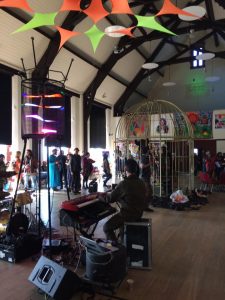 Influenced by 1967 event The 14 Hour Technicolour Dream and hosted by Greg Wilson’s label Super Weird Substance, the seventh Super Weird Happening took place at The Florrie in Liverpool. The eclectic event drew inspiration from the 1967 event whilst celebrating the rich vein of modern counter-culture. Louder Than War sent Roxie Gillespie to spend an April fool’s day to remember.

The excitement and the vibe hit pretty much at the door. Progressing into the fine Victoriana of The Florrie, people were stopped, examined by a gaudily dressed man with a strong magnifying glass and designated a colour. Marked by a paperclip marking, people could then move into the rooms and corridors of the building.

Walking down the corridor, the first room in had some of the buildings history and a shop of delights, with tempting posters, books, music and clothing on offer. Then came a fantasy corner shop, surreal and just perfect. The day was gray, so the outside area with its food vans seemed a little forlorn, waiting for the late sun that would fill it with people later in the day. The Florrie café was warm and welcoming. A place that serves the elixir of coffee always draws people to its heart. The art work on the walls was worth a visit in itself. The collages were a set of wonderful ceramics by artist Phil Hardaker. 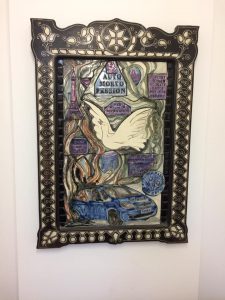 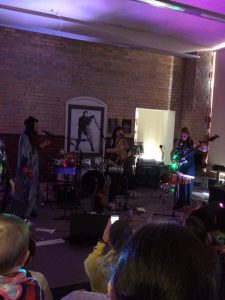 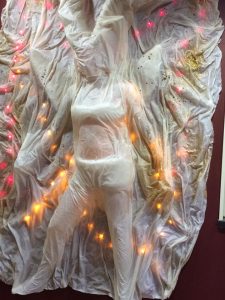 The Dingle Be-In was obviously a gym, with interesting trapezes and ropes hanging tantalizingly unused above the stage area. Watching the panel on 1967 was a fascinating look at people who lived through the era, in San Francisco, London and Liverpool.

Melinda Gebbie was especially vivid in her reminisces of landing up as a run-away in San Francisco in 1967, speaking about the bad as well as the good in a time which has become more myth than reality. Similarly, the panel talking about Matthew Street in the mid to late 1970s gave a fascinating insight into the era. They included the way the dream of psychoanalyst Carl Jung has woven into the actual history of the city, his dreamscape made a vital part of Liverpool’s identity. With a panel including Jayne Casey and Bernie Connor the anecdotes brought that fascinating, vibrant time to life. Some of the poetry also struck a chord. Nadia Drew’s work evoking loss and internalised pain with a rapid-fire of words, tumbling expertly from both mouth and pen. Levi Tavari brought a touch of Caribbean rhythm and humour with his well-received recital. 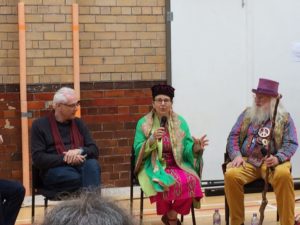 The fell of the day was relaxed and playful, although modern politics, which are an unfortunate fact of life, sometimes pushed into the artistic sphere. The set by The Private Sector had hard hitting visuals and punchy experimental sounds.

The best take on the current ludicrous reality came from Alan Moore with Cometh The Moment, Cometh The Mandrill and the Mandrillofesto. The installation in The Rafters and The Beams main auditorium seeing him shaking fists and waving arms in full Mandrill garb. Resplendent in a purple velvet jacket and shiny purple winklepickers, Alan Moore, was a constant presence. He watched his wife, Melinda Gebbie during her panel appearance and mingled with the crowds throughout the day. Accessible and gracious at all times, he seemed to be enjoying the event and gave a fantastic ‘in conversation’ style talk to a packed auditorium.

The Rafters and The Beams room also saw a fascinating talk by the artist Jamie Reid who talked the audience through some of his art work. Following Alan Moore, local favourites The Tea Street Band carried on The Super Weird Happening party.

The smaller rooms continued to provide shining gems of entertainment throughout the day. The Undergrowth of Wonder room had music from various DJs including Pete Fowler and Dom Mandrell. Atlantis had a variety of entertainments including Time Travellers by The Red Panda Theatre Company, a fun take on 1950’s science fiction complete with a robot and a dashing heroine.

Room 23 also provided a plethora of pieces. Highlights included the excellent 23 Vortex Sutra by Jeff Young, Hookland: Two Cunning Men, where writer David Southwell interviewed one of the mythical cunning men from his imaginary county and music from Terry Logan, who had the crowd dancing with her fine set.

The sun came out in the afternoon and the steady stream of people increased. The outside areas came into their own as relaxed meeting places, although the sign ‘Jolly Smokers’ sent a slight shiver through anyone who had read Jerusalem by Alan Moore and knew about ‘justice above the streets’. The courtyard was full of people with pizza, Jamaican and other fine food and the alcohol available throughout was oiling the wheels of conversation without degrading the bonhomie. One of the best things was the fact you could take drinks and food into most of the rooms so nobody had to rush to finish their food before the next thing they wanted to see, making it like a gigantic house party. Something the drinks-token mentality organisers of some festivals could learn a lot from. This was organised with love and respect for all concerned.

The only slight criticism was that the live bands were tucked away in a room that was a bit too snug. The Paper Sun room saw sets from some great young talent. Starting with the wonderfully tribal Mamatung using less-than-conventional instruments to the more regular guitars and drums; original and engaging. Samuri Kip seemed far too young to be so musically adept, bringing fine and intricate melody to the stage. Other highlights included set by Ohmns, The Isrights and Strange Collective, although the standard overall was fantastic.

The main problem was seeing everything you wanted to. In addition to the art exhibited throughout the building and the Installations on offer, there was live art and performance, a flash fiction workshop and other tantalising offerings. With some excellent DJ sets from the likes of No Fakin’ DJs and DJ 2Kind, Richie Vegas, Bernie Connor and Super Weird Substance’s Greg Wilson the night wound to an eventual close.

This event showcased the richness evident in the artistic underground and in the effervescent culture of Liverpool itself. The Florrie, a restored building benefited from the proceeds of the event, the performances given freely to a space used by the Liverpool 8 and wider community. The takings from the café went to Liverpool Homeless Football Club. Truly this was the best of human nature on show, the friendliness and culture that make life worth living. A memorable and stunning event that will live long in the memories of those lucky enough to attend.