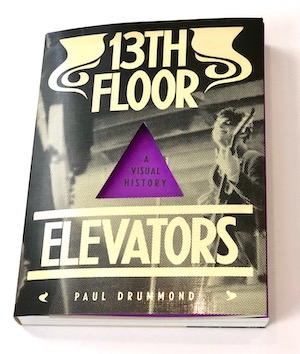 Before I even read Paul Drummond’s 13th Floor Elevators: A Visual History, I could tell that it would be a celebration of the book as a physical object. It’s imposing in size and weight, with textured flaps and pages that serve as a palpable reminder to the reader of what it is they’re holding. It’s not surprising at all to me that Drummond created an object that revels in this kind of materiality. If you ever stopped into his rare book and ephemera shop in London, Pleasures of Past Times, you already know a bit about his work. Pleasures of Past Times was nestled alongside other shops on Cecil Court, yet it stood out. Whether you were window shopping or browsing inside, you were surrounded by a most glorious saturation of books, vinyl, and music memorabilia. While Paul closed the physical store just this past year, it’s still alive on the internet. The digital version of the shop is not so different from Roky Erickson’s reappearance in the early twenty-first century—“like a revenant,” as Drummond describes him in the preface to A Visual History.

The 13th Floor Elevators are legends of the American music scene, creating a sound unlike anything that came before them and influencing an incredible range of bands that followed, from Tex-Mex, punk, and new wave out of Austin to college rock and alternative bands from the U.K. Groups ranging from the Sir Douglas Quintet to R.E.M. and The Jesus and Mary Chain have cited Roky Erickson’s impact on their sound. I mentioned A Visual History just a few days after its publication to Jesse Sublett, the lead singer of the Skunks—another fixture of the Austin music scene and an admirer of the Elevators. “Every musician I knew just idolized them, for their music, for what they stood for,” Sublett told me. “They were like the wind that filled Austin’s sails and put us on the voyage to becoming an exceptional place.” Roky Erickson and Austin, Texas have now become indelibly intertwined for musicians across the globe.

On its face, A Visual History might be a book “about” the 13th Floor Elevators: it proceeds in a chronological fashion as it relates the early life of Roky Erickson and the other members of the band through to their final reunion at Austin’s Levitation Festival in 2015. Yet Drummond already wrote a biography of the 13th Floor Elevators (Eye Mind, 2007) and curated a boxset re-release of the band’s music (Music of the Spheres, 2011). A Visual History is something much different: it’s a 13th Floor Elevators archive that illumines the tactile dimension of music history, beyond the band’s sound. And who better than Drummond to give readers a window into the process of putting together such a collection of rare music ephemera? 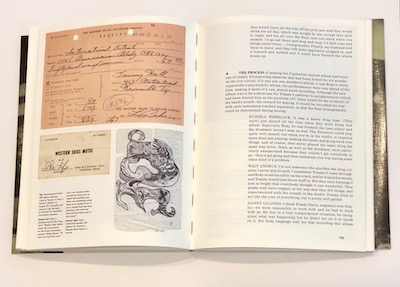 Why do people hang onto cheaply produced handbills? Who covets a receipt? Such pieces of ephemera take on new meaning when they’re placed alongside images of carefully designed posters, photographs, newspaper clippings, and reproductions of record sleeves—they come to tell a particular history of the band. If you’ve ever wondered why someone might collect something like a creased business card from the Western Skies Motel in Houston, Texas, (where the band stayed during the Easter Everywhere sessions) or a piece of stationery from the New Orleans in Austin (where the Elevators performed weekly live broadcasts in 1966 following a radio ban by Austin’s KNOW station), Drummond’s book answers your questions. That business card and that piece of stationery are just two of the hundreds of objects reproduced in A Visual History.

Drummond reveals something that all collectors know, and in so doing he lets his readers in on a secret: that all histories are created, and the architects of those histories wield great storytelling power as they choose and arrange the physical objects that make them. Through the book, Drummond has created a physical archive of the band on the page. These objects, from ticket stubs to records sleeves, are remnants of the past, but Drummond’s collection brings them into the present. In A Visual History, the 13th Floor Elevators is a band among the living.

The book is thus immediate and nostalgic. In moments where newspaper clippings are reproduced to scale, it’s almost as if we’ve entered into a present-past, reading about the 13th Floor Elevators the morning after one of their gigs in Texas in the 1960s, or examining police photos in the aftermath. It all produces a distinct atemporality—a sense of being lost in time—that seems fitting for the Elevators. In his introduction to A Visual History, Jon Savage occasionally uses the present tense, describing the band as if they’re still with us (“the group is . . .”/ “the musicians are . . .”), underscoring the power of this archive of seemingly ephemeral materials.

Leafing through the book, you might even think you’ve purchased a volume of rare 13th Floor Elevators memorabilia—handbills, receipts, advertising posters, etc., all complete with the evidence of their physical handling over the years. Full-page, full-colour advertisements for Elevators shows appear throughout the pages. At times, the reader almost feels as though she’s holding a scrapbook containing some of the most exciting Austin music ephemera one might hope to find. Some of the black and white photos are even reproduced in such a way as to show the yellowed tape that once held them to paper not so different from the physical pages of the book in our hands. A few of those pages even feature large areas of white space, as if inviting the reader to contribute to the archive, or asking the reader to consider the mementos that were lost along the way.

The notion of viewer engagement in A Visual History hearkens back to the way in which listeners sought participation in and connection to Roky’s music—everyone, it seems, has their own 13th Floor Elevators story. Just as the reader is invited to play a role in the creation of Drummond’s visual history of the band, listeners often took an active role in imagining that the Elevators’ “You’re Gonna Miss Me” was about them. As Drummond explains of the song, Roky’s “high school sweethearts have dreamt the lyrics were about them,” and “[h]is family, meanwhile, imagined the song to be about them.”

Circling back to the visual focus of the book: A Visual History is also cinematic, a love letter of sorts to the materiality of film form. The beginning contains “CAST OF CHARACTERS” pages, like a film script. These pages introduce readers to the idea that they’re about to enter into a book that’s much more than a textual retelling. The chapter dividers also underscore the links between film and memory. They’re full-page black sheets with titles at their center, recalling silent cinema title cards. Those pages are “marred” by light leaks and minor scratches, as if we’re watching the flickering intertitles on 16mm film. At a moment when so many digital tools exist to recreate that sense of the past (from Instagram filters to Super 8 apps), Drummond’s book is doing something more authentic, reproducing those visual aspects of film in the medium of the physical book. He gives us an almost synesthetic opportunity to recall the pleasures of cinema and music through an object you can hold in your hands.

Simply put, this is a gorgeous book and should be of interest to anyone who welcomes aesthetic pleasures. But A Visual History should also spark an immediate attraction for a much wider variety of readers—from fans of the 13th Floor Elevators and those interested in learning more about a hugely influential American band, to collectors young and old intrigued by how music ephemera can shape our understanding of music history.

Paul Drummond compiled a playlist of alternate takes and other rarities to celebrate the book’s release, which you can find here.

Audrey J. Golden is a literature and film professor who lives in Brooklyn, New York. You can follow her on Twitter and Instagram, and you can check out her personal website to learn more about her writing and her archive of books, records, and ephemera.