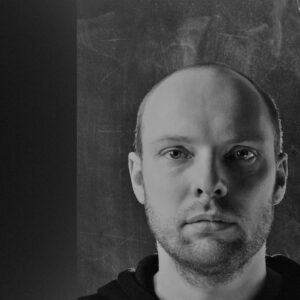 Until now, the five-piece has existed purely as a live entity, one that improvises with an ever-shifting array of instruments to deliver their ferociously unique groove. This recording is one complete recording that has been broken down into nine distinct tracks. Yet even if you listen to the album either as individual tracks, or as one complete documentation, it still works either way. And this is what first drew me to this album and band.

The group themselves offer little insight into their creative process or inspiration, a bold statement when ‘experimental’ musicians seem increasingly obsessed with bolting on narratives to their output. The harrowed screams and pulverising beats that appear throughout the album mean the spectre of black metal regularly looms around the music. In between are blasts of free jazz style brass, fractured electronics and almost romantic moments of piano led contemplation, bringing home 1/2H 1/2W’s frantic determination to be everything other than predictable.

Opening track ‘Dominatrix Endriksons’ offers a gentle introduction and mere hint to the chaos and brutal assaults coming over the next nine tracks. Drone and trumpets meander gently and without much interference, until the fire alarm squealing noise starts that eventually becomes ‘Inbreed’. Combined with ear piercing skronk that starts the track (slash finishes the last one!), we suddenly have an introduction of beats in amongst the rumbling, squealing noise. This is welcome and hints of techno and dance side of this band. This, however, is very short lived, with ‘Maigurs Baiks’ being a full on noise and sample assault. It mixes and stops and starts. It glitches and then it spews more abrasiveness and harsh noise. It’s fairly unpleasant. But if you are into this sort of thing, then 1/2H 1/2W have to be one of the best at this around at the moment.

‘Night Quarry’ is a revelation. It has haunting piano and jarring percussive movements. It’s beautiful and melancholy even with the introduction of some noise. ‘The Music’ is again another welcome relief from the onslaught. Starting off as a messed up skronk spazz attack, it morphs and alternates between harsh noise and melodic interludes. Akin to trying to find a radio station on the top of the mountain in a crappy car with an even crappier aerial, ‘The Music’ appears to be a joyous celebration of the sonic possibilities that the band discover in the studio. Nice stuff.

‘Wurstwasser’ is again a more elongated experimental freak out replete with free form jazz and screeching voices which are really powerful and welcome. With a glitchy finish, this track pretty much runs the whole gamut of the possibilities of this band. The numbers station esque effects lead straight into ‘Sri Lanka Telecom’ which is a gentile and atmospheric track which slowly, but surely introduces free form trumpets and drums. It gets noisy, but not unbearably. It’s more percussive and overall a measured track. And this is very much carried on through to ‘GPS Controlled Drum Machines’. Final track, ‘Lativa to MP3 Conversion Automix’ is another gorgeous and atmospheric piano led piece that gradually leads into a cacophonic celebration that has come from the previous 8 tracks. It grows and grows and the layer of noise, screaming voice, instrumentation, glitchy mess and overall debauchery of the band is laid bare in aN ear drum bothering gorgeous mess. And with that, the album is over.

It’s a relatively short album, but boy do the band cover a lot! It has elements of beats, piano, numbers stations esque sampling and all out harsh noise. Harsh noise may not be for everyone, and believe me I have heard my fair share over the last year or so! However, I think 1/2H 1/2W bring to the table a lot more than just experimental noise. They have a definite percussive avant-garde jazz influence as well as the brass skronk that is brilliantly done and is always welcome. Again, this may not be for everyone, but bearing in mind this is the first recorded release of music from 1/2H 1/2W, I think they have a lot more to offer in terms of composition and accessibility. They have a great name and the album name is also deliciously wonky and weird. A great debut and an encouraging document. I’m looking forward to hearing more from this lot!

Black  Pelvic  Fluids  is  released  with  the  support  of  Skanu  Mezs,  the  Riga  based  festival  and  platform  for adventurous  music.