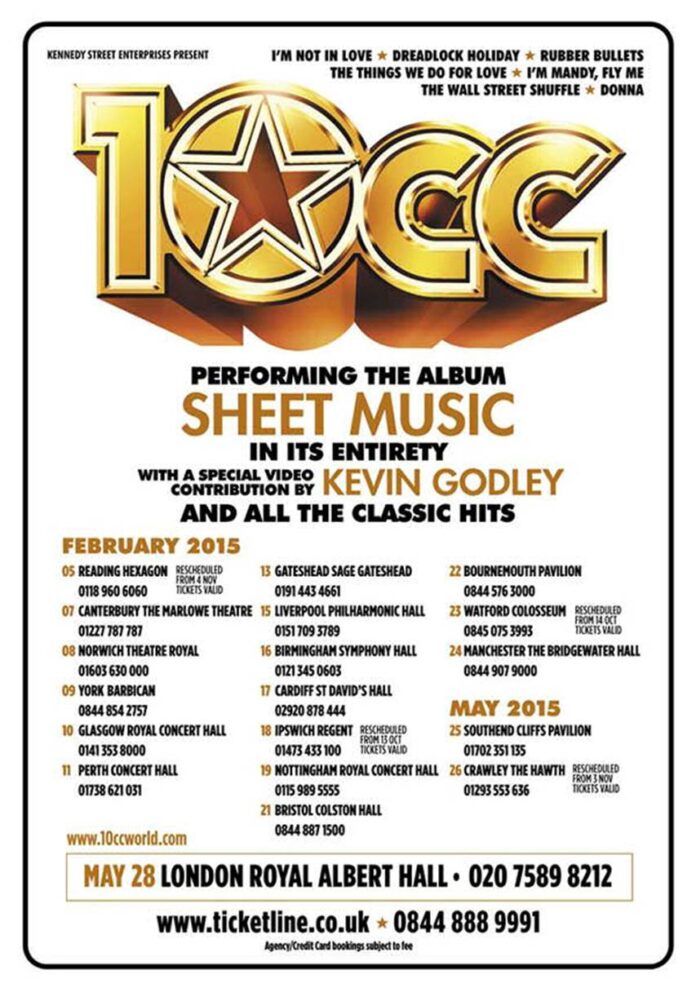 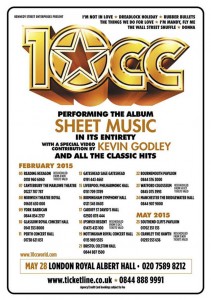 The current incarnation of 10cc play the bands 1974 album Sheet Music in its entirety followed by a greatest hits set. Louder Than War’s Craig Chaligne Reviews.

The current incarnation of 10cc has been the source of much debate amongst the band’s fans. After Lol Creme and Kevin Godley left the band in 1976, Graham Gouldman and Eric Stewart soldiered on for another 5 years with diminishing returns before splitting up. After a couple of reunions in the first half of the 90’s, Stewart finally called it a day claiming “10cc is well and truly finished as far as I am concerned.” In 1999, after 4 years off the road Graham Gouldman assembled a band made of old bandmates with Paul Burgess on drums (drummer with 10cc since 1976) and Rick Fenn (second guitarist that was recruited after Lol Creme left the band) and new recruits Mike Stevens (Keyboards) and Mick Wilson (guitars and vocals). Billed originally as “Graham Gouldman and Friends”, that moniker started evolving into different permutations involving the 10cc name (“10cc featuring Graham Gouldman and Friends”, “Graham Gouldman Celebrates 30 Years of 10cc”) and finally became 10cc altogether for the past few years. It is a shame that the pressure of the promoters has led to the band touring under the 10cc moniker to put more bums on the seats. I guess the general public goes for the brand rather the actual quality of the show.

The Watford gig was cancelled last October as guitarist Rick Fenn was taken ill. This turned out a blessing in disguise as the rescheduled date became part of the tour were they were to play 10cc’s excellent 1974 album Sheet Music in its entirety followed by a greatest hits set. The reaction of the audience at the Colosseum to the most experimental tracks of Sheet Music was one of slight bewilderment. Even if Mick Wilson’s smooth voice removed some of the cartoon-ish humour of the originals, you could see people wondering what they had let themselves into while listening to tunes like  “Worst Band In The World” or “Clockwork Creep” with their weird time signatures and chord changes. However the album’s most well known numbers such as “Silly Love” or “The Wall Street Shuffle” and rarely played tracks such as the excellent “Sacro-Iliac” and “Somewhere In Hollywood” got a more positive response.  A technical fault during “Baron Samedi” forced the band to leave the stage early and come back to play the rest of Sheet Music and the greatest hits set in one go.

The second set was more familiar territory for someone who has seen the band in the past few years with note perfect renditions of their most famous songs. “Life is A Minestrone”,”Art For Art’s Sake”, “I’m Not In Love”, “Good Morning Judge”, “I’m Mandy Fly Me”, “The Things We Do For Love”, all these songs showed what an impressive run the band had in the seventies. A legacy that has probably a bit tarnished by the multiple reformations 10cc has gone through the years. The quintet impressed on the 11 minute song suite “Feel For The Benefit” from 1977’s Deceptive Bends album and the “barber shop” version of their first hit single Donna was full of humour and mischief. The  show with the obligatory “Dreadlock Holiday” that got the whole audience on their feet.