Home Blogs 100 Unhip Albums That We Should Learn To Love: Ian Moss –... 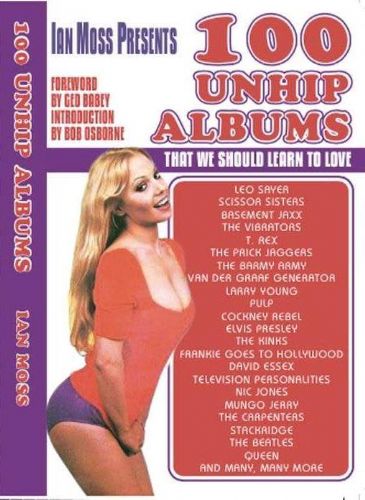 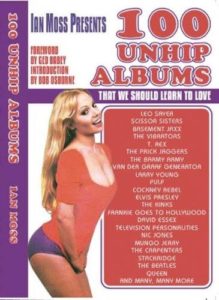 One of those books which is just an irresistible must-buy for music fanatics… Or the paperback equivalent of meeting a bloke down the pub who is a walking, talking encyclopedia of music, but is opinionated yet funny and knowledgeable?  Both, says Ged Babey as he pretends not to be biased and tries to avoid the phrase ‘Ideal Xmas gift for the relative with a massive vinyl collection’.

On the daily train journey home, I showed a work colleague this book. He counted through how many of the 110 albums featured he owned. ‘Eight!’ he exclaimed ‘Not as unhip as I thought!”. Thumbing to the section on one he had at home, he read the write-up and laughed out loud thirty seconds in, so that, I thought is a good recommendation.

This is a toilet book.  One you can pick up and read a few sections of when you know that you are gonna be in there a while… and before you know it you’ve been there twenty minutes because you became so fascinated that Rod Stewart or Edgar Broughton made an album which actually sounds interesting.

Musical snobbery has been around since Mozart was appalling audiences in the 18th century but now, with most music available to listen to for free on Spotify or YouTube, there really is no excuse to not give an artist another listen, even if you have foresworn them for most of your adult life or never even heard of them….

Says the Press Release.  And the Foreword, which is quite brilliant includes this….

This is not a book about so-called Guilty Pleasures. There is absolutely no shame involved at all – just pure, unadulterated, unfettered pleasure. This is not a Consumer Guide. There are no details of reissue dates, catalogue numbers and the best place to buy. Just find your nearest secondhand music shop –or try charity shops and boot-sales.

This is a book for music lovers and fanatics rather than music snobs…. people with huge record collections, but those who don’t strategically place the ‘coolest’ most fashionable records at the front, in case someone should pop round.

Things go in and out of fashion. Styles are revived and recycled. ‘What is considered hip is continuously changing.’ Is says in Wikiedia under its entry. Ian Moss has never given a monkeys about what was fashionable – if he likes it, he likes it –and wants to know more about it; the song the album, the artist. An avid reader of the music press –he has an encyclopedic knowledge and eclectic taste. You will find every genre covered here.

There is no ulterior motive to this book, no tie-in with a re-issue record label. No scores to settle. Only passion, with a disregard for fashion.

Yeah, I am proud to say I wrote the foreword after seeing a draft of about a quarter of the book, never expected my name to be on the cover, and can honestly say that it has turned out to be even better than I expected.  (My close friends will see an irony as I’ve tried SO HARD to be ‘hip’ during my formative decades – but finally I relent -I don’t care any more!)

And yes, the cover is a clever pastiche   but terrible!

Seriously folks, it is actually a really good read. One of those books you can dip in and out of whilst commuting, on the bus or on the bog.

You might think: Leo Sayer!  Mungo Jerry!  But there are so many great ‘lost’ albums in there, like The Saints, Subway Sect, the Vibrators, Pink Grease,  alongside supposedly lesser works by great artists:  the Kinks, the Who, Elvis (Costello and Presley).  Bands like Queen and Status Quo who became parodies of themselves in later years really did make superb albums in their day, which get overlooked.

Then there are the unfavoured folk, soul and jazz artists who are criminally overlooked in favour of bigger names and the downright obscure bands who put out superb records only to disappear without trace.

“Amusing and fact-drenched” says the blurb.  Bloody brilliant, says I – because it makes you jump from thinking,’Spot on’ to ‘Really?’ to ‘Bollocks!’ within the space of a few pages and then back again.  It’ll have you searching thru Spotify or rummaging thru charity shops, which-ever is your preference.