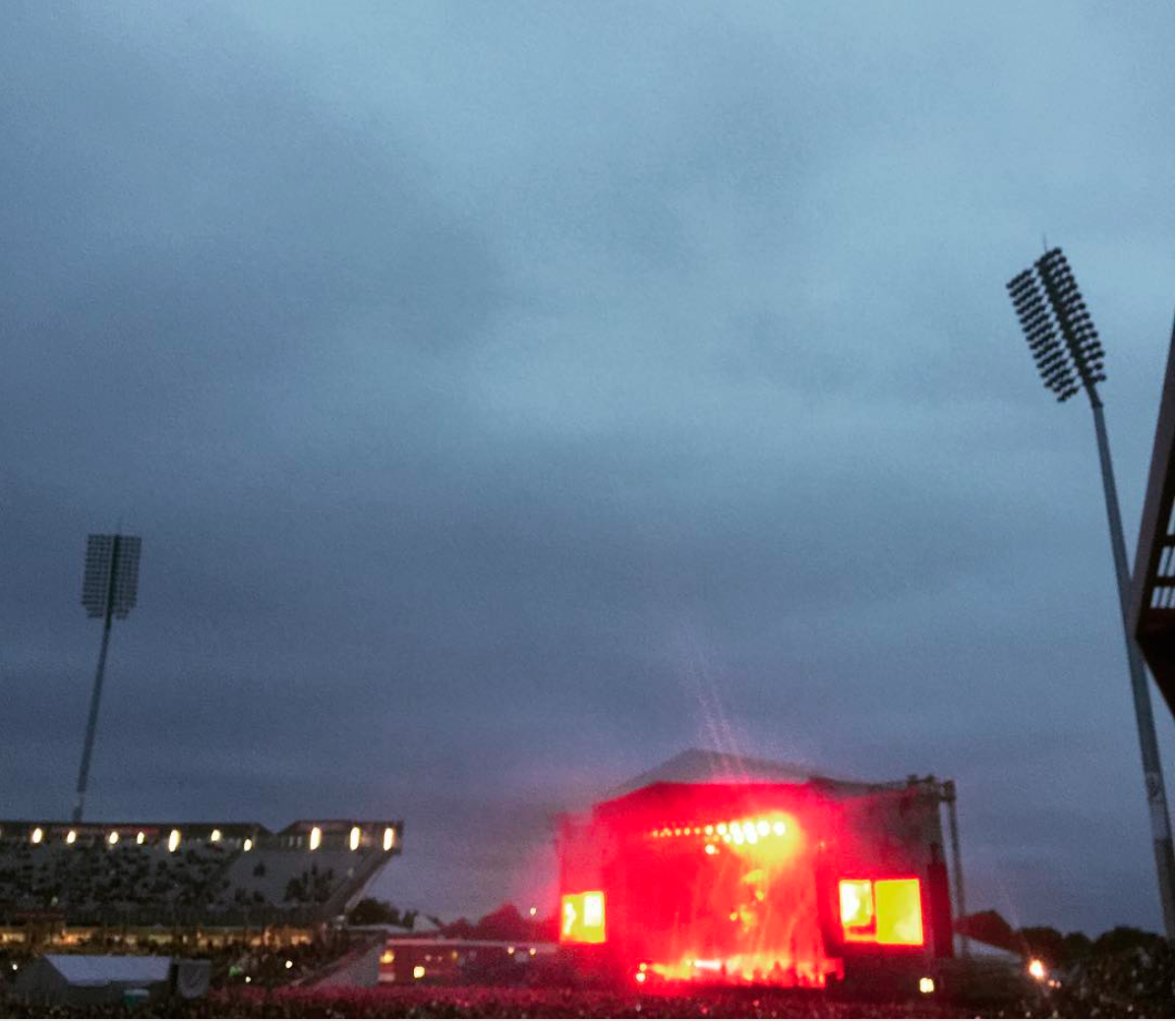 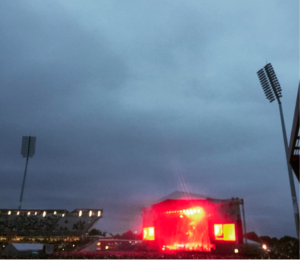 Radiohead have just played two astonishing UK shows at Glastonbury and in Manchester. A proper full review of the Manchester show will go up soon but John Robb was so blown away with the performances that he penned 10 thoughts…

1. What is thing called Radiohead?

They shimmer and float in the distance, intangible and yet addictive. Not anthemic and yet all pervading.

A band that can fill stadiums with none of the bombast and simple tricks of the form and spellbind the audience with their introverted and introspective songs.

A band that you can’t even see, hidden behind a light show and giant screens that never show their faces creating a hovering mystique and leaving the quixotic and experimental music to somehow pull the audience in. This rare for stadium rock and there is a sense of adventure with fluctuating set lists with strange and beautiful songs plucked at random from their impressive releases and a seductive intelligence and emotional subtlety that pulls you in without beating you around the head like is the norm for these huge gigs.

2. Somehow Radiohead have broken all the rules and won.

They prove that there is another way to make this stadium thing work.

Twice in two weeks I’ve been in the belly of this beast and enthralled by the sonic behemoth and the unlikely spectacle of watching a band that plays to thousands of people with none of the bombast and showbiz tricks that normally create the magnetic allure. First there was Glastonbury with its endless field and new age new generation optimism of youth embracing this classic band who slither through the generations and then Manchester in front of 50 000 people.

Creating spectacle out of the subtle.

Somehow Radiohead make this subtlety, intricate melodies and an experimental sense of adventure work in huge arenas in a way that no-one else can.

3. Initially there is a sense of detachment. You can’t see the band. It’s arena quiet and the drunk next to you is talking louder than the music and sometimes sings like a deranged hyena. Thom Yorke is not an easy singer to harmonise with especially with 10 pints of lager piss affecting the concentration. But then the magic happens. The spiders web of intrigue and emotion and slip sliding melodies draws you in. It starts with that voice – Yorke has an unusual and enthralling voice and as it soars its elixir gets into your veins and the melodies slip and slide through your mind. Then its the rhythms – unusual patterns that go beyond rock and then its the subtle shape shifting guitars and the bass – complex lines entwining and entangling. You feel the mood changes, the ebb and flow of the music and it’s hypnotic.

They have been hovering in the shadows for decades.

But here they are  the biggest band in the UK.

How the fuck did they pull that off and also how the fuck did they sustain it? It’s not like their albums were ever easy listening. Maybe early on with the Bends and of course, Creep, they were obvious contenders but they ran away from that post Pixies/Nirvana loud/quiet indie thing as soon as they could and into a world of introspection, angst and musical brilliance that can somehow can fill a stadium with joy and despair, tears and huge and unlikely singalongs. It’s like if Swans were a stadium band and no-one noticed.

4. There are deep emotions here – Thom Yorke’s soaring high voice is entwined around them and there is the added angst of his personal loss and grief embedded into the narrative giving older songs a new and different meaning. It’s powerful stuff.

I remember back in 1990 sat in EMI office as their A and R man played some of their demos. No-one wanted to write about them. They were seen as a major label plaything. They were not over achieving indie bands like the Roses or the the Mondays who were ruling the roost. No-one knew where to place them. I was going to champion them but the young buck writer at Sounds at the time, John Harris did the dirty work instead and helped to break the band with his enthusiasm.

Decades later I catch Radiohead twice in a week. At Glastonbury they are doing their second headline stint at the festival that seems to match their aspirations and ambitions. They soundtrack a couple of generations of music fans who want more and somehow those songs that are so introspective and sometime so heartbreaking work to thousands of people on different levels in different fields.

5. There is something truly remarkable about Thom Yorke’s voice and its soaring, cascading beauty as it communicates all those flickering emotions to so many pissed up people in a field. This really should not work. Surely the big stage is for the Bono style showmanship and razzmatazz, the big slogans and the powerful embraces. Glastonbury sees a very rare outing for Creep the song that broke them huge and the song that the band try to steer clear from but the biggest surprise is sometimes to play the most wanted song. By the time that anthem had become their Teen Spirit they had already moved on and away from the late eighties loud/quiet rock and onto their own trip.

It would have been easy and some say smart of them to continue in this Creep vein for a good few years,  after all stadium rock is not about change but replicating the same simple tricks over and over but the band were listening to the frontier music of the nineties and beyond. They were already immersed in electronic music – looking for new rhythms, new  textures and new ways – deconstructing their music on their own terms like Joy Division had once done by mashing the possibilities of electronic into the freedom of frontier rock and the two bands have so many parallels that is all makes sense in Manchester where it bookends proto post rock and future music in the city that birthed it.

6. Radiohead have kept moving. There have been recent explorations of avant classical from gifted guitar player and multi instrumentalist Jonny Greenwood – the cutting edge of post techno and then the post rock musics but they could still rock out as some of their crescendos prove at these two gigs where huge climaxes match the grey sky above the stage and the flickering shadows of the band create a multilayered, multi dimensional freak out before returning to the subtle ebbs and flows of their music.

They disappear inside their songs. You can’t see them. In Manchester a week after Glastonbury the stark lighting and the fuzzy images on the big screens make the band almost invisible. There could be no-one up there. For some this is hard work but I love this sense of detachment. This sense that there could be no-one there and yet…and yet…the emotional power of the songs pulls you in like an elixir, a strange perfume of melody and heartfelt stuff.

7. Like so many great British bands its the collision between hi tech of shapeshifting feeling that creates the spark. Radiohead somehow contrive to get a mass singalong out of almost nothing. Not that there music is not melodic. there are so many lush melodies entwined within the unconventional structure, when they play Karma Police for one of the encores its rolling chords that hang in the air like late period Beatles with the Sexy Sadie piano roll hovers in the warm and still night air and its outro ‘For a minute there, I lost myself, I lost myself’ section is sung back at the band with 50 000 voices that is strangely haunting.

Both sets are like this – a mixture of British pop perfection and that addiction to melody and melancholy with euphoria, the rainy day introspection that is so particular to this island and twisted and turned with a restless innovation. Their music does things to your head. That voice does things to your head. You think of people you love and people who have died. You suddenly become aware of the the jellyfish of emotional turmoil that wobbles inside.  This is a music that is ss dark as the Cure’s Pornography, as light as pop, as shape shifting at chameleon Bowie at his peak and as melodic as the Beatles in their mind melting late sixties acid test period. And they haven’t stopped moving. Last year’s Moon Shaped Pool album is as innovative as ever as the review here points out.

8. There are also moments of brilliant musicality, the rhythm section of drummer Philip Selway and bassist Colin Greenwood – those kings of limbs – is something else. This is a band that doesn’t stick to a  4/4 – every song has a different shape shifting rhythm, some of it influenced by the complex patterns in electronic music – that world of Aphex Twin and Autechre – where no rhythm is beyond the realm, it can be stripped down or it can be tribal powerful like on the strident 2 + 2 = 5  which builds and builds to an insufferably brilliant  claustrophobic climax, proof that the band can still rock when they want to – but rock on their own terms and they don’t half pack a punch when they want to.

9. Both sets are full of highlights like this and unexpected tracks. The band operate at their own speed and on their own trajectory. You go to them on their own terms. They turn Lotus Flower into something serating and tougher, they throw in You and Whose Army and The Bends to the delight of the faithful and their audience is utterly devoted all night a sea of hands and awe, flickering mobile phone cameras and heartfelt singalongs. It’s a great set list that pleases the awkward band and devoted audience.

10. Like other mainstream pop adventurers like seventies Bowie or late sixties Beatles, Radiohead are bringing their audience with them on a sonic adventure. People dance to those off kilter rhythms, they sing en masse to those deeply personal shrapnel lyrics, they feel the emotional tug and pull of the beyond the machine feelings and they sway around to the pop avant garde. It really shouldn’t work. Stadiums are not about subtlety, million selling records are usually drained of all the wonk and yet here we have one of the most daring musical bands in the UK packing out the huge cricket ground in Manchester or the main stage in Glastonbury and creating an intimate show in an arena of plastic cups and it works and is proof that pop and rock can still be such an adventure.