Home Blogs 10 thoughts on The Beatles ‘Get Back’ 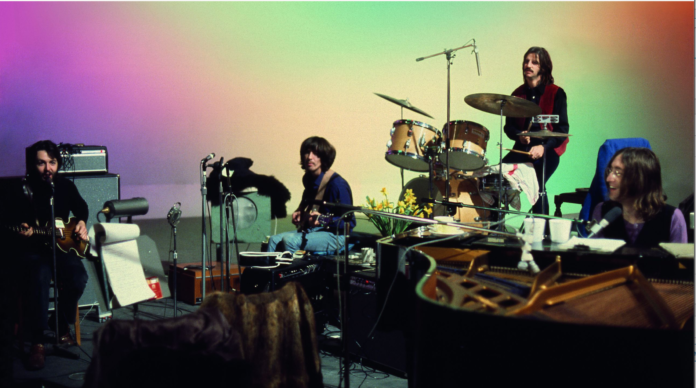 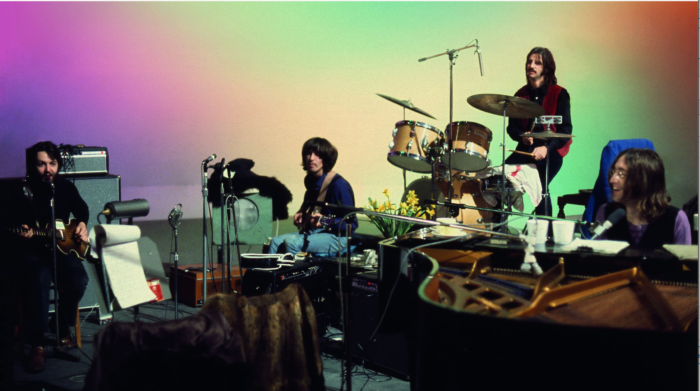 Just how shambolic were the worlds biggest band at this stage? They are stumbling around the cold early January warehouse looking for magic in the thin air. Despite the White Album still being number one worldwide they were seemingly cut adrift not touring and beyond the horizon and freezing and stressing over a new album already.  They sit there with no direction home and no plan. They give themselves 14 days to come up with an album and play their first gig for three years out of these new songs and film the whole lot. They have no songs and no idea of where they are playing the gig – it’s like Magical Mystery Tour all over again – a runaway bus with no destination. These days there would be a five-year plan and crucially a manager but somehow they make the chaos work – this is winging it on the grandest of grand scales and they are still so damn young: George was 26. Paul 27. Ringo and John 28.

On the other side of the psychedelic years, the dress down Beatles are all pullovers, misshapen trousers, worn-out pumps and furry coats – they have the hangover look for the hangover time – the sixties is ending with a whimper and not a bang – the pop culture hangover would somehow percolate through the seventies. The Beatles who were forever were already leaving the stage. Unlike other groups, they knew when to end – their most glorious decision in many ways. This was one horse that would not be flogged.

Despite all the mind-expanding drugs and the madness of the psychedelic Beatles of the preceding period, the strongest drug in the studio remains tea (apart from the various other drugs taken before they got in there!) and there is something so perfectly English and heartwarming about watching them drink cuppa after cuppa – their very creativity is driven by caffeine and tannin. The very mundanity and length of the film is its real magic. Hours of the Beatles trying to find their mojo is entrancing.

Paul is famously bossy but someone has to drive the ship and keep it from the rocks. You can feel the resentment from George and John but neither step up the breach and Paul is stuck with being the boss whilst Ringo looks on bemused. But then Paul seems to be the only Beatle who knows what they had was truly special and the one who is most reactant to lose it. It also has many moments when the tension is released and the jolly japes Beatles re-emerge.

5. The magic!
Suddenly out of the mark, the songs fall out of thin air – when Paul conjures up Get Back out of nowhere it’s magical to watch. The magic continues as it turns into a song – each stage reflecting each of the collisions and collisions in the rehearsal room.

Paul writes songs of quicksilver melody – brimming full of ideas – he’s non stop creative whilst treading on everyone’s toes. George is flowering and it was always amazing that the greatest songwriters of the decade both came not only from the same city but both ended up in the same band. It was an amazingly intuitive decision by the 16-year-old John Lennon to let the cocky confident and obviously supremely talented 14 years old Paul McCartney join his band. What is truly stunning is that George was now their equal and for 18 months the three great songwriters of their decade were fighting for space in the same band before exploding into solo careers.

7. All Things Must Pass…

Part of me thinks the last and only trick the Beatles missed was to have All Things Must pass as the final Beatles album – they had done everything else and the last exploration would have been a Beatles ‘George’ album – when they try out All Things Must Pass in the rehearsal and Paul and John join in on harmonies it is transcendental and although George’s first solo album is a classic and the best selling solo record from the former band members there is part of me that wishes it was the final swan-song and an embrace of all their talents behind the George vision and the title would have been perfect for the end.

1969 Beatles is a glimpse into the potential seventies Beatles – the ‘what if’ Beatles. There is something to be said about them being perfect for the sixties where they were owning every ripple and nuance of that decade and that the seventies would have left them high and dry and out of touch with the ensuing music directions. Would their brand of guitar pop have been stuck between a rock and a pop place in the poptastic glam and the earnest prog decade but they could have easily navigated these new waters. The raft of future solo songs and unfinished tunes they work on are, of course, tantalising.

9. Did they pass the audition?

The last gig proved that they were still great live. Woken up from their torpor there is more than life in the old dogs – Macca is a consummate performer of course but George and John were suddenly on fire after weeks of sitting around on the blue cushions. Despite the fluctuating tension, there are still moments of pure magic – the moments in rehearsal when Paul and John are locked into eye contact and the creative energy surges across the room – when they KNOW there is no-one better and their voices entwine and their music moves on its own ether – the ultimate in the communal mind.

His contribution at the end game was stunning – the piano parts he laid down are key to the songs and his vibe and presence was crucial.