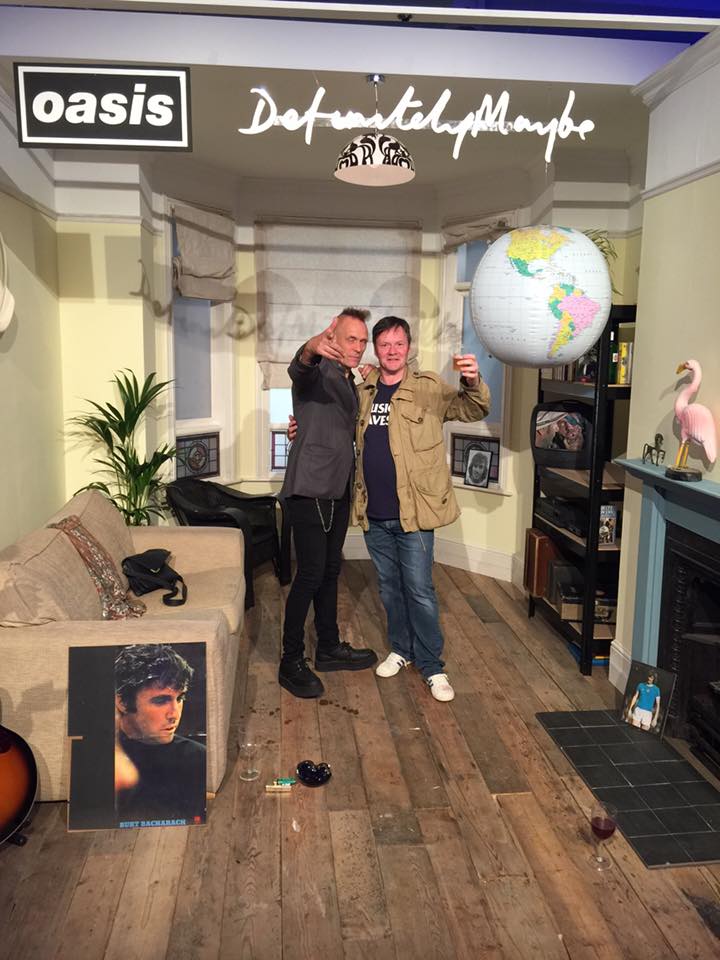 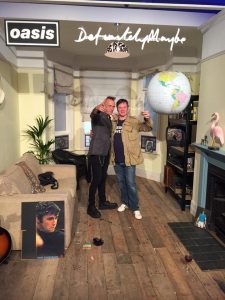 The Oasis exhibition at Old Granada Studios launched tonight – called Chase The Sun it’s a beautifully put together collection of photos, artwork, lyrics and pop art that details their career and makes you reassess the band…here are 10 thought whilst walking around the packed room

1. It’s an odd feeling looking at Oasis stuff like this and realising it’s sudden historical context. I got so used to them being in real time that it’s a jolt to realise that are actually pop culture strata and frozen into the past. What was once fast forward and high octane has now become a museum – and that’s cool – it just feels like a shock to realise. All bands have a white moment and Oasis kept their going for years and their history is oddly massive and opaque as they seem to have ended up loved and dismissed at the same time.

2. Oasis have oddly ended up being underrated. The music sounds fantastic. Blasting out as a backdrop it sounds enormous and full of the avalanche of sound. It’s become very fashionable to sneer at the band. Their monolithic status in the nineties – when the Gallaghers were the two most famous people in the country made them all pervading and everywhere and eventually too much for most people but the music stands the test of time – the songs sound huge and enveloping and were far smarter than Noel would ever admit they were.

3. What a great singer Liam Gallagher is – like Elvis he managed to make even the most nonsense lyrics sound like they meant everything. Like Trex the words could mean nothing and sound good or they could mean everything – there were moments of poetry and glimmers of sensitivity in the maelstrom, also moments of acoustic beauty and heartfelt emotion but even the playful fag packet doggerel sound like it means everything when Liam sings it and that’s an art in its own right.

4. The songs are, like the Sex Pistols, full of psychodrama and demons. The Gallagher’s tough upbringing was never put directly into the lyrics and Noel has always shied away from the lyrical confesional but you can sense the rage and the claustrophobia in the music – a rage and claustrophobia that struck a red raw nerve with so many people. The band were attempting to write music that took them out of their world and in this they succeeded but like all great music they are melancholia and euphoria rolled into one.

5. Oasis existed in a very different time – backstage photos of a knackered young band before a Derby gig are striking for the fact that they are literally twiddling their thumbs – whereas, nowadays, everyone would be staring at mobile phones – Oasis were the last big band before the internet era – the closing chapter in the blockbuster band era.

6. There is something of self fulfilling prophecy about the artwork that was so full of detail and ideas that it makes it feel that when it was been designed it was almost made with an eye for an exhibition like this two decades later. It’s so referential and detailed that it would need an exhibition ten times the size of this huge affair to cram it all in. Saying that they have covered it very well here and it gives you a real feel of the sense of adventure and no holds barred creativity of the period. A time of new Labour, optimism and anything goes cool that seems so utterly distant in these mean and pinched times.

7. The centre piece is the recreation of Bonehead’s front room which was used for the first album cover – I used to live round the corner in a house with exactly the same layout and it’s a double dose of deja vu standing in the middle of the iconic sleeve front room which was such a great idea – making micro Manchester iconic – the red brick terrace front room as prop! and also back in my own front room and remembering how small it was.

8. How gloriously iconic the band were and how defiant they were – as Noel Gallagher once explained to me in an interview about ‘ they cleared the stage for Blur to lead the Britpop charge and then we gatecrashed that party and they never forgave us…’ and you can see it in all the photographs that sense of rampage, that moment when a band arrives without permission and rampages into the mainstream – bands like that define lives and pack exhibitions like this for ever. With each photo you can sense the joy and madness of the band and of a distant time.

9. It reminds me of the young pre Oasis Noel – turning up at every gig in Manchester observing from the back corner with that attention to detail that is so part of Oasis – far from the two chord bluster that the critics nail the for the songs and the artwork dripped a complexity – a complexity of ideas and emotions that were far ahead of what they needed to be. The young Noel was a music encyclopeida, a music fanatic who knew his stuff. In many was the curator of the museum of british pop who built a band from all the best pop culture exhibits of the UK and created a juggernaut.

10. is the story over? Talk these days is that there are no bands, that rock n roll is dead blah blah blah but the room is full of hip sharp dressed youth talking excitedly of their bands and in bedsits and flats dreamers and schemers are out there plotting another future…