Home News 10 things you will see at the great Supersonic festival that you... 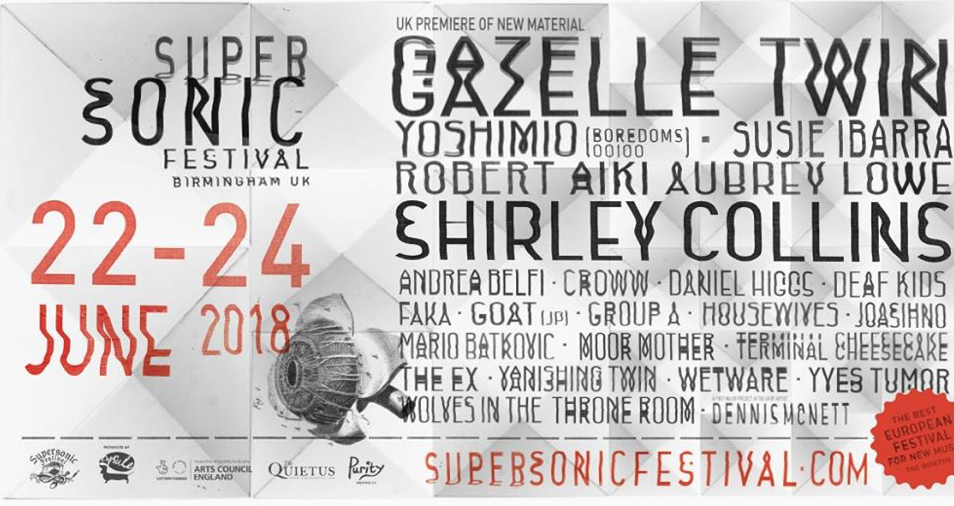 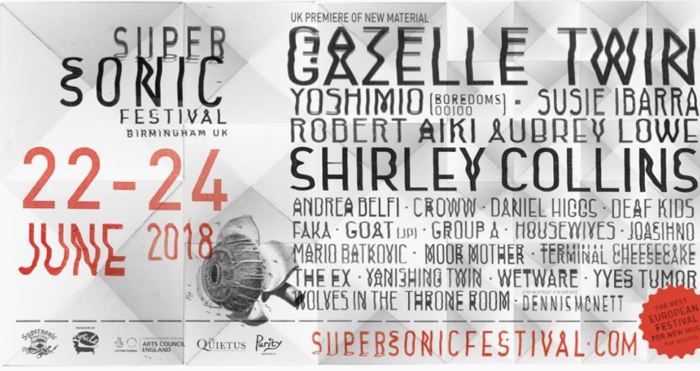 (Robert Aiki Aubrey Lowe, Supersonic guest curator and performing as Yunohana Variations for the first time. Photo by Andrea Fiumana)
SUPERSONIC FESTIVAL 22ND-24TH JUNE * RETURNING TO THE CUSTARD FACTORY
TEN THINGS YOU WON’T SEE ANYWHERE ELSE THIS FESTIVAL SEASON
All ticket details etc from here
TICKETS & FESTIVAL INFORMATION: https://supersonicfestival.com/product-category/supersonic/
The UK’s premier experimental music and arts event Supersonic Festival 2018 is taking place in less than one month on 22nd to 24th June in Birmingham, and in the count-down to the event – with a host of unique and exclusive performances and appearances to get excited about – we’ve highlighted ten things that you won’t see anywhere else this festival season.
1. Dennis Mcnett – first major UK project
2018 is a monumental year for Supersonic. This June, we bring to the back streets of Digbeth the FIRST EVER major project in the UK from prolific artist, Dennis Mcnett aka Wolfbat. As Artist in Residence, Dennis will produce a NEW large-scale work to embody the beating heart of this year’s festival. Supersonic musicians and audiences alike can work alongside Dennis in creating a series of large scale masks and costumes that will help bring the Supersonic beast to life and form part of a procession on the Sunday.
2. Gazelle Twin – premiering her new album
Following her Supersonic debut in 2015, we are delighted to be welcoming back Gazelle Twin this summer with the UK premier of an electrifying, brand new performance.
According to producer, composer and artist Elizabeth Bernholz- the genius behind Gazelle Twin- her inspired craft is ‘like a shedding of skin’; “tearing out of your body, down to your skeleton and breaking free.” In something of a paradox, what is signature to Bernholz performances is her masquerade-like use of costume, a catalyst in the process of releasing and replacing identity. In toying with anonymity in this way, Gazelle Twin bewitches audiences by masking the surface as a means of releasing what lies beneath.
In the years that followed her first Supersonic appearance, Gazelle Twin has gone on to face widespread critical acclaim. Gracing us with brand new material we are hugely excited for her return this year and are dying to see what she brings to the Supersonic stage.
3. The Ex will be leading the SUPERSONIC KID’S GIG this year
Big Sounds for Little People – if you couldn’t guess from the snappy title, it’s a gig, for kids and their families, which aims to introduce children to experimental music at an early age. Previous performers have included a variety of performers from Melt Banana and Richard Dawson.
This event is this year led by The Ex, who form a riot of sound and fury that’s both sonically adventurous and feverishly compelling. The Ex incorporates a wide array of musical influences, substantially from non-Western and non-rock sources, including Hungarian and Turkish folk songs and more recently music from Ethiopia, Congo and Eritrea. This event is recommended for children under 10.
4. Yunohana Variations – first UK performance
Three improvisational luminaries will perform live together for the first time in the UK. Multi-instrumentalist YoshimiO (Boredoms, OOIOO, SAICOBAB), avant-garde percussionist Susie Ibarra, and this year’s Supersonic guest curator – Robert Aiki Aubrey Lowe (Lichens).
The performance will explore spontaneous composition and showcase the freedom and musical immediacy of all three artists’ ability to interplay as well as their individual unique techniques to create engaging experimental sounds. This performance is part of the Outlands Touring network.
5. Moog Sound Lab – Moor Mother / Nik Void / Gum Takes Tooth / Brian Duffy
Supersonic Festival is delighted to be partnering with the internationally renowned Moog Sound Lab and The Royal Birmingham Conservatoire to create a four week artist residency programme. The Moog Sound Lab is focused on organic experimentation and is a unique opportunity for artists to explore analog sound-scaping, synthesis and effects. Artists who will be part of the residency include Moor Mother, Nik Void (Factory Floor), Gum Takes Tooth and Brian Duffy (Modified Toy Orchestra).
6. Connected Devices Sam Underwood + Graham Dunning – premier performance
Connected Devices is the working title of a modular mechanical musical instrument that artists Sam Underwood and Graham Dunning are designing and building. Somewhere between a giant music box and an obsolete knitting machine, it will play rhythm and drone as a two-player semi-autonomous instrument. We are delighted to announce that it will be unveiled at Supersonic Festival; including a demonstration of the machine and its debut performance.
7. Film composer Mark Korven debut uk live performance
Film composer Mark Korven (known for his haunting score for THE WITCH) and Tony Duggan-Smith have teamed up to create a musical instrument specializing in horrifying sounds called THE APPREHENSION ENGINE.
“The Most Terrifying Musical Instrument Of All Time” – Brian Eno
This will feature in the UK for the first time in Mark Korven’s debut UK performance at Supersonic Festival.
8. Mark Titchner – Find Your World In Ours
Ikon | 1 Oozells Square I B1 2HS | Free | 20 June – 8 July
Supersonic stages – throughout the weekend
Find your world in ours are a series of newly commissioned digital artworks curated by artist Mark Titchner and features films that explore ideas of ritual, repetition and collective experience. Artists include Anna Barriball, Sean Dower, Mustafa Hulusi, John Lawrence and Rachel Lowe. Reflecting Titchner’s interest in the intersection between visual art and experimental music these works are presented at Ikon and as large scale projections during Supersonic Festival across our main stages.
9. Deviation: A Surreal Life Drawing Experience
From  the strange  and abnormal,  to the beautiful  and repulsive, Deviation  aims to give people the chance  to experience drawing models, environments,  situations and installations which offer different  and interesting shapes, textures and lighting that aren’t  usually encountered within a normal life drawing class.
10. Juneau Projects – Spinal Tappers
A Percussive Instrument workshop by Juneau Projects
Join this drop-in workshop with Juneau Projects to create your own wooden percussion instrument to use as part of Dennis McNett’s procession piece. Select an instrument shape from a range of animal-based designs created by Juneau Projects and then assemble and customise it to create your very own unique ‘Spinal Tapper’. 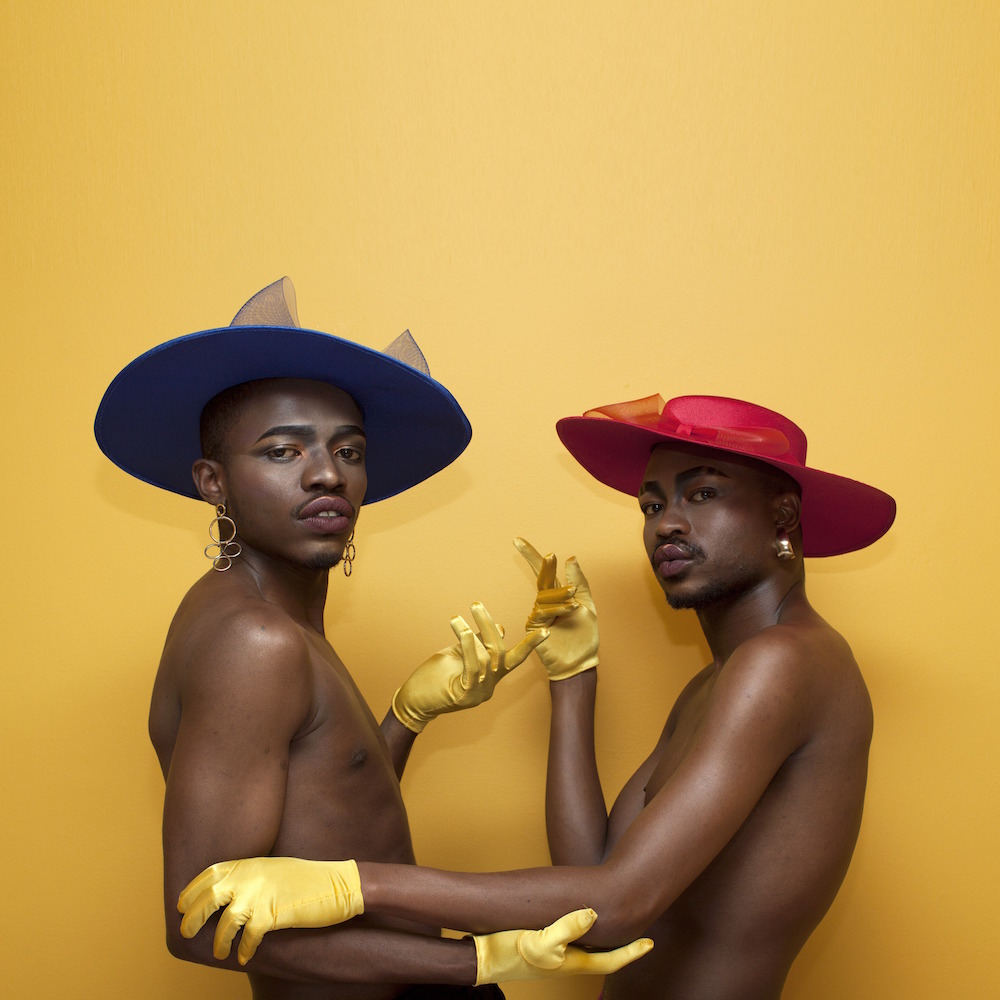 (FAKA debut UK performance, photo by Nick Widmer)
* * *
If the highlighted events have piqued your interest, there are many more exclusive performances ranging from Shirley Collins performing live and reading excerpts of her new memoir ‘All in the Downs: Reflections on Life, Landscape, and Song’, followed by a Q&A to debut UK performances from Faka, Angel-Ho and The Dwarfs Of East Agouza. Supersonic is proud to invite a wide spectrum of forward-thinking performers which also includes the likes of Mario Batkovic, Daniel Higgs, Andrea Belfi, Yves Tumor and Modern Ritual, the collective that features solo sets from acclaimed musicians Charles Hayward (This Heat), Laura Cannell and Hoofus (André Bosman). As well as a chance to hone in on your inner Ozzy, with the Black Sabbath Karaoke to summon your inner beast and to sing your heart and lungs out to your fave Sabbath anthem.
Additionally, Giant Swan have been confirmed for a right royal round off to Supersonic Festival’s Friday line up which kicks off the weekend in style with the following artists also performing;  Croww / Goat (JP) / Giant Swan / Housewives / Moor Mother / The Ex / Wetware /  Ideas of Noise –  curated stage of experimental sounds from the Midlands and beyond (With a programme spanning free improv, electronica, sound art, noise, contemporary classical and more, there will be a mixture of performances, installations, workshops and participation areas).
Saturday line up gains pace with performances from; Angel-HO (debut UK performance) / Andrea Belfi / Cattle / Connected Devices – Sam Underwood and Graham Dunning / DEAFKIDS / Faka (debut UK performance) / Gazelle Twin / Jennifer Walshe / Joasihno / Mario Batkovic / Nik Void / The Dwarfs of East Agouza / Vanishing Twin / Yerba Mansa Youth Man / Yves Tumor
Just when you thought it couldn’t get any better.. Sunday we bring you; Daniel Higgs / Gnod / Group A / Gum Takes Tooth / Mark Korven / Mesange / Modern Ritual / Olanza / Shirley Collins / Tomaga (performing the score to Lucifer Rising) / Trikilatops / Wolves In The Throne Room / UKAEA / Yunohana Variations – Robert Aiki Lowe + Yoshimio + Susie Ibarra performing for the first time in the UK. We end the festival with the Dennis Mcnett procession 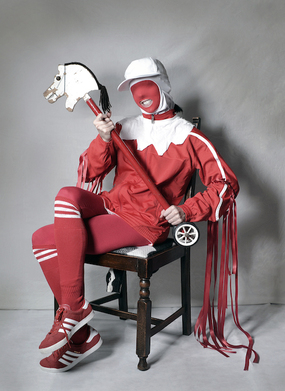 + talks/workshops/installations + much more throughout the weekend