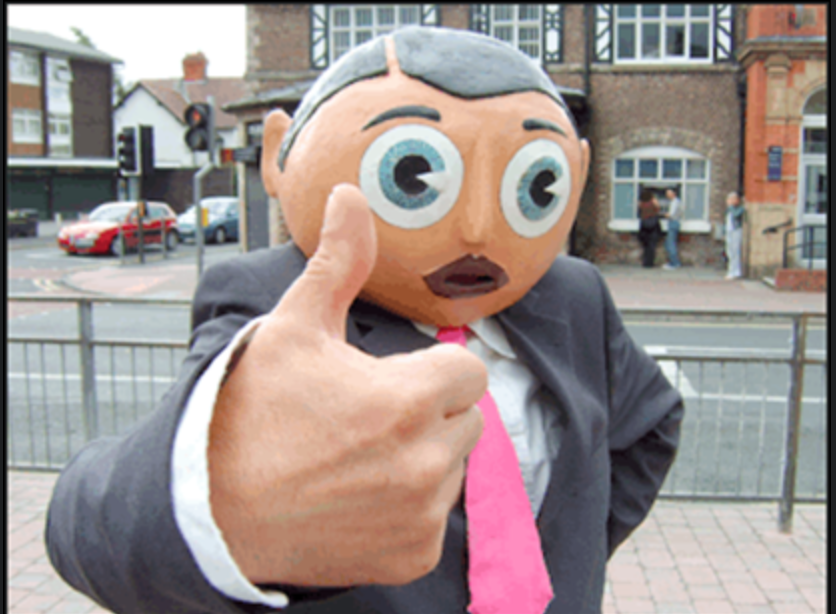 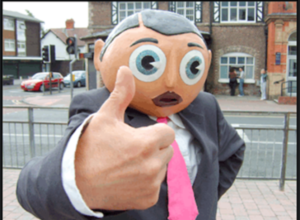 10 reasons you must go and see Being Frank

BEING FRANK: THE CHRIS SIEVEY STORY is the official documentary about maverick Manchester comedian Frank Sidebottom, and the life and art of his hidden creator Chris Sievey. This is a magical and melancholic film about the driven and brilliant, Sievey, who, once smitten by the magical world of the Beatles in the sixties never really let the Peter Pan world of pop. Living life like a one of the children of the revolution that never grew up, Chris forgot about real life to immerse himself in his own brilliant mind and its non stop flow of ideas.  With moments of blinding brilliance in-between years of being ignored and surrounded by the grinding reality of life his insane quest for pop fame saw him make songs, comics, films, computer games and finally the creation of Frank Sidebottom in a packed life that ended in 2010 after an avalanche of brilliant and wild ideas.

2. Anyone who has ever been this dangerously immersed in pop culture will totally get this film. Anyone who has lived their lives 1/10 as obsessed with the shiny baubles of mystical pop magic will understand Chris – the outsider artist of the genius of the suburbs, the eccentric jester in a land of fools and will get more than a moist eye at this story. Imagine a Syd Barrett style pop waif who didn’t even get the brief flurry off appreciation like the Floyd founder and had to end up wearing a giant head on a brilliantly mad surrealistic comedy stint and you get close to the mad genius of the man.

3. The film is a reminder of just how good the Freshies and Chris solo were. Of course they ended up being more famous as some kind of add on to the Frank story but they had a good run of ignored classic songs that were all misses in that time honoured cruel snub of showbiz. Their boisterous and highly melodic power pop should be revered like Rudi or the Undertones or The Replacements but is somehow trapped in the footnotes of another tale.

4. Of course Frank was hilarious but he was also a surrealist and a work of lunatic art. The film explores the odd relationship between creator and creation – the uncomfortable near rivalry as the comedy creation took him over clouding his one true love – music.  Former band members, his wife and kids all ponder the existential oddness of his genius and his efferefecent mind that never switched off and includes extensive archive from Chris’s personal collection of hundreds of boxes of notebooks, home movies, art and music. Insights from Chris’ family, friends, and colleagues, including Johnny Vegas, Jon Ronson, John Cooper Clarke, Ross Noble and Mark Radcliffe, finally reveal the unknown story of Chris Sievey – a songwriter, artist, comedian, husband, dad, and wayward genius.

5. There is something so Northern about Chris’s obsession with normality, the magic in the mundane, the tiny details of normal life that flicker with an odd fascination from the ripped cardboard and the bric a brac of daily life that Chris immersed himself in and created insanely detailed art from. It’s that kid of world that Mark E. Smith or Half Man Half Biscuit also occupied – the twisted reality of the everyday turned dayglo.

6. Pop culture for the dreamers is a magical world full of glowing brilliance – pop culture, in reality, is a grinding conveyer belt of averageness that has no time for the likes of Chris Sievey and it’s this endless snubbing that is a deep part of the melancholy of the man and the film. Initially making jokes out of the rejection letters and the non embrace of the world that opened up to him after he discovered the Beatles is heartbreaking. His music is worthy of a revisit – some of the solo stuff is an achingly brilliant psychedelia that, if he had been a small town American eccentric, would have been hallowed turf by now.

7. Frank is up there with Dali in his surrealistic brilliance – the psychodrama of his relationships with his cardboard cut out side kick, Little Frank, is genius and his ad hoc, no script, off the cuff brilliance should have been treasured and not shunted to the side by the boring world of nailed down mainstream media. Tellingly it’s the brilliant Johnny Vegas who explains this – another northern com ic who somehow managed to let his off kilter free form wit thrive in the terrified mainstream – unlike Frank who had a couple of years of kids TV fame before being too brilliant for their mundane prisons.

8. John Cooper Clarke is a great interviewee – the charismatic, shamanic, power genius is fill of shards and snippets of wisdom. A decade ago I saw John and Frank perform together at a gig in Leeds to 15 people. They were both brilliant that night. John has managed to get his deserved lap of honour and is now a anational treasure whereas Frank’s last gig was in my local pub to ten die hard fans. If only. If only.

9. Chris was a complex and complicated man and the film doesn’t hide the darker sides of his personality and yet even his darker side of the drinking etc is treated with affection by the people who loved him. His late son tells a moving and hilarious tale of late period Chris the alcoholic who he told he wanted his dad for Christmas only to go round to his father’s flat to find Chris wrapped up in gift paper and smoking a fag! It’s a tall that’s all the more poignant when you realise they are now both sadly dead.

10. The film is funny, warm, engaging and sad. It lets the subject breathe. It doesnt try to analyse – how can you analyse something so brilliantly absurd. It’s full of the north and the weirdness of the real north. It’s a great portal into a pop culture world of possibility flashed up by the sixties and broken by the eighties – a world where obsessed and artful geniuses like Chris would never fit in and their childlike grasp of real life saw them trampled and pushed aside and yet as an encore, with Frank, ultimately getting his revenge running amok in the corridors of showbiz.