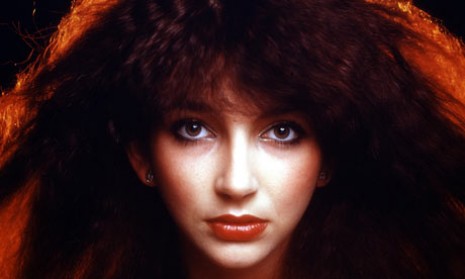 LTW recently gave Kate Bush’s album a brilliant review but not everyone was happy about this . One of the site’s freelancers, Ged Babey struck back….Ten Reasons I Hate Kate Bush… a blog by Ged Babey …Just One Guys Opinion…

10 Reasons I Hate Kate Bush? Well, not Kate Bush the person, she’s probably very nice… its Kate Bush the Artist and her Music I hate … but then again , I am a curmugeonly old punk-rocker and this is just what they call click-bait….but I do mean-it-maan…

1/.  She was not Punk Rock. Despite being a teenager in 1977 she seemingly missed out on the most exciting, vibrant music of the time, choosing instead to read books, grow her hair and hang out with Dave Gilmour.

2/.  She hung out with old farts like Dave Gilmour. And Eric Clapton. Why? She could’ve worked with young talented musicians of her own age. Great musicians from the post-punk era. Also that apalling version of the already atrocious Rocket Man by Elton Fuckin’ John…when she professed to liking Killing Joke’s drumming ??

3/. The drama-school mime business going on in all her performances. God it looks so ludicrous now… Was it to detract from her voice, the pretentious lyrics? Bowie dabbled with mime, but soon grew out of it and knew how to rock. Marcel Marceau was a tool; ridiculed by Kenny Everett and Rowan Atkinson to memorable effect  Mime was never cool. Theatrics are for the theatre.

4/. Kate Bush’s songs and music had no real soul. She was play-acting through all those early songs. They were her pop adaptations of literary works for Christ’s sakes, so how could they have any genuine, heartfelt emotion in them? They also have no groove… you can’t dance to Kate Bush records; she wasn’t punky and she sure as hell wasn’t funky… I guess it was brain-music rather than body-music.

5/. The songs were all surface and no feeling. They were all arty artifice with no real emotion…. see Public Image’s Death Disco for an example of getting pain and feeling into pop. Kate Bush told fairy stories and acted-them out Am-Dram style whilst trilling like a canary and making all big-eyed, big-lipped facial expressions. It wasn’t rock ‘n’ roll.

6/. The socio-political comment in her later material was bogged down in pretentiousness and just didn’t really work as ‘protest music’ as it was too dull in its rich musicality and pompousness. Army Dreamers and Dem Heavy People are not Bloody Revolutions, Anarchy in the UK or even Give Peace A Chance are they?

7/. She was definitely not New Wave, so therefore Old Wave and even once she regained control of her career and made decent music (Hounds of Love) she seemed prematurely old and boring and serious because she didn’t want to be perceived as sexy…..why not go the full Sinead then?  The complete lack of spontaneity in her work and reliance on studied classicism just annoys me.

8/. All this critical re-assessment of Kate Bush is just because she’s doing a few gigs… before she gets too old to do it… there is no need to elevate her status to sell tickets, as they sold out in 15 minutes anyway. Basically though it’s her final hurrah, and I hope it’s good and worth the price of admission, but all this press bullshit is an attempt by journo-scum to illicit free-tickets for themselves (plus 1).

9/. Kate Bush was not and is not a genius. She had a few great songs and lots of pretty dull ones. She is a dedicated artist, a single-minded perfectionist and very successfully a private person and not a celebrity, which is cool, but not a genius, like Bowie or Nick Cave or Billy Childish…

10/. She is ultimately responsible for Tori Amos, Florence & the Machine and millions of other pseudo-pretentious female solo artists who aspire to be as kooky and profound as Kate but are nowhere near as original and devoted to their art.  Not KB’s fault really but still a crime against rock’n’roll all the same.

If you’ve got tickets for the London gigs Kate fans – Enjoy. I don’t really detest her with a burning passion that I reserve for real cultural villains, I just can’t see what all the fuss is about. Different strokes for different folks I guess.

Kate is beautiful, unique and dedicated to her art and doesn’t do any real harm, but in the same way as I think the Kinks were as good or better than the Beatles, the Sound were every bit as good as Joy Division, I cannot see that Kate is any more a godlike genius than Chrissie Hynde, Debbie Harry or Siouxsie Sioux.

All words by Ged Babey (written in less than an hour – no edits -punk rock style, for a laugh and to wind people up, as well as saying wot I fink).

(These thoughts are not neccesarily shared by the rest of Louder Than Wars staff and writers).

Public Enemy: What You Gonna Do When The Grid Goes Down...