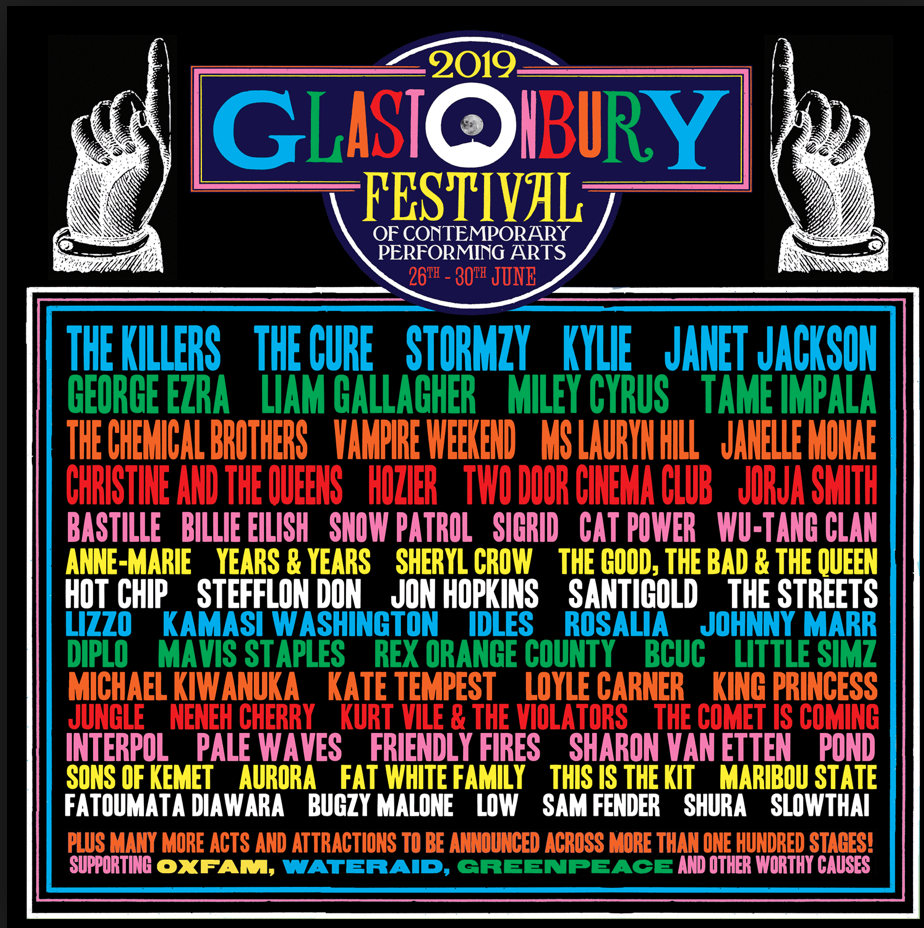 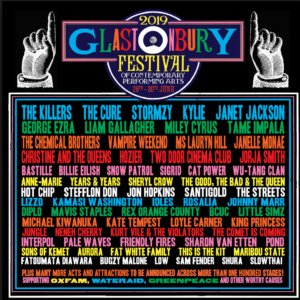 At the end of Glastonbury 2017 I bumped into Nick Dewey and Emily Eavis who book much of the legendary festival and they talked of big changes for when they came back in 2019.

In some ways, the festival remains the same – stunningly diverse huge and there is no huge fabric tearing. Everything is roughly in the same place. But they have stretched the fabric further and included more big pop ascts, nodded at the youth – who are making Glastonbury their own but always keeping the spirtit of the event that was always about so many styles of music.

This year is was huge, diverse and sprawling  – a true reflection of 2019 music from the pop juggernauts to the explosive new noiseniks like Fontaines DC, IDLES and Queen Zee to digital raves to grime to The Cure 41 years in and playing their third huge Glastonbury gig of their career and delivering one of the greatest gigs of all time.

In short Glastonbury was brilliant and here are 10 reason why.

For a genuine music fan who like an aural adventure Glastonbury is a sonic dream come true. As ever walking around the site is a wild cross section of a bubbling pot pourri of music.

In one ten minute stroll I could hear Turkish gypsy music, the cutting edge grime of SlowThai, punk rock, Janet Jackson and Fat White Family all cranking up the electricity – is there any other festival in the world that can claim to be this diverse – surely that’s the point of Glastonbury?

2. Step out of the comfort zone

Rule one – try not to get comfy with the tried and tested – Glastonbury is the chance to go off at the deep end – whether that’s free techno jazz at four in the morning or whether it’s watching Janet Jackson playing her pop hits with a backing band that are so tight that they sound like AI robots delivering heavy dark grooves that are closer to the industrial grind of Nine Inch Nails than pure pop then it’s all adventure. Janet Jackson actually delivers a  staggeringly powerful performance and it’s great to see industrial music sneaked in on a major festival main stage. Whilst kicking the dust of your heals maybe take in a bit of Kylie to embrace 21st century vaudeville showbiz before dashing off to the uncomfortable comfort zone of IDLES who are storming it three fields away.

3. David Attenborough and the war against plastic

The biggest crowd of the weekend are there to see a 95 year old man deliver a brilliant speech on the main stage thanking the festival for going plastic free. Glastonbury is a huge operation and it’s a damn hot sweaty weekend where the water bottle would have been the main currency in past years. With an effective sweep its ugly planet wrecking carnage has been dented and the bottle already looks like a weird cranky thing of the past and the huge operation to cut back on the poisonous toxic world of plastic convenience is working.

The first home grown black act the headline Glastonbury main stage is, of course, a powerful statement but apart from that Stormzy’s set was brilliant and proof that new music can easily headline the festival. Proof that you may only need one or two albums before you get the big field. Proof that you don’t have to have forty year history to make the main stage. Proof that charisma and talent are also enough. Proof that learning to play a guitar is not the only way to make game changing music. Proof that the future is now and it all works.

5. Hubble bubble…toiling in the bubble

The 5 day city of Glastonbury appears like a magic vision and being there feels like a forever. It’s great to be in the bubble – the much criticised bubble but sometimes you need to supercharge with like minded souls. Intense conversations with beautiful people is good for the soul! . Especially with the backdrop of a festival that is a multi sensed dayglo sensual assault and reminder that life can be informed and fun. Ideas bounce around the ether and music fires the soul!

6. Green is the colour

The Green Fields are still a great break from the intensity of the dusty lowlands. Perched on top of the hill these are the glades of counter culture and a mixture of silver wizard old hippie ideals and 21st century tech culture.  Zippies and cosmic warlords are still dreaming the counter culture dream from water powered wheels with their new neighbours tweeted idealism.

In the modern Trump-world it’s nice to be anywhere with people who still believe that somehow we can make the world a better place – whether it’s with yoga or taking on the bullies that shout down at us.

Further down the hill Billy Bragg’s Leftfield stage is dealing in the same kind of idealism albeit in a more pragmatic manner. Here they say that to change the world you have to engage with the politics of it argues Billy armed with his trusty guitar and a coterie of politicians and fierce young bands like Fountains DC who deliver one of the sets of the weekend – an intense and explosive affair that reminds me of the dark power of Joy Division who I saw all those years ago.

It may seem to be about the big statements. The juggernaut gigs on the main stage and the BBC prime time moments edited into heavyweight technicolour but the micro moments are what make the festival. There are so many random meetings along small pathways. So many new friendships forged in the heat of the moments, so many causal conversations or intense wild eyed chats about music and life and culture. This is the real Glastonbury you don’t get to see on TV.

The middle aged naysayers sat at home typing furious missives deep into the night about music/life/the world being better in the old days are having their annual field day – but not in a field. If Glastonbury itself is an annual tradition so is moaning about it. The Guardian comments section is overloaded by wired typists banging out missives about Jay- z, Kanye West or Stormzy headlining the festival – praying for the days when good, sturdy, old time, solid white rock acts could play their two hits again instead of these supercharged icons of the new century.

The Nay sayers griping and typing are possibly jealous of their offspring who are all here. Glastonbury is a generation who don’t care about their dad’s typing away missives about the old days – they want their pop culture now and they want their pop culture delivered through something that reflects the Spotify model – that old and new all at the same time thing – a digital world where classic old bands are as new as the newest thing rising fast out of the underground.

9. Stone circle sunsets are a student rite of passage

Banging drums and whooping at the new dawn is oddly touching. A live forever moment.

10. An umbrella festivals of tents

Glastonbury is unique in that, like London, it’s not really a city but a collection of small towns all built around small stages. These stages – each one a microcosm and a world within a world are as diverse as the Crows Nest perched on top the hill with great in conversations to from the humongous industrial party space of Shangri La that booms into the night with its own live acts like Sleaford Mods and the Damned and big sound system DJs and a commitment to lunatic partying deep into the rising dawn to the tiny 20 capacity spaces where equal intense action occurs. This stuff never ends and the high decibel glow will last a year.