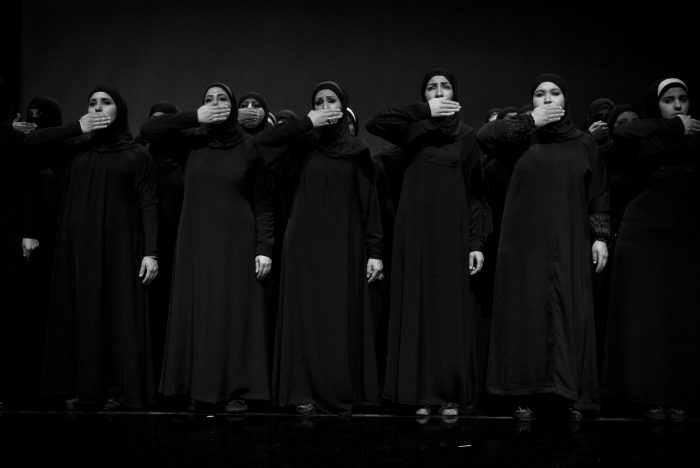 ‘I have a scream I want the world to hear’

In a post-Brexit world where our nation seems reluctant to even take in scared kids fleeing genocide then Queens of Syria that gives refugees a voice becomes a must see work.

Performed by an all female cast of 13 female Syrian refugees it is a modern adaptation of Euripedes’ anti-war tragedy The Trojan Women, melding the women’s own narratives of war and bitter exile with the ancient Greek text.

This genuinely ground-breaking production has been winning rave reviews and comes to the Courtyard Theatre at West Yorkshire Playhouse on Monday 18 July.

The lives of original cast members were changed as people listened to their often harrowing stories and Maha said: “Doing the play impacted our lives in so many ways – now we are all Trojan”

That view was shared by Khaula who noted: “We came into a new society, a new way of life: we were isolated. Doing this play helped us break the ice; we started to connect with others and make friends.

“It gave us the courage we needed to talk about our problems frankly and clearly. We feel that we can do something for Syria, and the Syrian people, by sending a message to the whole world – hopefully someone can help us end this tragedy.”

Acclaimed young director Zoe Lafferty worked with the cast, and her work has focussed on current conflicts, political power imbalance and situations of human rights violations. It has taken Lafferty through wars in Afghanistan and Yemen to those working at the heart of some of the pressing issues in the UK.

Zoe Lafferty said, “I feel privileged to work on this production that directly voices the powerful story from women that have survived war and are currently refugees. This piece encompasses the many challenges they have face whilst being a celebration of life, a declaration of hope and an exploration of the future.”

In January 2014 West Yorkshire Playhouse became the country’s first Theatre of Sanctuary, a public statement and recognition of the commitment to being a place of safety, hospitality and support for refugees and asylum seekers.