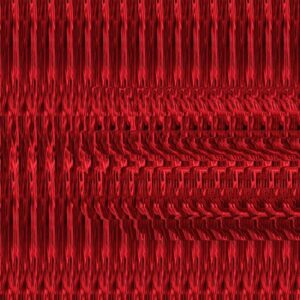 The symbol of red thread is an endemic and integral element of folklore narrative. Taking on various interpretations, it translates in different cultures as an allegory of fate and unity. Drawing from a Russian fairy tale, where yarn is a recurrent motif of a journey, Moscow-based four-piece band Дочь (Daughter) unveils a new dimension of this collective mythology on their first album Нити (Threads).

Originally the brainchild of singer and composer Yana Smirnova, Дочь also features Tatiana Sopenko (backing vocals, lyrics), Nick Efremov (keyboards, bass), Danila Vetrov (guitar) and Michail Pilyavsky (keyboards, programming). Three out of five emerged from the cult chamber-pop collective with a name too perplexing to a foreign ear – Krasnoznamennaya Diviziya Imeni Moei Babushki (The Red Standard Division n.a. My Grandmother). Yana was at the helm as a singer and songwriter, while Tatiana played the drums. Nick worked closely with the band as a sound engineer. Consequently, he invited Michail to join the new project.

In keeping with the name, the album has a gauze-like sound, where sonic elements intertwine as if they were threads in a fabric. Woven with layers of ethereal synths, it evokes the allure of post-Cobra Stereolab and the retrofuturist stance of late Tame Impala. Although it’s likely these artists have fed into the concept, there are a few exclusively Russian references, making this material more distinct. On Forget-Me-Not, the vocals of Yana, heavenly distant yet velvety and warm, echo Colibri, a Soviet all-female collective, with a theatrical stance and sophisti-pop sound. It reverberates through decades, leaving one with a sense of wistful yearning. Some tracks on the album reveal melodic undertones of traditional folk song, regardless of its origin. Унеси Вода (Take Me, Water) sounds hypnotic, with bubbling synths and floating singing akin to those in Bjork’s music.

With their titles as brutally short as the band’s name, all songs are concepts; Окна (Windows), Нить (Thread), Незабудка (Forget-Me-Not). In some cases they are recollections, either personal or common;  they evoke the intimacy of kitchen talks or shared memories of former classmates. Headliner is a playful hymn to serendipity, with the narrator looking back at the first encounter with their favourite artist, who becomes a collaborator years later. Sometimes it seems the stories are addressed to a listener with similar tacit knowledge. All songs are sung in Russian. Nevertheless, these narratives are open for interpretation, inviting a stranger to step into the world of their protagonists. In fact, bridging various music references, this music brings up the universal experience of loss, love and longing to be understood.

Taking off with an ambient-meeting-downtempo intro and suggesting a few reliable radio hits in the course, the album reaches its peak on Поле (The Field). A-heart-on-sleeve and tuneful song, it leads to a cathartic chorus. A lush sound fades out to unveil a stripped-down pre-recorded acoustic fragment and fades in, lavishing waves of harmonies onto the listener.

For those who would like to keep fingers on the pulse of Russian avant-pop, Дочь is the right call. It would be interesting to see them performing alongside Bella Union acts. Regardless of the potential turns on their path, this band are ones to watch.

Нити is available for streaming here.